Minions
Mechaclones are the robotic footsoldiers of Neo Empire Gear and antagonists in Choudenshi Bioman. They move in a very jerky manner and make clanking sounds while walking. They typically wield bladed weapons or ray guns that fire lasers.

The Mechaclones were created by Doctor Man to be a disposable soldier force for the Gear.

When the Biomen were assembled to combat Gear, Mason led a team of Mechaclones to assault them, but the Biomen fought them off.

Several Mechaclones were part of an army of past enemy gruntsthat were fought by the Gokaigers in Los Dark's ghost dimension which housed the 1500 spirits of the villains defeated by the Super Sentai. After losing some of their number in an initial skirmish, the Mechaclones merged with the other remaining grunts to form the Combined Combatant. Though the stronger opponent, the Combined Combatant proved to be unstable due to internal conflicting among the grunts composing him over who got to finish the pirates off. Taking advantage of this, the Gokaigers used the Battle Fever J Ranger Keys to destroy the Combined Combatant with the Penta Force cannon. 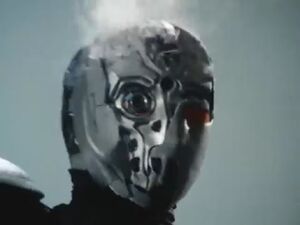 A Mechaclone's head is busted open, showing its true face.