Fighting against both Godzilla and Kong.

Kill all of the Titans for Apex Cybernetics so that humans can become the permanent dominant species (formerly).

Mechagodzilla is the main antagonist of the 2021 film Godzilla vs. Kong.

It was a mechanized kaiju created by Apex Cybernetics in order to exterminate every Titan in the world, so that humans would remain as the dominant species on Earth. However, it would later fall under the influence of King Ghidorah and instead sought out to destroy both Godzilla and King Kong.

Initially, Mechagodzilla had no distinct personality, due to the pilot controlling the mech. It would only act and follow based on the pilot's command. However, upon being exposed to the Hollow Earth's energy, the energy merged with Ghidorah's neural networks, causing Mechagodzilla to go haywire. Ultimately, it granted the mech a personality of its own. As a result, Mechagodzilla became a relentless killing machine that was determined to kill both Godzilla and Kong, as well as any humans around it.

There are instances where Mechagodzilla was shown to exhibit traits similar to that of Ghidorah, such as its roar, as it was a slight mechanical mixture between Godzilla's and Ghidorah's. Like Ghidorah, Mechagodzilla began to show signs of great fear and dread the moment it was faced with imminent death when being chopped by Kong's battle axe, as it attempted to escape from his wrath. Oddly enough however, Mechagodzilla doesn't appear to display the same traits as the left head, despite it being connected to this particular skull of Ghidorah. This might suggest that, while Ghidorah is influencing Mechagodzilla, he isn't directly possessing it and that Mechagodzilla's newfound consciousness could be its own entity entirely. Another possibility could be that the left head as Mechagodzilla has no interests and curiosity for humanity and is only focused on destroying those around it, likely learning from its past defeats at the hands of Godzilla.

Mechagodzilla was constructed by the technology conglomerate Apex Cybernetics in the aftermath of Ghidorah's apocalyptic rampage in 2019. Using the skull of Ghidorah's left head, a cockpit was made to control Mechagodzilla through radio waves. The pilot used was Ren Serizawa, the son of Ishiro Serizawa, who would enter a trance while piloting the mecha. The purpose of its construction was to exterminate every living Titan on Earth so that humans can become the apex species.

Mechagodzilla is first seen in an enclosed Apex facility in Hong Kong that Maddison Russel, Josh Valentine, and Bernie Hayes locate after they stowaway on a carrier containing Skullcrawler eggs. Mechagodzilla tested its might against an adult Skullcrawler, using its brute strength alone to grab the Skullcrawler and slice it in half with its energy beam (known as the Proton Screamer). Apex CEO Walter Simmons later reveals his intention to harness energy from the Hollow Earth to overcome the limitations of Mechagodzilla. Following an excursion to the Hollow Earth, Apex manages to contain a stone containing a piece of the energy and use it to upgrade Mechagodzilla.

Following the battle of Godzilla and Kong where Godzilla defeats Kong, Simmons saw this as his opportunity to test his invention and activates Mechagodzilla. However, the energy influx causes Mechagodzilla to malfunction, electrocuting Ren to death. The mixture of the energy source and Ghidorah's neural network "awakens" Ghidorah's consciousness, causing it to possess Mechagodzilla. It overrides the controls and kills Simmons before breaking out of the Apex facility.

Mechagodzilla then goes on an uncontrollable rampage across Hong Kong, destroying everything in its path with its Proton Screamer before confronting Godzilla. Haven grown weary from the previous battle against Kong, Godzilla is swiftly and brutally overpowered by his mechanical counterpart, who blasts him with its various weapons and throws him around the city. Fortunately, Nathan Lind revives Kong by using his Hollow Earth vehicle as a defibrillator, and Jia convinces him to help Godzilla. But even with Kong's assistance, Mechagodzilla still proves too strong and is able to overpower both kaiju. Before it can finish them off, Mechagodzilla stalls after Josh pours Bernie's alcohol onto the robot's control panel. Godzilla then uses his breath to charge up Kong's axe, enabling him to dismember Mechagodzilla before ripping its head off, ending its brief reign of terror. 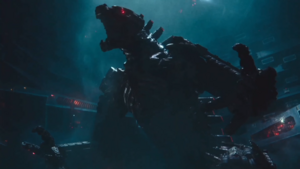 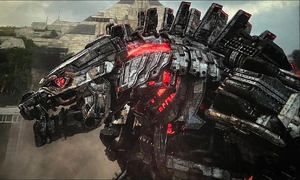 Mechagodzilla's demise.
Add a photo to this gallery