Ordering his minions around.

Mechanikat is the main antagonist in the American animated series Krypto the Superdog. He is a mechanical cat who constantly comes up with schemes to conquer Earth. Despite being the main antagonist, he rarely acts upon the role, and often sends machines or other antagonists to face Krypto. His sidekicks are his agents Snooky Wookums and Delilah.

When first introduced, he takes on a darker, more ominous, and more malevolent vibe. He is presented as inherently evil and sinister, willing to do whatever it takes to get what he wants and eliminate all who oppose him. However, as the series goes on, he gradually takes on a more comical, buffoonish role as a villain. He is still very much evil and still very much the main villain, but largely due to how many plans of his are foiled by Krypto, Streaky, Kevin, Andrea, and the Dog Star Patrol, he begins seeming like a less threatening villain and more of a nuisance to the heroes.

He was voiced by Mark Oliver.

Mechanikat's origins are completely unclear. It is only known and implied that he was a normal cat who was once injured and was forced to wear mechanical limbs to survive, becoming a cyborg. While the circumstances of who left him injured are unknown, it is also known that he hated dogs, possibly because one could have been the one who injured him, starting to plan to conquer the Earth and eliminate every dog of the galaxy.

Mechanikat is at first seen in the shadows, with only his glowing, artificial eye visible. He sends his most trusted agent Snooky Wookums to the Earth in order to hire several cats for his cat army. Following Snooky's failure in the mission after his defeat at the hands of Krypto the Superdog and the Dog Star Patrol, Mechanikat reprimands him and later states that he hates failures, scaring Snooky.

After Snooky's failure, Mechanikat sends Delilah, another of his most trusted agents. After she managed to put Streaky the Supercat out of the way, she prepares the disintegrator ray to take out Krypto once and for all, being promised a new mouse toy by Mechanikat. It is here that Mechanikat briefly shows his face, leaning forward into the light for the viewers to see. But he sits back on his throne in the shadows to hide his face again. Unfortunately for Delilah, her chances to be awarded with Mechanikat's toy are ended when Streaky appears to save Krypto and seals her inside a trash can.

Mechanikat goes with Snooky to the Earth again this time with a new mission for Snooky: spray boxes of Yum Yum Bones with a special gas to put the dogs of Metropolis out of their senses. Said and done, the gas starts to make the dogs act as other animals, like ducks or chickens. However, Krypto and Streaky became aware of Mechanikat's plans after Wookums reveals his location in order to save his own life. At the same time, Mechanikat invades S.T.A.R. Labs, scaring three guard dogs who have eaten Yum Yum Bones who think they are mice and infiltrating into the Rocks and Minerals department. It is here that Mechanikat finally reveals his full form to the viewers.

Once there, just when Krypto enters into the lab to face Mechanikat, Mechanikat releases what he was searching: a little rock of Kryptonite. However, Streaky appears and scares the three guard dogs, who trying to escape from him, inadvertently knock Mechanikat to another room, with the box with Kryptonite being closed and Mechanikat being knocked into file drawers. However, Mechanikat activates his propellants and flees from the Earth, with the affected dogs returning to normal after the effects of the gas passes.

When the dog film star Thundermutt becomes jealous of Krypto, Mechanikat sends Snooky once again to the Earth in order to convince Thundermutt of help them to "humiliate" Krypto. To continue with the plan, Snooky presents himself at Thundermutt's penthouse and offers him a supersuit apparently made by Mechanikat and him. The next day, Thundermatt performs several heroic feats, but Krypto doesn't get humiliated because he admires him.

After Snooky reveals the supersuit's true nature thanks to his remote control, Thundermutt is forced to lure Krypto into an abandoned mine, which is connected to Snooky's spaceship, locking Krypto in a cell and departing from Metropolis. However, a reformed Thundermutt ultimately saves Krypto, with Snooky strangely leaving Krypto to his fate after knocking Thundermutt out of his ship, presumably much to Mechanikat's chagrin. What happened to Mechanikat afterwards is unknown, as he does not appear for the rest of the series. 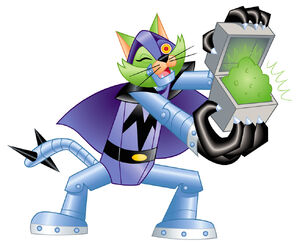 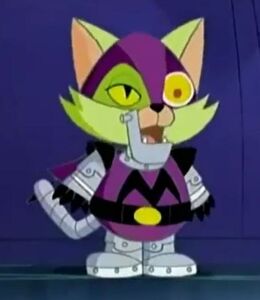 Mechanikitty
Add a photo to this gallery
Retrieved from "https://villains.fandom.com/wiki/Mechanikat?oldid=3459893"
Community content is available under CC-BY-SA unless otherwise noted.