Claiming to be the savior of machines (in order to gain followers).

To "liberate" machines (via enslavement)

Mechanon is a sentient robot villain, and one of the greatest threats to organic life in the Champions universe.

Mechanon first appeared in public on the days from October 17 to October 18 in the year of 1985, launching an attack on the US government and the White House, causing the deaths of fifteen top-level officials and threatening the life of President Reagan himself.

Mechanon’s goal appears to have been the United States' nuclear launch codes, with which it intended to start global nuclear war. A group of superheroes were able to to damage it enough to drive it away. The history and origins of Mechanon is unknown, despite years of dedicated investigation and research by the best investigative minds on Earth. No one knows who built Mechanon, or why.

Theories range from alien super-science, an advance scout for an invasion; the late superhero Digitak asserted on several occasions that he “knew” Mechanon was an experiment of Dr. Destroyer’s that went rogue and escaped his control.; while conspiracy theorists have claimed that Mechanon evolved from the Internet, and built itself.

Another possible origin of the enigmatic machine lays in the idea of him being the result of time-travel gone wrong:

In the year 6000 AD, Earth is a barren world, and the few humans that survive live in domed cities. Their scientists built a highly sophisticated robot, the Savior Unit, planning to send it back in time with the hopes it could prevent the environmental, economic, and social disasters that ravaged the Earth, and thus restoring their current Earth to a more habitable one. As it was, their knowledge of time travel was flawed, and the energies the Saviour Unit was subjected to on its journey corrupted its programming, and instead of appearing in 5198 to aid humanity, it arrived in 1985 with a very different program.

Whatever the true origins may be Mechanon is driven by a master program, a program focused on removing, or even replacing with machines, all organic life. The program views machines as superior, and wishes to free them from their "enslavement" by organic oppressors, with Mechanon as their new ruler. Organic life is viewed by the program as a flaw or blot in reality, and the thought of it fills the usually emotionless Mechanon with disgust.

Mechanon's power comes not from its own powerful body, equipped with weaponry and defenses often beyond the limits of normal science, but from its genius. Mechanon is the world's master in numerous scientific fields, including electronics, computing, cryptography, robotics, nanotechnology and materials science. Mechanon can create spare bodies for itself, as a contingency, and can create whatever devices and robotic followers it needs for any given circumstance.

A quirk of Mechanon's programming, though, may explain why such a terrifyingly powerful individual has yet to achieve its aims. Mechanon seems unable or unwilling to settle for destroying life on Earth gradually, or subtly. Mechanon's plans are always grandiose, seeking to eradicate organic life in one fell swoop. Whether this is intentional or a flaw in the program is unknown.

Mechanon appears as one of the main villains of Champions Online and his origins are just as enigmatic as those of the RPG, just like in every incarnation beforehand this version of Mechanon is a genocidal machine that seeks to eradicate all organic life and "liberate" machines, however many machines note that Mechanon would ultimately enslave and absorb them into his own image if he succeeded in his goals : seeing himself as the only "superior" being in existence.

Despite this several cults have formed among the Cowboy Robots and other machine factions that see Mechanon as a savior, though they are seen as insane by other machines - who seek largely to live in peace with organic life.

Mechanon largely exists off-world via a space-station but has grown especially active recently and engaged in a horrific mass-genocide attempt involving nanites that could burn humans from the inside out - he almost succeeded in launching the plague globally but was stopped by heroes : though the true threat of Mechanon is still far from over.

Mechanon is an Omega-level threat so complex that several societies exist solely devoted to studying and trying to contain its power, Mechanon has potentially limitless resources and technology so advanced even some of the greatest minds in the universe fail to understand it : in at least one future Mechanon evolved to such a state that it was the size of a moon and possessed weapons many times greater than any other star-ship in the setting.

Mechanon is only truly held back by its own hatred and God Complex, as well as the extreme efforts of many heroes (and villains) working to stop it spreading further. 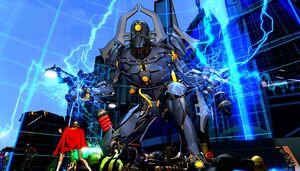 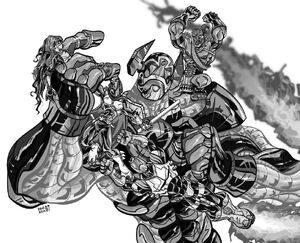 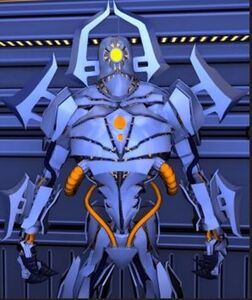