Evil Clone
Mechaturtle is an antagonist from the Teenage Mutant Ninja Turtles video game for the NES console. He is the boss of the third level.

The turtles return to their lair. The place is trashed when they arrive. Suddenly, Shredder greets them with a message: Splinter has been kidnapped and they must rescue him. They search Wall Street in their custom van. The van reaches a road block and the turtles are forced to walk. They encounter many obstacles such as foot soldiers and robots. Eventually, they find Splinter on top of a tall building located at the end of Wall Street.

After ascending the stairs and defeating more obstacles, the turtles find their master tied to a post. He is being guarded by Mechaturtle; a robot who almost resembles them.

It begins to fight them. Both sides are almost equally matched except the turtles are stronger. Moments later, Mechaturtle sheds it's skin, revealing its identity as a robot.

It uses heat seeking missiles and bladed arms to annihilate its foes. It fails after enduring too many attacks. Mechaturtle explodes and the turtles rescue Splinter.

Mechaturtle's skin is half blue and half green. It wears a tan headband and joint pads which are the same color. Its shell is dark green. Mechaturtle's inner appearance is a robot that is completely red.

Mechaturtle wields a sword that is similar to the one Leonardo uses. However, the sword doesn't inflict damage (possibly due to incomplete programming). Mechaturtle can perform the same flips and jumps that the Ninja Turtles are capable of doing. In its robotic form, it deploys heat-seeking missiles. Also in the second form, Mechaturtle uses blades instead of a sword. 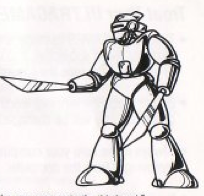 Artwork in strategy guide
Add a photo to this gallery

Retrieved from "https://villains.fandom.com/wiki/Mechaturtle?oldid=3296579"
Community content is available under CC-BY-SA unless otherwise noted.