Medazeppi is a minor villain in the manga/anime; Bleach. He's one of Szayel Aporro Granz's Fraccion.

Medazeppi was voiced by Richard Epcar, who also did the voice of Zangetsu, and Myotismon from the Digimon series.

Medazeppi does not talk at all, instead making certain gestures and noises to show what he is thinking. Medazeppi seems to have an extremely low tolerance of pain and becomes completely berserk after being simpally cut by Renji's Zabimaru.

Medazeppi spiritual pressure is unknown. While Medizeppi may have great physical strength, he also has incredibly low durability, see how a single cut on his palm led to him screaming in severe pain, and having a serious panic attack. He's also somewhat skilled on hand-to-hand combat, able to greatly injure Renji.

Medazeppi is a very large Arrancar. He has disproportionately long arms. He has clown-like black hair that protruding from each side of his head. Medazeppi's Hollow mask cover part of his face, his entire right eye and nose. The hollow mask also had teeth coming out of the bottom. His left eye is all-yellow and he has a dark pink stigma as an eyebrow. His arrancar is nothing special, just a typical uniform that arrancars usually wears.

When Szayel Aporro got bored with battling Renji, he summons his army of Fracción. As Szayel's Fracción appear, one of them named; Medazeppi emerges from a panel in the room's roof. As their master explains about Fracción to Renji and that each of them were genetically altered. Medazeppi attacked Renji with his colossal strength, knocking the lieutenant into the ground. When Medazeppi was about to kill Renji, Renji managed to cut Medazeppi's palm, which caused him to have a panic attack. Just when he was about to kill Renji again, Medazeppi gets pierced through his midsection by an arrow from Uryū's bow, result in killing him. 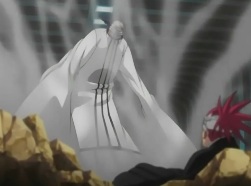 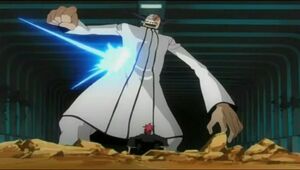