Being devoted to Heart.

Eliminate most of the Roidmudes except for a select few including her and Heart.

The Medic Roidmude, otherwise known as just Medic, and originally designated as Roidmude 009 is a major antagonist in Kamen Rider Drive. She is a female Roidmude, a robot who possesses the capability to "evolve" and become more human, and holds the ability to heal injured Roidmudes. Prior to becoming an Advanced Roidmude, she was a low-class Cobra-Type Roidmude.

She is a very heartless woman, a symptom caused by her using her healing powers. When she heals, she takes in the negative emotions of the Roidmudes, making her much more cold.

She was portrayed by Fumika Baba.

6 months prior to the start of the series, Roidmude 009 was among the Roidmude combatants that made their attack during the Global Freeze. After assuming a human form based on a woman named Misuzu Hatori, she evolved into the Medic Roidmude and gained her healing powers, which she used to heal Misuzu.

However, Medic was placed in a coma due to her healing powers being rendered powerless when she healed some of the Roidmudes, including Heart. It took Volt Ghost's attempt at a Dark Christmas Eve to revive her back to consciousness. However, Misuzu's recovery was only at 50%, leaving her unable to walk and making her mute.

Medic was first seen by Drive and Mach when she arrived to retrieve the Gunman Roidmude's Core after it was destroyed. She also said hello to Krim Steinbelt, now Drive's belt.

She later reappeared to spirit Chase away from Drive and Mach after the latter destroyed the Cores of both the Gunman Roidmude and Roidmude 018.

When Chase regained his memories, Brain deemed him a threat and attempted to eliminate him, but Heart stopped him and instead let Medic have her way on fixing Chase instead. Upon Roidmude 096's destruction, Medic, Brain and Chase attacked the riders again. When Brain got heavily injured by Mach, Medic called for a retreat.

Medic later founded Reaper Legion, a new division of half-evolved Roidmudes altered by Medic to assume the Grim Reaper's task and eliminate rogue Roidmudes, as Chase can now no longer attack Roidmudes due to his new programming, which changed his objective of protection from 'humans' to 'Roidmudes'. Instead of destroying the rogue Roidmudes forms and resetting their cores, she and her Reapers would secretly eliminate their Cores, believing that these 'defective units' would get out of the line again no matter how many times they have been reset. The newly formed legion's first hunted for Roidmude 072 and promptly destroyed him.

Drive objected to her new way of doing things as the new Reaper, calling her more of a demon and assuming Type Dead Heat to vent his anger from seeing Roidmude 072 destroyed. After assuming Dead Heat Flare, he initiate a Dead Heat Drop and injures her, calling forth her true Roidmude form, much to her disgust. Medic later escapes by using her Reapers to cover her.

Medic and the other Roidmudes later staged a plan to defeat Drive. They started by eliminating human templates that past Roidmudes used as their human disguises. Knowing that the Shift Cars would mobilize, they were captured and brainwashed by Medic to be Chase's assistants. While Heart delayed Mach, Chase confronted Drive, and overpowered him with the enslaved Shift Cars.

However, the plan failed thanks to Shift Formula's interference, saving Drive, Kiriko and the Shift Cars as he overpowered Chase. Having failed in the plan, she ordered the corpses to kidnap Kiriko and brought her to Chase, until Mach interfered, calling him a coward for toying with people's lives. Medic appears and agrees with Mach, but felt curious about Chase's reprogramming as one of the Reaper Legion attacks the Rider. Later, she ordered Chase to attack after being informed that Brain had weakened Chase's firewall. Medic revealed to Brain that she increased Chase's destructive impulse at max level, meaning that she can order Chase to kill anyone that she wants, before freeing him.

When Brain was defeated with his Core surviving, Medic put off restoring Brain's body, leaving him stuck as a Core following her around.

Medic began to experiment on the Super Evolution state of the Roidmudes, using Cook Roidmude to induce, which resulted in several losses. Her experiment was later exposed by Heart, as he aware about her hurting friends, particularly the murder of 072.

In the midst of being nearly-killed by Dead Heat Mach's Rider Kick attempt, Heart came in to save her and unveils his Super Evolution form. After days of disappointment with Brain, she restored his body just before Roidmude 006 came in to inform them about Tornado Roidmude's death and his possible intention to achieve Super Evolution, leaving only one left to attain it soon.

Medic watches the investigation on the hospital from faraway as the plan comes in. Brain is curious of what she plans but Medic forces him to take care of her pet dog. She later disappoints that her plan goes slowly. Brain protests his cooperation to Medic again and getting turned into a Core as a punishment. Banno appears and forcefully attaches himself to Medic. Despite the Banno Driver-controlled Medic overpowering Mach and is about to kill, the Super Evolved Heart dashed in and removed Banno from Medic. Medic turns Brain back to normal and orders him to bring her dog away. Later, she chokes Kazuya and asks him about Misuzu until Drive Type Tridoron frees him. Drive theorizes that Medic wanted Misuzu so that she can evolve using her love emotion. Medic's dog approaches Misuzu, awakening her and simultaneously turns Medic as an open target. Chase tries to kill her but Drive stops him.

An untransformed Shinnosuke peacefully asks her of what happened. At first, everyone thought she is undergoing another inhumane experiment but Shinnosuke realizes that all she wants is to awaken her in order to achieve Super Evolution. After Gold Drive and Brain showed up as Banno possessed 006's husk to transform into Gold Drive before easily defeats Drive and Chaser, she agreed to his offer for help. She later awakens in Banno's Lab, as Gold Drive had finished throwing away the impurities in her heart, now allowing her to achieve Super Evolution based on her love emotion without any resistance. After the dog passes by and arrives on Misuzu, she finally achieved her Super Evolution form and defeats Dead Heat Mach and Chaser.

She was later reprogrammed by Gold Drive and turned her into a puppet, much to Heart witnessed her actions and getting dismay. Gold Drive orders Medic to capture Brain to complete the gathering of the Promised Number, but in the middle of the battle (while the Riders fight the Reaper Legion), Brain secretly implants something on her back before she retreats.

With Brain later "surrendered" and his participation to occur the second attempt of the Global Freeze, all Four Super Evolved Roidmudes and Roidmude 004 went to the Promised Land to activate the Sigma Circular. But after activation, Sigma's energy directs her as a sacrifice as part of Gold Drive and 004's plans, revealing that the latter implanted a modified target program to ensure for her "death". However, Brain using his manipulation to transfer the programming within her to him instead, saves her but putting his own life in jeopardy. After Brain dies, she and Heart turn on Banno to avenge their fallen comrade.

After being spared by Dead Heat Mach from Banno's trap in lakeside, Medic and Heart arrived at the SSDC headquarters and saved Go from Gold Drive's near-death attack as they sides with the Kamen Riders. Leaving Mach and Chaser battle against Banno in a parking level, the three proceeded to Sigma's hideout. Medic alongside Drive and Heart fought and defeated the remaining three Reaper Legionnaires, Medic tried to save their Cores but they instead exploded. She soon realized that she had lost that ability ever since she woke up, hinting it as Banno's final trap. As the second Global Freeze has taken action and Sigma evolved, she was left behind and being weakened. As Sigma is about to kill Shinnosuke, she finally arrives as her body disintegrates but in her final moments, Medic's Core assumes the form of the goddess she was from the first Global Freeze, healing Shinnosuke before evaporating.

When Roidmude 089 hosted a brief alliance with the remnant terrorist organization, Shocker, as well as the Kibaoni Army Corps from a parallel Earth, Medic told Brain to calm himself when he voiced his offense and contempt for the Youkai page Kyuemon Izayoi, when he rejected Heart's friendship. Heart noted that from the humans' point of view the Roidmudes would indeed appear to be monsters. Later on, at their hideout, Medic believed Brain was being 'silly' again when he alerted Heart to a giant robot which he saw charge past the window, with her and Heart having missed the sight as the Ninningers set off to fight Kyuemon's Giant Roidmudes. 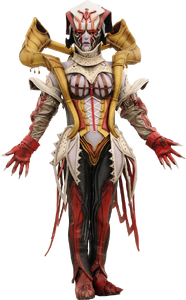 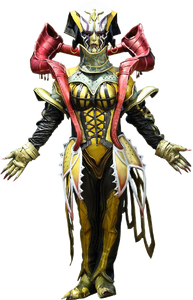