Watching her collection of petrified victims

Mythological Monster
Medusa (Japanese: メディウサ) is one of the most recurring bosses of the Castlevania series, fought in many games ever since the very first one. She is a very powerful snake woman based on the Gorgon of Greek legends, who served under the Vampire Lord Walter Bernhard and then under Count Dracula. She often appears along the other original bosses; and serves as the inspiration of the Medusa Heads, one of the most infamous enemies of the series.

She was voiced by Mary-Elizabeth McGlynn of Silent Hill fame in Castlevania: Lament of Innocence.

She appears in most games as the snake-woman described in legends (although she always lacks the bat-like wings of her mythological counterpart). In some games however, she appears as a giant Medusa Head who flies around the screen; (probably a nod to the legend in which Medusa was beheaded by the hero Perseus). When defeated, she usually turns into stone and shatters.

Medusa wields pretty much the same powers in every game she appears. Her primary powers are of course her petrifying gaze, but she is also able to spawn snakes (and sometimes Medusa Heads), to conjure objects and cast many other spells. She mostly attacks by swiping her tail, but she can also wield a sword, a shield and a bow. She is very strong, fast and nimble, and can spew venom that harms and poisons the player, needing to be cured.

Medusa's personality is mostly unknown, as she usually attacks without words. In the only game in which she speaks, she is content with welcoming her prey with false, threatening courtesy, relishing at the prospect of adding a statue to her collection, though she takes offence at being called a monster. Judging from that and her only uttering threats and insults in other games, she appears as vicious and bloodthirsty.

In the first game of the series and its first remake, Medusa appears as a giant disembodied head. She does not uses her petrifying gaze and instead floats around forcing Simon Belmont to avoid contact, and spawns snakes as projectiles.

Medusa appears in the most famous remake of the first game, but is very easy to defeat. She moves back and forth and spawns snakes that slithers on the ground towards Simon, and is able to fire an eye-beam that temporarily turns Simon into stone, paralyzing him and vastly amplifying the damages he takes.

This arcade remake of the first game presents Medusa as a statue which animates herself to battle the player. She moves back and forth while spawning snakes that slither on the ground towards Simon, and poses little threat.

In these remakes of the first game, Medusa attacks with tail-swipes, either normal ones or spinning aerial ones, with four snakes projectiles, and with her petrifying beam, here a purple beam from her hand.

Medusa attacks with a sword at contact, spawns snakes on the ground and fires a circular eye-beam that petrifies the heroes at contact. If this happens, Medusa will conjure a bow and fire at the heroes until they get better.

In this game, Medusa is fought in the final level, after Elizabeth Bartley summons her to stall John Morris and Eric Lecarde.

She attacks following a defined pattern but without her signature snakes or eye-beam: first by spitting fire into two interconnecting wave then as a straightforward blast, then by swiping her tail, then by dashing forward several times. She must be targetted between her attacks.

Medusa is fought when Shaft summons all the bosses of the original game (minus Death), to wear out Richter Belmont and Maria Renard before fighting them himself. She can prove very challenging and attack with a jumping tail swipe, three snakes as projectiles, and her petrifying eye-beam.

Castlevania: Symphony of the Night

Medusa can only be fought if Alucard was able to free Richter Belmont from Shaft's control and enter the Reverse Castle. There, he must track down all the bosses of the original game to gather Count Dracula's body parts and confront him.

She is very resilient and can prove quite bothersome. She attacks mainly with a sword and uses a shield to block Alucard's blows. (The shield is useless at very close-range.) She also attacks with her petrifying eye-beam and if Alucard gets struck, she will unleash a very damaging lighting spell. As such it is advised to have the Fairy Familiar around to cure Alucard immediately.

Medusa only attacks with a sword and she is fast and swift. If Sonia Belmont stays in the spot in the room where Medusa cannot reach her and attacks at distance, she will not pose any trouble.

When she is defeated, her severed head flies away in a nod to her appearance as a disembodied head in some games, and to the Medusa Heads enemies.

Medusa is fought in the Underground Waterway, meaning that only Henry Oldrey and Carrie Fernandez can fight her, as it is a level for them alone.

Medusa is pretty fast and mostly attacks by dashing toward the heroes to swipe her tail at them. She can also spawn many snakes on the ground that stick themselves to the heroes to hinder them (if this happens strike with the secondary weapon), destroying the snakes provides items. She will also conjure a bow with which she fires three arrows at once and a shield with which she blocks the heroes' blows, forcing them to strike repeatedly to destroy it.

When she fires her petrifying eye-beam, the heroes must jump to avoid it or get encased into stone and left open for an attack. Medusa's tail swipe shatters the stone but there are occurrences in which she attack with her bow until the heroes die. When wounded enough, Medusa will become able to turn invisible for a surprise attack.

This game reveals that Medusa was a servant of Dracula's predecessor Walter Bernhard before working for the Count.

She appears as a giant disembodied head with monstrous snake-like features. She flies around mostly over the ground and bites Leon Belmont with her snake-hair, but she can also fly away and attack with streams of venom that poison Leon and must be cured, a large number of snakes, a volley of rocks, and her petrifying eye-beam. Should Leon get turned into stone, Medusa will rebound around the room to deal heavy damages.

Medusa is quite powerful in this game and has many attacks. She can dash towards Jonhatan Morris and Charlotte Aulin, wave her tail to harm the heroes, turn her arms into snakes that lunge forwards, conjure a flurry of yellow Medusa Heads that petrify at contact, and fire her petrifying eye-beam. If she manages to turn the heroes into stone, she will take profit of their weakened state to transform into a giant snake and strike them.

Medusa is very agile and spry in this mobile phone game, and can jump over to avoid Desmond Belmont's attacks. he attack with her sword, her petrifying eye-beam and a swarm of Medusa heads to overwhelm Desmond.

The Medusa Heads are flying disembodied namesake heads looking exactly like Medusa's own decaptitated head. The relation between the boss and the enemies is never truly explained but they seem to be a spawn of the gorgon. The yellow ones are able to petrify the hero at contact, paralyzing him/her and vastly amplifying the damages taken when under this form.

They are hated by many gamers due to their tendency to swarm the area en masse while appearing over and over, their ability to knock the player backward, and the fact they are quite hard to hit with regular weapons. They most often appear in complicated platform sequences to harras the hero without end, punishing the slightest mistake by making him/her fall from the platform; which means restarting the sequence from scratch at best, an instant game over in a bottomless pit at worst. 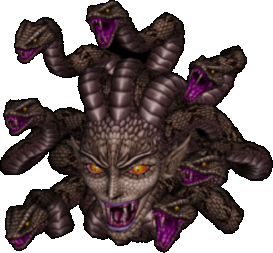 Medusa as a giant disembodied head. 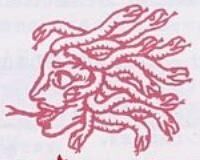 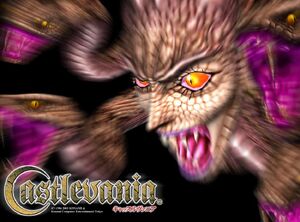 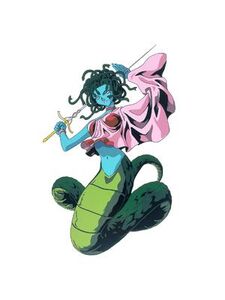 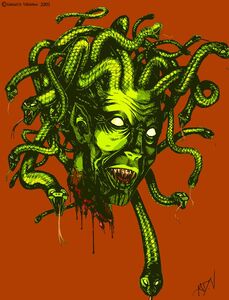