Kill anyone in her way.

Homicidal Monster
Medusa is a major antagonist in the 1981 film Clash of the Titans, and its 2010 remake of the same name.

She was portrayed by Natalia Vodianova in the 2010 film.

In the past, Medusa was a priest of Aphrodite and was a very beautiful woman. However, she was seduced by the god Poseidon and they made love in the goddess's temple, which angered her. She decided to punish Medusa by metamorphosing her into a Gorgon and banish her in a temple of the Underworld. Over time, many men came into her hideout but she killed all of them by petrifying them or by using her archery skills.

One day, the demigod Perseus comes in Medusa's hideout accompanied by two soldiers in order to behead her and use her head to petrify the Kraken. After their entry, she shoots one of the soldier in the back with an arrow, but Perseus and the other soldier split up and hide behind columns. Medusa spots the soldier and shoots an arrow on him, making him fall to the ground, and she petrifies him before he gets up. She also spots Perseus and tries to shoot arrows on him, but he manages to escape by using his shield as a mirror to see her. He then grabs a torch and throws it near a statue, causing Medusa to shoots it. Perseus decides to throw his shield in the arms of one of the statues and the Gorgon, seeing his reflection, shoots an arrow on it. Medusa then advances ahead, seeking the demigod. However, the latter suddenly springs from behind a column and manages to behead her with his sword. Her body and her head continue to move for a while even after being separated, and her corrosive blood starts to dissolve Perseus's shield, but he finally grabs the head and leaves.

During the following night, Calibos comes to Perseus's camp and stabs Medusa's head, making it bleed, and her blood creates three Giant Scorpions. Much later, Perseus uses the head to petrify the Kraken, then he throws it into the sea.

A long time ago, Medusa was a very beautiful woman. The god Poseidon made sexual advances towards her, but she rejected him and tried to take refuge in the temple of Athena. However, the goddess did not protect her and Poseidon raped her in the temple. To punish the affront, Athena metamorphosed her into a Gorgon and banished her in a ruined temple of the Underworld where other women are forbidden from entering. Over time, many men came into her hideout but she killed all of them by petrifying them or by using her archery skills.

One day, the demigod Perseus comes in Medusa's hideout along with Argos's soldiers Draco, Ixas, Eusebios and Solon, and the Djinn Sheikh Sulieman, in order to behead her and use her head to petrify the Kraken. After their entry, Medusa shoots arrows on them and manages to injure Draco and to make Solon fall into a pit of lava. Shortly after, she attacks Eusebios and Ixas and easily petrifies the latter by surprise before pouncing on the other one, petrifying him in turn. Medusa then tries to shoot arrows on Perseus and Sheikh Sulieman, but they flee and escape from her sight. A few moments later, she sees Perseus suddenly running and pursues him. However, Sheikh Sulieman ambushes her and manages to cut some of her snake hairs off.

Infuriated, Medusa wraps him in her tail and tries to petrify him, but it does not work due to his Djinn nature, much to her surprise. Then, Sheikh Sulieman blows up his body, which hurts her and disorients her for a while. After the explosion, Perseus recovers his sword and his shield but the Gorgon comes towards him, however Draco arrives and uses his knifes to crack a stalactite, making it fall over Medusa's tail. Severly wounded, she furiously petrifies him before destroying his stone body while Perseus uses his shield as a mirror to see her reflection and locate her position. He then closes his eyes, jumps on her and finally manages to behead her with his sword. Her body continues to move even after being separated from its head, but it falls on a pit of lava and burns to death.

Later, Perseus takes Medusa's head to Argos. However, Hades sends the Harpies to steal it. Perseus eventually manages to recover it and uses it to petrify the Kraken, then he drops it into the sea. 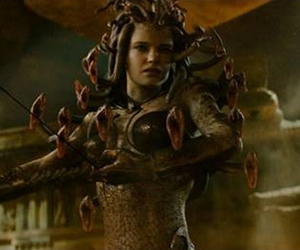 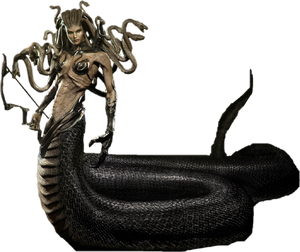 Add a photo to this gallery
Retrieved from "https://villains.fandom.com/wiki/Medusa_(Clash_of_the_Titans)?oldid=4161905"
Community content is available under CC-BY-SA unless otherwise noted.