Goddess of Darkness (after her fall)

Kill Pit and Palutena.
Destroy Hades for reviving her time and time again just so she would get killed (all failed).

She was Hades' most powerful minion until she turned on him and redeemed herself because the latter forced her to be his "puppet".

She was voiced by Naomi Shindō in the Japanese version, and by Cree Summer (who also voiced Blackarachina from Transformers: Animated) in the English version.

Medusa is shown to be Palutena's evil counterpart, being as cruel as her good counterpart is kind. She is also shown to have no respect for humanity, by committing actions such as drying their crops, plaguing them with monsters, and turning the people into stone.

Her feelings for Pit are quite clear as to the way she speaks towards him in Chapter 9: Medusa's Final Battle in Kid Icarus: Uprising. She shows no respect for the angel and wants to kill him after what he did to her all those years ago, as well as Palutena, who she also wants to destroy for cursing her to appear the way she appears because of her extremely evil and wicked nature towards humanity, such as plaguing monsters upon them, turning them into stone, and drying all their crops. Such an example of her deep hatred for Pit is when she states that she'll "strip him of his wings and sever him from the heavens forever".

Medusa has been shown to have multiple abilities in the Kid Icarus games. One such ability is Medusa's staple, the ability to turn people to stone. Though she has not exhibited this as of yet, it is stated she can in Kid Icarus intro. She is shown to be able to shoot beams from her eyes as a primary attack. It is unknown if these beams can freeze people in stone. She may also send a snake from her hair to attack Pit if she so wishes. When weakened enough, Medusa can detach her head from her own body, gaining an ugly demonic face with sharp fangs and a single orange eye, and chase Pit around. Medusa may also vary in size, from the size of a human adult to a size where Pit is as big as her eye. Medusa is shown to have very good control over the monsters of the Underworld.

Medusa's appearance has varied as much as Pit's over the years. In her first appearance, she was green with a single eye and snakes for hair. This look was drastically altered for Kid Icarus: Uprising. In this appearance, she has pale white skin, instead of green. She also has two red, snake-like eyes, carries a staff with a blue serpent wrapped around it, and wears regal purple and red robes with a gold trim. She retains her snake-hair.

Angel Land was originally ruled by the Goddess of Light, Palutena, and the Goddess of Darkness, Medusa. Palutena bestowed the human people with light to make them happy, but Medusa hated the humans, dried up their crops, and turned them to stone. Enraged by this, Palutena transformed Medusa into a monster and banished her to the Underworld. Out of revenge, Medusa conspired with the monsters of the Underworld to take over Palutena's residence, the Sky Temple. She launched a surprise attack and stole the 3 sacred treasures – the Mirror Shield, the Light Arrows, and the Wings of Pegasus – which deprived Palutena's army of its power. After her soldiers had been turned to stone by Medusa, Palutena was defeated in battle and imprisoned deep inside the Sky Temple. With the last of her last power, she sent a bow and arrow to the young angel Pit. He escapes from his prison in the Underworld and sets out to save Palutena and Angel Land. After finding the treasures, he is victorious in defeating Medusa.

All that is known is that Medusa is brought back to life by Hades in a process described as 'adding a pinch of memories to a ton of souls' and seeks to destroy mankind and have her revenge on the angel warrior Pit. After she is beaten once more, Hades finally reveals himself as the true antagonist. During Pit's final battle with Hades, Medusa is resurrected once again, but instead of fighting for Hades, she redeems herself by punching him before he can kill Pit, exposing his true form and tells Pit, Palutena, and Viridi that although Hades keeps reviving her, she will no longer play the puppet anymore. Hades says he will revive her as many times as he wants, but she had now outlived her usefulness. Hades then kills her permanently with an uppercut.

Medusa appears in Super Smash Bros. Ultimate as two attack-type primary spirits, her first based on her appearance from the original NES Kid Icarus, and her second based on her Uprising appearance. Her Spirit Battle is a Stamina Battle against a giant Palutena with super armor, plus gravity is heavier. At level 99, Medusa can be enhanced to her Uprising Spirit, which grants the player the ability to start the battle giant sized.

In the Captain N comics, Medusa plays a similar role to the games but her appearance is altered.

Medusa made an appearance in the Captain N cartoon series. 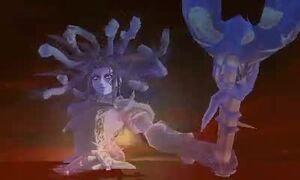 Medusa aka the Goddess of Darkness. 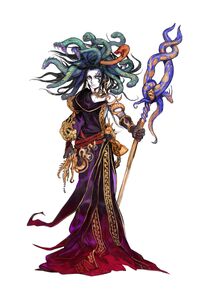 Medusa, the Goddess of Darkness.