Villains Wiki
Register
Don't have an account?
Sign In
Advertisement
in: Monsters, Villains by Proxy, Tragic,
and 24 more

Petrify people when they look at her

Tragic Monster
Medusa was a monster from Greek mythology that was one of the three sisters including Euryale and Stheno. These sisters comprised a race of monsters known as Gorgons and Medusa was the only one of them that could be killed, she was said to be able to turn people to stone with a glance: her hair was said to be made of snakes and she has become one of the most iconic Grecian monsters of all time.

Medusa was not always a monster however, she was originally a ravishingly beautiful maiden, "the jealous aspiration of many suitors," priestess in Athena's temple, but when she was caught being raped by the "Lord of the Sea" Poseidon in Athena's temple, the enraged war goddess Athena transformed Medusa's beautiful hair to serpents and made her face so terrible to behold that the mere sight of it would turn onlookers to stone.

When Medusa's was killed, according to mythology, by the hero Perseus - who cleverly used the metal of his shield as a mirror so as to see Medusa without making contact with her eyes: thus enabling him to combat the monster without being petrified.

According to legend Medusa's powers functioned even after her death as her decapitated head still had the power to turn a man to stone if not kept hidden from view inside a bag. 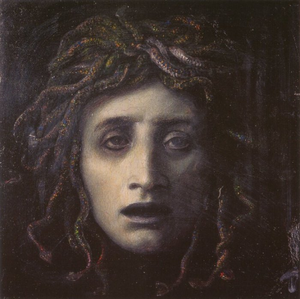 The head of Medusa.

Medusa in Once Upon a Time. 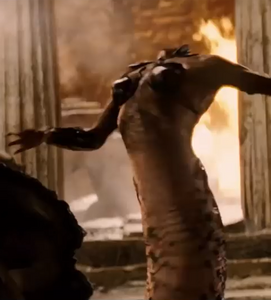 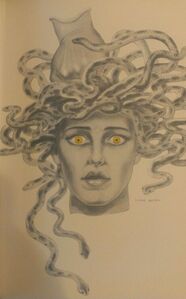