Megatron "Meg" Griffin is a major character in Family Guy. She is the oldest child and sole daughter of Peter Griffin and Lois Griffin. Despite being the most sympathetic and morally light of the Griffin Family, she can be pretty bad depending on the episode.

She was voiced by Rachael MacFarlane in the pilot pitch. In Season 1 (as well as few Season 2 episodes that were meant to be in the previous season), she was voiced by Lacey Chabert, who also voiced Vitani in The Lion King II: Simba's Pride. Since Season 2, she is currently voiced by Mila Kunis, who also played Rachel Newman in American Psycho 2 and Theodora in Oz the Great and Powerful.

Meg is considered to be the "black sheep" of the Griffin Family who is often bullied, abused, and ignored. Because of this, she developed many insecurities that prompted to try to fit in with the popular crowd to no avail. She also mostly serves as the butt of Peter's jokes that leaves her humiliated. That said, in the earlier seasons, she was nothing more than your typical bratty teenage daughter who got treated well despite her father's questionable decisions. She is also the main antagonist in the episode, Dial Meg For Murder.

However, things can get out of hand if Meg gets pushed too far; this was shown in the episode "Dial Meg for Murder", where she was sent to prison for being in love with a convict, only to return as a juvenile delinquent who abuses her family in revenge for their treatment. Even in the episode "Seahorse Seashell Party", where she angrily voiced her objection over her family's behavior towards her, only for the other family's members to turn their rage on each other as Meg stood up for herself. However, she later apologizes upon realizing that the family needs a "lightning rod" to absorb the dysfunction. In the episode "Road to Rupert", Meg assaults a man for insulting her after a fender-bender, which actually impressed Peter and his friends a lot.

Despite being the scapegoat, there were a few times when Meg get a little recognition for the good things that she has done. In the episode "Peter's Sister", she meets her aunt Karen Griffin, who has proven to be abusive to Peter. At first, Meg finds Karen to be hilarious, but realizes that her treatment towards Peter is what made him the abusive man he is known today. As such, Meg helped Peter defeat Karen in a fight, and Peter apologizes to Meg for his treatment towards her, admitting that he was stupid to take out his pain on her. Ever since then, Peter started to show a little care towards Meg, even defending her from bullies in the episode "The Peter Principal". In the episode "Amish Guy", she and an Amish boy named Ezekiel developed genuine feelings for each other, despite their fathers' feud against each other. In the episode "Valentine's Day in Quahog", she went on a date with a boy named Toby, who tried to take her kidney to donate, though he later returns it to Meg before giving her a kiss at the end of the day, much to her great delight. 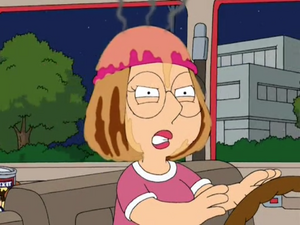 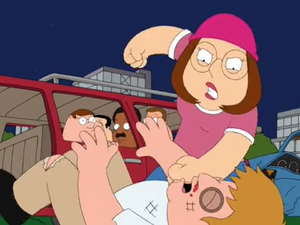 Meg beats the tar out of a man. 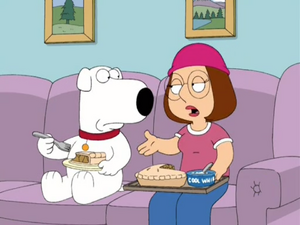 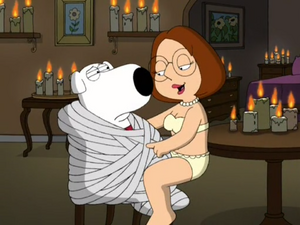 Meg prepares to rape Brian after kidnapping him. 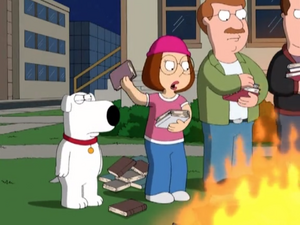 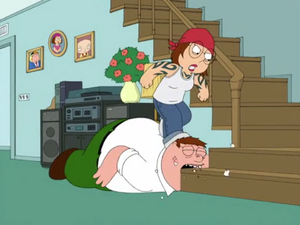 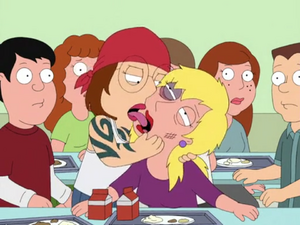 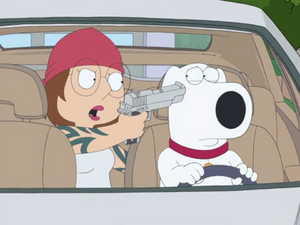 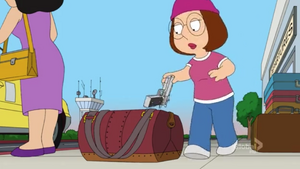 Meg plants a gun in Bonnie's bag to frame her and steal her husband. 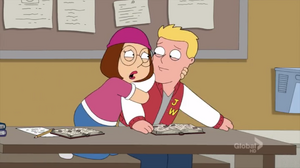 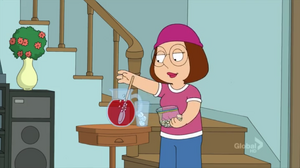 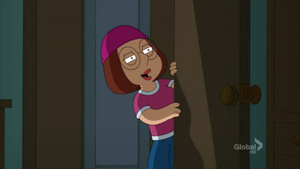 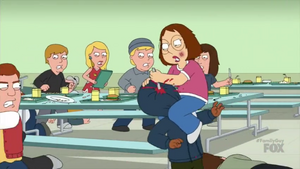 Meg stabs a guy in the face. 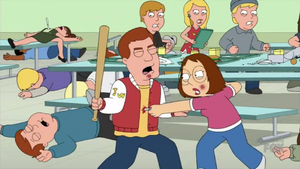 Meg stabs a guy in the chest. 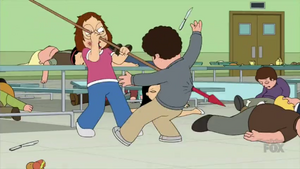 Meg impales a student to death. 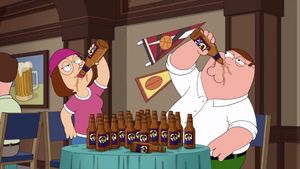 Meg underage drinking with Peter.
Add a photo to this gallery

Retrieved from "https://villains.fandom.com/wiki/Meg_Griffin?oldid=4069645"
Community content is available under CC-BY-SA unless otherwise noted.