To devour those who stray into her path.

Meg Mucklebones is a minor antagonist from the 1985 fantasy epic film Legend. She is encountered by the hero Jack (Tom Cruise) as he makes his way to the ancient tree-like temple in the marshes which leads to the underworld where the Lord of Darkness resides.

She is a semi-aquatic swamp monster resembling a giant green-skinned hag. She is grotesque in appearance with lank black hair, a pointed warty nose and a hunched back. Her long fingers end in sharp claws which she uses to snatch unwary travelers. She lurks beneath the surface and drags her prey down into the water where she feasts on her drowned victims.

Her voice sounds like she is gargling swamp water, with a horror villain-like cackle and almost playful tone.

But she also turns out to be rather vain and easy to trick as she is easily flattered by Jack, who uses her own reflection to distract her before chopping off her head. Her body continues to writhe for some time after her beheading.

Her allegiance to Darkness is unknown. She does not appear to be an agent of his, instead she is an opportunistic predator just out for herself. But the fact she resides so close to the Lord of Darkness' lair suggests there is a link. Possibly she, like other evil things, is drawn to the power of darkness, but other theories suggest she was originally a fair princess much like Lily and became a lover of the dark lord. Her prolonged exposure to him gradually warped her into a hideous hag, after which he no longer found her beautiful and banished her to the swamp. But this has not been confirmed.

She does not appear to possess any magical powers like a traditional witch, but does display some higher wisdom.

She appears to be based on the English legends of Jenny Greenteeth, a similar hag-like creature that is said to inhabit swamps and rivers and eats unwary children: like many hags she is shown to have a fondness for human flesh but apparently finds "fairy" flesh to be unappetizing. 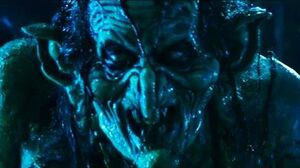