After Crash Bandicoot tricks Dr. Cortex into shrinking the Gems that stabilise his Planetary Minimizer device, the machines unrestrained energy zapped Cortex and his minions which merged them temporarily into the creature known as Mega-Mix. Mega-Mix is infuriated over the incident and tries to destroy Crash out of revenge. However, Crash manages to escape Cortex's space station just before it breaks apart, leaving villains stranded inside the wreckage. Mega-Mix can only be encountered once the player has gathered all the Crystals and Gems in the game.

Mega-Mix is a playable character in the games multiplayer mode. He is unlocked after the player has acquired Neo Cortex, N. Gin, Tiny Tiger and Dingodile as multiplayer characters.

Mega-Mix is a playable racer that can be unlocked during the Rustland Grand Prix event by earning Nitro Points. He is a Balanced class driver. 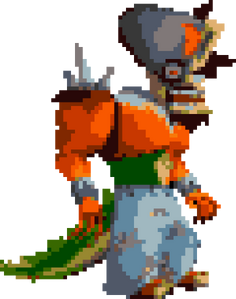 Mega-Mix in The Huge Adventure. 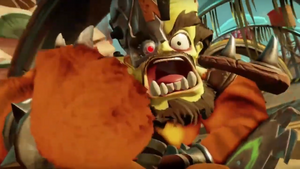 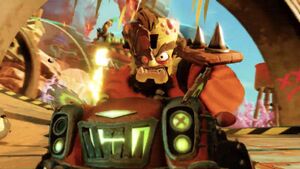 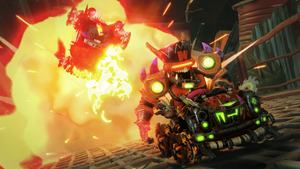 Retrieved from "https://villains.fandom.com/wiki/Mega-Mix?oldid=3655097"
Community content is available under CC-BY-SA unless otherwise noted.