Erase everything in the world (failed).

The MegaBug, also referred to as the MegaDragon and later MegaDragonBowser after merging with Bowser, is the main antagonist of the 2017 Nintendo/Ubisoft video game Mario + Rabbids: Kingdom Battle. It is an evil virus accidentally created by the Rabbids and now seeks to erase the Mario and Rabbids universe.

While little is specifically known about the MegaBug, it seems to be the very reason why everything bad is happening, and that whenever the heroes defeat a foe corrupted by its energy, the MegaBug comes closer to its main goal; destroy and consume everything in the world. When it possesses Bowser, Bowser Jr. shows honor and begs the heroes to save his dad.

Every time the heroes defeat a hostile Rabbid, the MegaBug grows slightly, as it absorbs its energy that corrupted the Rabbid in the first place. However, it is required to defeat hostile Rabbids as they endanger the Mushroom Kingdom. It is clear from this that the MegaBug engineered the situation for Mario and company to fail, apparently proving that despite being mute, it is a very clever creature that can engineer situations to its own advantage.

By the time, Mario and his friends recover Spawny from the Lava Pits, the MegaBug has attained enough energy from the Rabbids to manifest a physical form. It grabs Spawny, acquiring his merging ability, and creates a multitude of minions (including Bwario, Bwaluigi, and the Lava Queen) to stall its enemies' progress as it finds a powerful life-force to gain unlimited strength, in this case Bowser.

During its boss battle as MegaDragonBowser, it uses minions to battle on its behalf, but will occasionally launch an attack itself as well, even if it means harming its own minions. However, whenever it spins in it's shell, it becomes defenseless and vulnerable.

After getting defeated, the MegaBug separates from Bowser and makes one last ditch effort to kill the heroes once and for all, but Mario's team fire a series of blasts at the beast, destroying it for good and returning the Mushroom Kingdom back to normal.

As the MegaBug, it is a neon-bright and paper-thin creature with a shiny, long serpent-like body, very bright yellow eyes, a swirly tail, and two large wings that is bigger than the rest of its yellow, red, and orange colored body. Its wingtips are also pixelated.

When Bowser comes home from vacation early, the MegaBug does something to him that leaves him dazed. It then possesses his body to increase its own strength further, which results in the two merging into MegaDragonBowser.

This form retains most of Bowser's normal appearance, but it also applies features of the MegaBug. This includes orange patterns glowing on its body, extremely bright yellow eyes, long curly tail, and large wings that enables it flight. Overall, MegaDragonBowser resembles a demonic Phoenix/Dragon-like version of Bowser.

By itself, the only abilities the MegaBug is shown to have is flight and body possession. However, since it has absorbed much of its energy prior to its confrontation with the heroes, the MegaBug is assumed to be quite strong and powerful in its own right. It managed to daze Bowser long enough to possess him and even after the MegaBug was weakened from its battle as MegaDragonBowser, it was only bought down by a barrage of energy blasts fired by the heroes.

After fusing with Bowser, the MegaBug becomes even more powerful. It obtains (and possibly enchants) all of Bowser abilities, while also keeping its own ability to fly, making it a very dangerous foe. 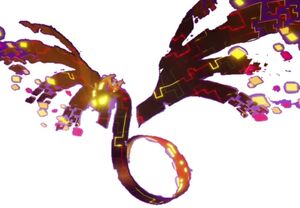 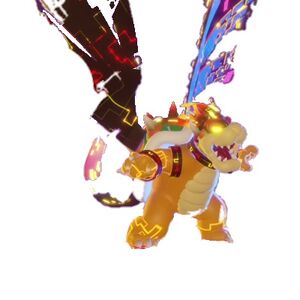 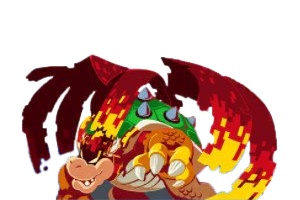