Queen of the Meganula

Hunt down and kill Godzilla and steal all of his energy and become more powerful.

Use that power to take over the world (both failed).

Megaguirus (メガギラス, Megagirasu) is the titular main antagonist of the 2000 film Godzilla vs. Megaguirus. She is the tyrannical queen of a race of giant prehistoric dragonflies called Meganulon from the Carboniferous Period that thrive by stealing the energy of larger creatures.

She was portrayed by the suit actor Minoru Watanabe.

Megaguirus began as a giant queen Meganulon, resting in the waters of the flooded Shibuya district of Tokyo while her swarm searched for energy. After the swarm siphoned some of Godzilla's power, they transferred it into a cocoon containing Megaguirus, dying in the process. Godzilla's energy mutated Megaguirus into a Meganulon-Godzilla hybrid, and she shed her shell and flew to the surface. Megaguirus flew through the skies above Shibuya, tearing skyscrapers apart with supersonic winds.

The next day, when Godzilla landed at Tokyo Bay, Megaguirus was waiting for him, intent on killing him and stealing the rest of his energy.

Megaguirus battled Godzilla viciously, using her incredible speed to confuse Godzilla and render him at her mercy. During the battle, Megaguirus repeatedly stung Godzilla while he charged his atomic beam and drained more of his power. She used this energy to launch a ball of pure atomic fire at Godzilla, knocking him to the ground.

As the battle raged on, Godzilla started to gain the upper hand when he pinned Megaguirus' stinger to the ground and body-slammed her. Eventually, Megaguirus flew at Godzilla, her stinger aimed at his head. Godzilla anticipated the attack and caught her stinger in his mouth, crushing it with his jaws. As Megaguirus reeled back in pain and attempted to flee, Godzilla blasted her with his atomic breath, setting her ablaze. Megaguirus crashed to the ground in a ball of fire and exploded, ending the threat of the Meganula for good.

Megaguirus makes an appearance in the IDW comic series Godzilla: Rulers of Earth. She first is seen battling Gorosaurus in a flashback to prehistoric times, and is also represented on a mural located on Infant Island showing all of the kaiju that are a part of Earth's natural order. In the present day, Megaguirus suddenly appeared in Sao Paulo during a battle between Godzilla, Ebirah, and a group of Meganulons. Megaguirus relentlessly attacked both kaiju, forcing Ebirah to retreat. Megaguirus then battled Godzilla until he became weakened and unable to fight back, then carried him to her nest in the wilderness, intending to feed him to her subjects. Godzilla used his nuclear pulse to incinerate the Meganulons and Meganula, and escaped from the nest. Megaguirus became enraged and carried Godzilla to the ruins of Machu Picchu, where their battle was interrupted by the arrival of a bizarre alien pod. A group of Trilopods emerged from the pod and attacked both Godzilla and Megaguirus. Megaguirus found herself overwhelmed by the alien creatures, which bit her and absorbed her DNA, then merged into a clone of her. Megaguirus attempted to escape, but Godzilla blasted her with his atomic breath as she flew away, knocking her out of the sky. Megaguirus fate was then left unknown.

Godzilla: Save the Earth

Megaguirus appears as a playable monster in the PlayStation 2 and Xbox versions of the 2004 game Godzilla: Save the Earth.

Megaguirus also appears as a playable monster in the PlayStation 2 and Wii versions of the game Godzilla: Unleashed, as a member of the Mutants faction of kaiju. She also appears in the Nintendo DS version of the game, Godzilla Unleashed: Double Smash, as a mini-boss on the Paris stage.

Megaguirus is greedy, arrogant, magisterial, power-hungry, and oppressive. She desires nothing more than to destroy her enemies and steal their energy so that she can completely dominate her environment. Megaguirus demonstrates a surprising amount of sentience in comparison to her emotionless and impassive Meganulon subjects, displaying sadistic pleasure, shock and pain during her battle with Godzilla. Megaguirus even briefly flashes an Evil Grin before dropping part of a building onto Godzilla.

Megaguirus is a relatively well-rounded combatant. She has enough physical strength to contend with Godzilla up close, but is also incredibly fast and agile. Megaguirus is capable of flight at Mach 4, and at full speed, she becomes practically invisible, making opponents unable to see or catch her. Megaguirus' flight produces powerful supersonic winds capable of destroying buildings, and also causes electrical disturbances. Megaguirus' stinger is sharp enough to penetrate Godzilla's armored hide, and can absorb energy from her victim. After Megaguirus absorbs energy, she can concentrate it into a large ball that she can launch from her wings at opponents. 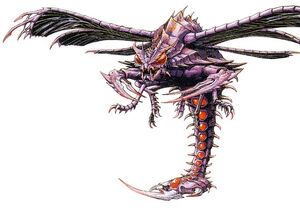 Megaguirus before being infused with Godzilla's energy. 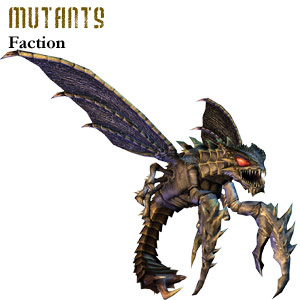 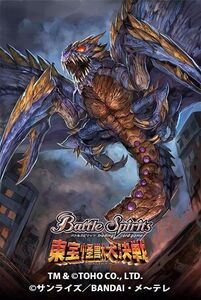 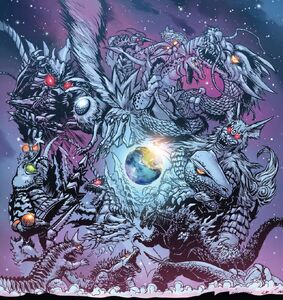