Megan Ferguson is the main antagonist from episode 8.11 of CSI:  NY, "Who's There?" She was played by Heather Sossamon, who later appeared in the 2015 film, Unfriended, as the evil Laura Barns.

Megan Ferguson is the only daughter of Elizabeth and Ron Ferguson, who were on the verge of divorcing. She had been taking the divorce hard and was harboring resentment towards Ron, mainly due to the fact that Ron was purposely burning through their finances so Elizabeth couldn't get to them. Megan was also the girlfriend of Mark Johnston, a relationship that both parents were unaware of, and it was never revealed how they met of how long they had been a couple.

With her parents' divorce on the horizon, Megan turned heel and masterminded a plot to rob them, colluding with Mark in her villainous plan. The scheme included Megan going to the theater which showed the classic film, The Rocky Horror Picture Show, using the theater to create an alibi for herself. She exited through the back of the theater with Mark, and as shown in the beginning of the episode, the evil Megan appared at the front door of her home with mark, donning ski masks and attacking Ron and Elizabeth upon entering. The villainess held her mother at gunpoint after tying her up, while Mark did the same with Ron. Their plan was to rob the couple's safe, but during the attempt, Ron escaped, prompting Mark to knock out Ron with a blow to the head before the robbers made their own escape.

As Mac Taylor informed to Jo Danville, Megan's alibi held up, but later on, a fragment of a Queen of Spades playing card at the scene led to one of the attackers. Following Mark's arrest, the card residue was revealed to be connected to the other attacker, as it was stepped on and taken all the way to the house. When it was revealed that the card was originally close to the theater, the group came to the conclusion that Megan was the second attacker. A flashback showed Megan under her heel persona holding Elizabeth at gunpoint, and after the reveal, Megan was interrogated by Don Flack; eventually confessing to the attempted robbery. Regarding a motive, Megan voiced her bitterness toward what Ron was doing to her family, but when it came to Ron's murder, she stated that neither she nor Mark killed him, nor would she ever do so because Ron was still her father. It was revealed that Elizabeth was actually Ron's killer, but even so, Megan ended up arrested for the attempted robbery. 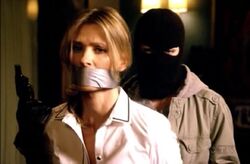 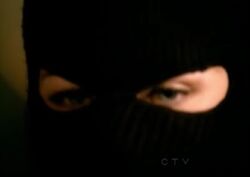 A close-up of Megan's heel persona
Add a photo to this gallery
Retrieved from "https://villains.fandom.com/wiki/Megan_Ferguson?oldid=4381012"
Community content is available under CC-BY-SA unless otherwise noted.