Rule Earth with an iron fist

Megatron was the first hybrid Transformer, being created by a powerful superspark forged in a new body that was constructed. It's said that his spark came to life in middle of a field full of newborn sparks. Megatron's original body was one of the many "knock off" Transformers constructed during the Silver Harvest. Eventually, the time travelling Rewind killed Megatron in order to prevent the destruction of the universe, but Whirl wanted to fix the timeline, and took a harvested spark and placed it into Megatron's body.

Megatron wanted to be a medic, but he lived in a time of functionism, and he was assigned the task of being a energon miner, and befriend a fellow miner named Impactor. A poet and idealist, Megatron wrote a treatise on how pacifist could change things from the social apartheid of Nominus Prime. When Impactor was part of a brawl against the upper class, Megaton didn't participate, but was arrested. Megatron's writings had grown in popularity, and caused many to detest the current regime, and so the Senate arranged for Megatron to be killed by police officer Whirl.

However, police captain Orion Pax discovered Megatron's innocence, and arranged for him to be released. Megatron became filled with hate, and became disillusioned with his ideology and realized the power of violence. Megatron threw his data pad that held his treatise, and created a symbol from the shattered glass. As a result of his writings, a "Decepticon" movement emerged, and the Senate elected to have him relocated off the planet due to knowing that killing him would make him a martyr. Megatron was reassigned to a mining facility on Messatine, and was aided by Terminus on continuing his writing and spreading the Decepticon movement.

Eventually, the Senate sent agents Froid and Trepan to alter Megatron's mind in order to cut his writings, and Megatron was left with a great fear of mnemosurgery. Megatron returned to his quarters to help a maimed Terminus when a mysterious surge within the mines forced an evacuation, but didn't him there. Megatron decided to save his data pad of his unpublished works instead of finding Terminus, something that would forever haunt him.

Megatron was relocated to an outpost, and continued to become embittered, and the boiling point came when Senator Decimus announced that the workers would be relocated. When one of the Senator's guards killed a worker, Megatron hurled his pickax at Decimus, and killed one of the guards. Chaos erupted among the fight, and Megatron easily pacified and rounded the other miners, and they were taken to imprisonment. However, Rumble and Frenzy broke free and started a riot, and Megatron joined in their efforts and they disappeared into the Kaon underground on the ship. He later joined a team of underworld gladiators, and became brutal and used excessive forces against his opponents. Despite having become trusted and taught by Clench, who led the operation of the gladiators, Megatron took control. Later on, Soundwave joined Megatron's cause after reading his mind, and saw that all he wanted was for all Cybertronians to be true equals.

When battling with the Senate, Megatron didn't believe that they were taking the Decepticons seriously, and Soundwave created a plan to lure the Senate to Kaon to murder them. Megatron and the Decepticons allowed themselves to be arrested by Sentinel Prime's men, and they worked with Soundwave and Starscream to kill Sentinel Prime and his men. Megatron took control of Kaon, and was ready to turn his insurgency to war against those who opposed him.

In the early 21st century, Megatron heard Starscream's infiltration unit had broken protocol on Earth, and headed to the planet to investigate. Examining the unit's abandoned bunker in Nebraska for information, he discovered that Starscream had stumbled across Ore-13 and was planning to use it to usurp Megatron's command. As seen in Stormbringer, while studying the bunker's files, he was contacted by Razorclaw and told that Bludgeon's investigations of Shockwave's files had led him to revive Thunderwing. Megatron ordered the Predacons to Cybertron, authorising them to do whatever was necessary to destroy Thunderwing, including the destruction of their homeworld. Just as he was handing down this order, Megatron was encountered by Verity Carlo, a human ally of the Autobots on Earth, but he ignored her. The bunker was then levelled by the unknowing Blitzwing and Skywarp. When their leader furiously emerged from the wreckage, Skywarp pleaded ignorance, but Megatron simply shot him out of the sky. Blitzwing opened fire rather than attempting explanations, so Megatron beat him, then set off for Starscream's new bunker in Oregon.

Orbital jumping to Oregon, Megatron called Starscream out and ordered the team to stand down, disgusted to see such power games being played amongst his troops. His speech was enough to take the fight out of all but Starscream, who, powered-up on Ore-13, took Megatron on himself. While the souped up Starscream was formidable, Megatron still amaged to beat him by blasting Starscream through his torso. Megatron ordered the Decepticons to ensure that Starscream survived, and then, observing the Autobots who had been watching the battle, announced that it was time to begin phase two.

While the Decepticons were occupied fighting the Reapers (a group of hostile aliens) the Autobots left Earth to deal with an even greater threat– a violent invasion orchestrated by the Dead Universe. Exploiting their enemies' absence, Megatron and his troops arrived to Earth, and when the Autobots arrived, they could not find them, as the Decepticons ingeniously escaped their clutches several times for months. Secretly abducting Hunter O'Nion, former Headmaster partner to the Autobot Sunstreaker, Megatron and his soldiers returned to Cybertron, where Megatron had Deluge conduct experiments that spawned a swarm of monstrous Insecticons. The experiments culminated in creating Bombshell, who Megatron employed in a series of key tasks in his plan.

The Insecticon obtained several Autobot codes and secrets from Hunter's mind, completed Shockwave's long-gestating combiner process, granting the Constructicons the ability to combine into Devastator, and created a working space bridge. The Decepticons later executed a battle strategy that led the Autobots to believe they fled Earth. The plan worked, and the Decepticons used this dupe to their advantage, as Devastator crushed the Autobot infantry beneath his feet and Megatron finally beat Optimus Prime– and tore the Matrix of Leadership from of his chest.

He then forced the Autobot forces to go through Bombshell's space bridge that led to the Insecticon-infested Cybertron; however, Prime was able to save his captured Autobots by destroying it although at a great cost, as it severely damaged him and he fell into a coma. With the Autobots being either missing, trapped on Cybertron, or dead, Megatron led his army of Decepticons– including his new weapon Devastator– to storm New York City, causing astronomical damage, killing hundreds of thousands of people, and quickly taking over the entire city. After only a day, Megatron stood with the whole American eastern seaboard at the point of his oversized fusion cannon.

As the Decepticons began to assault other countries around the globe, Megatron was questioned by Starscream on what the next step in his plan was. Megatron was recalcitrant and obstreperous, so he merely informed him that it was merely time to savor their victory, but Starscream accused him of not having any plans post-victory, and was merely allowing his men to run wild to distract them from any notion of taking power for themselves. What Starscream did not realize was that Megatron did indeed have a plan: to defeat the Autobots, he had created an army of killers and monsters, but in order to create his perfect rule, that army would have to be destroyed, the dissenting, objectionable, and distasteful elements obliterated before Megatron's peace could dawn. Megatron was not distracting his warriors, he was waiting to see which of them would question and turn on him.

Silently sorrowful to already know that such dissent would begin with Starscream, an otherwise-model Decepticon, Megatron withdrew to Israel for some silent reflection amid wholesale devastation. Megatron was hardly shocked to see the Insecticons sided with Starscream, but was surprised and almost overwhelmed when he discovered Devastator joined Starscream's ranks as well. Even still, Megatron remained victorious as he beat both traitors. Yet, Megatron and Starscream were forced to team up yet another time to defend the space bridge from the rebelling humans, and what came to their surprised was that the Autobots charged into battle as well.

After assuring Starscream that he would be leader in the future, when his time was done, Megatron confronted Optimus Prime, unsurprised that his old foe had survived, but did not expect him returning to Earth. Both leaders had always maintained a policy of acceptable losses through their million-year-long war, so Megatron assumed Prime had come back for selfish reasons– to reclaim the Matrix– but Prime insisted that he had changed, and would no longer allow their war to endanger innocents on this scale.

Megatron scoffed at the notion, revealing the "innocent" humans were planning to nuke New York, killing millions to get rid of the Decepticons, but Prime retorted that it wasn't just about the humans, but also about the difference between Autobots and Decepticons. The two came to blows, but Megatron triumphed in short order and commanded the Decepticons to depart, leaving the Autobots to be killed by the humans' nuke, but just as he was about to leave, he was blasted in the head by human soldier Spike Witwicky, wielding an energy blaster reverse-engineered from Cybertronian technology.

Injured and disoriented by the blast, Megatron was finished off when Prime smashed him in the face with his own fusion cannon. Starscream picked up his damaged leader and ordered the Decepticons to retreat, as he wanted to take leadership rather than have it fall into his hands. 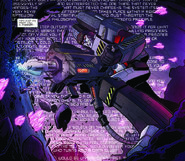 As seen in flashback in Births, Deaths and Interventions, Megatron composes a treatise while working as a miner. 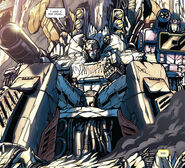 Megatron sits on a throne made out of Sentinel Prime's Apex Armour. 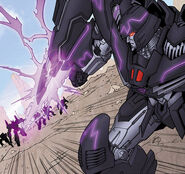 |Megatron takes on the Autobots with his rail gun.
Add a photo to this gallery

Retrieved from "https://villains.fandom.com/wiki/Megatron_(All_Hail_Megatron)?oldid=3481182"
Community content is available under CC-BY-SA unless otherwise noted.