Leader of the Decepticons

Megatron is the main antagonist of the 2007 cartoon Transformers: Animated. Being a delusional megalomaniac who truly believes the heroic Autobots are just tyrannical warmongers, Megatron formed the Decepticon ranks and used both his brute strength and genius level intelligence to put his plans of destroying the Autobots into action.

As revealed in "Transform and Roll Out", Megatron had spent 4 million stellar cycles (years) in search of the Allspark. Even though he found it, Megatron was betrayed at the beginning of the series by Starscream, who planted an explosive device on his back. Due to the explosion that crippled the Autobots craft, Megatron's lifeless body crashed on Earth, contracting "space barnacles," while his disembodied head was found in rural Michigan by a young Isaac Sumdac. Megatron's head subsequently became a keystone for Sumdac's various robotic creations, which he used to help convert Detroit into a technological metropolis within the next 50 years.

His head was not reactivated until "Home is Where the Spark Is", when Sari used her Allspark Key to open her father's door to his lab. The surge of the key's power reached Megatron's head, putting him back online. Upon reactivation, he immediately found out that it was Starscream who betrayed him, and immediately plotted payback, but needed a body to do so. When he found out that the Autobots were on Earth, he took control of one of Sumdac's prototype pocket bots and sent it to their hideout — an abandoned automotive plant. Using the pocket bot, Megatron hacked the plant's automated systems to try and kill the Autobots, but his plan failed, and he would have been discovered by the Autobots if it weren't for Bulkhead accidentally destroying the pocket bot.

In "Blast from the Past", he revealed his existence to Professor Sumdac while he was repairing Sari's tutor-bot and the future Dinobots, which were accidentally destroyed by Bulkhead. Even though Sumdac wanted to tell the Autobots, Megatron convinced him that he was an Autobot and didn't want the real Autobots to see him in his weakened state. Eventually, Sumdac repaired the Dinobots with Megatron's "help". The Dinobots went on a rampage, got their new Cybertronian-like forms, and Megatron got his second taste of what Sari's key could do. He then proceeded to tell the Dinobots that the Earth cars were malevolent fossil feeders and the Autobots were even worse, sending them on another rampage.

In "Nanosec", he told Sumdac to hurry up with building a body and that he required Destronium (a play on the words cybertonium, the stuff all Cybertronians are made of and require in G1, and Destron, the Japanese name for the Decepticons), but the only Destronium available was across town, and if it wasn't delivered in under 10 minutes, then it would be futile. Upon hearing this, and seeing a test run with a super-speed suit developed by Sumdac Systems, Megatron secretly bailed petty thief Nino Sexton out of jail and supplied him with the super-speed suit, paying him to deliver the Destronium to him. Both Megatron and Sexton (now calling himself Nanosec), however, were unaware that if Destronium were moved at high speeds, it would become unstable, volatile, and catastrophically explosive. At the same time, Nanosec was unaware that the side effect of the suit's speed-enhancing ability was the wearer's rapid aging. Within minutes of continuously using the suit, Nanosec aged into an elderly man and was shortly apprehended while Bumblebee, using his rocket boosters and aided by Bulkhead and Prowl, disposed of the Destronium just outside Earth's atmosphere before it could explode and potentially take most of Detroit with it.

During "Sound and Fury", Megatron created Soundwave, originally a musical toy he created for Sari's birthday — even though his actual reason for creating Soundwave was to create a new body when Sari used her key to upgrade it. However, Sari used her key too many times and gave Soundwave a spark, and after hearing about this, Megatron recruited him to destroy the humans, all other organics, and the Autobots, whom Megatron said were "traitors who live to serve the humans."

In "Nature Calls", space barnacles wreaked havoc in a mining area outside Detroit, assimilating with a construction vehicle and becoming a techno-organic monster. The monster was defeated by Bumblebee, Prowl and Sari using hot water sprayed from a fire hose in the mine. It was revealed that the space barnacles had latched on Megatron's body, which crashed in the vicinity 50 years ago. Shortly after the space barnacles were destroyed, Sumdac found Megatron's body lying by the river and brought it back to his lab.

During the "Megatron Rising" saga, Megatron got impatient with Sumdac since he hadn't had much progress in repairing his body. Then he tried to communicate with Lugnut again, even though he and Blitzwing were with Starscream, who also thought that Lugnut had gone insane. After having his signal detected, Megatron received an unexpected visit from Starscream, who, even though he had the upper hand, didn't do anything except talk to Megatron. Then when Bumblebee burst in, Megatron used the lab's robotics to throw Starscream and Bumblebee outside and convinced Sumdac that he should complete his body to "help" his so-called "Autobot brothers". Lugnut and Blitzwing then flew in, and Blitzwing found out that Lugnut wasn't insane, then placed Sari's key (which they stole from Ratchet into Megatron's head, resulting in him being resurrected into his new Earth mode. Upon his reawakening, Megatron defeated the other Autobots, "killed" Starscream and led Lugnut and Blitzwing to Dinobot Island to retrieve the Allspark. When they arrived, Megatron immediately battled Optimus and both combatants ended up inside the Autobots' ship, rekindling their past struggles. When Megatron got hold of the Allspark, he placed it in his own spark chamber, giving him more power. Even though he had the upper hand, Sumdac attempted to take him down by disrupting his equilibrium circuits, which distracted Megatron long enough for Optimus to disperse the Allspark and seriously damage Megatron. But while Megatron failed in his quest to acquire the Allspark, he succeeded in kidnapping Sumdac and downloading an incomplete design spec for a space bridge.

In "The Elite Guard", Megatron put in motion his plans to create a Space Bridge, so that his forces could transwarp to Cybertron and conquer the planet from within. During construction, Megatron found an Allspark fragment in one of Sumdac's worker robots. In "Mission Accomplished", the Allspark fragment-revived Starscream repeatedly tried to destroy Megatron, only to be repelled each time. Using a tachyon transmitter stolen from the Elite Guard's ship, Megatron sent a message to his fellow Decepticons, letting them know of his return. In "A Fistful of Energon", upon hearing of Starscream's escape from the Autobot Elite Guard, Megatron put out a bounty on the fugitive Decepticon. In "Rise of The Constructicons", Megatron recruited Scrapper and Mixmaster to build the Space bridge, coercing them with a supply of oil.

During the "A Bridge Too Close" two-part special, Megatron officially initiated the Constructicons into the Decepticon ranks. When he realized that his Space Bridge was still not in spec, he received word from Shockwave that Cybertron's best foremost Space Bridge expert was none other than Bulkhead, whom he kidnapped and threatened with a Headmaster unit]. In part 2, he battled Starscream, his clones and the Autobots at the same time, telling the Autobots about his plan to conquer Cybertron while the Autobots are at their weakest. Unfortunately, the Allspark fragment he got from the beginning of season 2 wasn't enough to power the Decepticon Space Bridge, so he used the fragment in Starscream's head for more power, but he overloaded the power core and sent himself, Starscream's head, a revived Omega Supreme, and the Space Bridge equipment through, ending up drifting in space with Starscream's head; the two arguing amongst themselves.

However, during "Transwarped", Starscream freed Megatron from his stasis cuffs by shooting a sonic laser from his mouth. An offline Omega Supreme suddenly appeared and Megatron took control of him by using Starscream's head. He attacked the Autobots after transwarping back to Earth to prevent them from exposing Shockwave's cover. After Prowl severed his control of Omega, Megatron battled and easily defeated Optimus. He was then trapped by Starscream and they, along with Omega, wound up transwarping randomly across the universe, courtesy of the plasma dynamic thruster Bumblebee placed on Omega.

By the time they managed to get the thruster off Omega in "Decepticon Air", they found themselves in the middle of space with Lugnut drifting towards them. After picking up Shockwave once he had acquired Arcee, Megatron transwarped Omega to Earth's moon to begin his master plan: the construction of Omega Supreme clones, setting in motion the events of the two-part "Endgame".

With Lugnut in possession of the activation codes, Megatron entered one of the clones to personally oversee the destruction of Earth's Autobots before focusing on Cybertron. However, Optimus Prime, wielding the Magnus Hammer, managed to disable the clone Megatron rode in, forcing the Decepticon leader to enter the battle himself. During the course of the conflict, the clones were revealed to have been rigged by Starscream to explode, with Megatron and Detroit ending up caught in the explosion. It was only through Prowl and Jazz's "Processor Over Matter" recovery of the Allspark and Prowl's sacrifice that the explosion caused by the final clone was contained, saving Detroit from total destruction. Surviving in spite of heavy damage to his body, Megatron made a vain attempt to destroy Optimus, only to be knocked to the ground by a swing from the Magnus Hammer. Megatron told Optimus to finish him, but was spared (he only smashed his fusion cannon), so that he would face punishment for his war crimes on Cybertron. 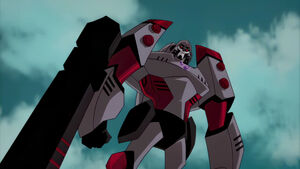 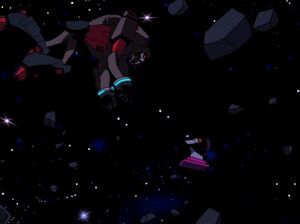 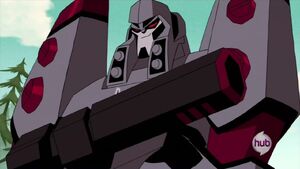 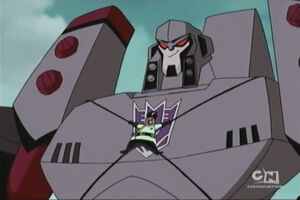 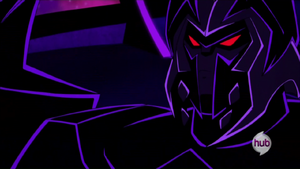