Gather all of the pages of the Book of Ancients and obtain ultimate power.

Remake the world into a paradise for themselves.

Summoners
The Megiddo, often romanized as Megid, is an order of monsters created by the Alter Ride Books and the main antagonists of Kamen Rider Saber. They are summoned by Storious, Legieiel, and Zooous, all of whom seek to steal the Book of Ancients from the Sword of Logos so they can use it to remake the world in their image.

The Megid were once three of five followers of a priestess whom linked the human and Wonder Worlds, allowing them to pass over. However, the Megid leader Storious, who had been secretly evil corrupted both Legeiel and Zooous into tasting the power of the Great Book, and split off to form the Megid to obtain the Great Book and use its power to remake the world in their image, or rather both latter Megids were unwittingly does a dirty work for Storious' own ends.

In the present day, Calibur announced to his acolytes in the Megiddo that the time for them to make a new world emerge had come. He handed the Gansekiou Golem Alter Ride Book to Legeiel and sent him to create the Golem Megiddo to attack the city. Legeiel headed to a city and summoned the Golem Megiddo out of the Alter Ride Book. With its powers, Legeiel had it trap a portion of the city in the book it summoned. However, they quickly faced an obstacle in the form of the new Kamen Rider Saber. After a battle between the Megiddo and the Rider, the Golem Megiddo was destroyed by Saber.

With the assistance of Calibur, the Megid then put their plan into motion to simultaneously erase six locations and replace them with giant books that will connect our world to the Wonder World, similar to the incident that happened 15 years ago. Though the Megid were met by the Kamen Riders of the Sword of Logos, Calibur was able to successfully open the Tome of Ancients and make it inside to claim the Table of Contents, though he was pursued by Saber.

After being beaten by Saber, Calibur considered joining with the Rider upon seeing his hope and optimism, but was killed by Desast before he could make his decision or reveal much else of what he knew.

Though their plan to claim the Table of Contents didn't pan out, the Megid did make it easier to create Megid as a result of linking the worlds, causing certain humans to be able to see the Wonder World. The Megid then began to target these humans to create Megid from them and use their essence to fill books, but they were opposed by Touma and the Sword of Logos Riders.

Legeiel later had Storious upgrade him into his forbidden form, seeking to face Saber in a final battle to avenge his previous defeats. Though fighting hard, Legeiel was ultimately defeated when Touma unlocked the power of Elemental Dragon and destroyed him, leading Storious to proclaim his role in the story was now over. 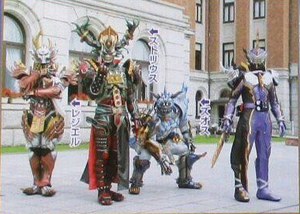 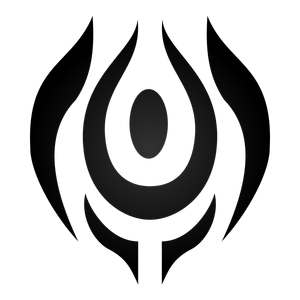 The logo of the Animal Megid. 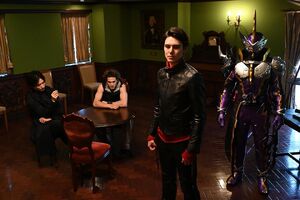 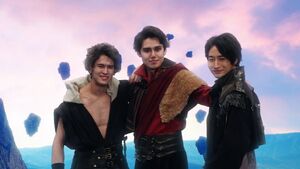 The humans who would become the Megid.