Giant Monster
Megidramon is an evil Dragon Digimon and WarGrowlmon's Dark-Digivolution. He was accidentally created by Takato's rage and fury.

He was voiced by Steve Blum in the English dubbed version.

Megidramon is a Mega Digimon that looks like a giant winged dragon/serpent hybrid, and razor-sharp claws and teeth. He also has armor on his shoulders, and on his chest. He has blood-red eyes.

Megidramon, born from Takato’s rage, is none other than a vicious, bloodthirsty, carnivorous dragon, even if it meant trying to devour Beelzemon.

Megidramon can wrap his enemies with his mighty tail. He can also produce acidic saliva and fire red lasers from the hazard symbol on his chest that can cause earthquakes.

Megidramon is Guilmon's dark Mega form born from Takato's rage after Beelzemon murdered Leomon. Takato's anger vanished, horrified of what he had done. The other Tamers were also horrified at what had happened.

Megidramon comes fave-to-face with Beelzemon, and attacks him by seizing the demon with his tail and tries to eat Beelzemon. However, Beelzemon seized Megidramon by his teeth and jaws and got drooled on. Megidramon then unleahes an earthquake with his hazard symbol on his chest. Makuramon suddenly arrives on the scene and insults Beelzemon, thinking he was pathetic, as well as a pawn that doesn't understand. Infuriated, Beelzemon seizes Makuramon by the face, and kills the monkey Deva, absorbing his data. Taomon and Rapidmon tried to stop Megidramon, only to be stopped by Makuramon’s Primal Orb attack (that Beelzemon absorbed earlier). Henry and Rika managed to quickly free their Digimon partners, allowing Beelzemon to steal their Ultimate power.

Beelzemon, having absorbed enough power, manages to regain his strength and push Megidramon back. After he fights back by smacking him in the face numerous times, Beelzemon eventually defeats Megidramon with a mighty kick, breaking his armored chest and knocking him out unconscious. Takato cried, knelt down by the unconscious Megidramon and wished that he and Guilmon could start over. But as soon as Takato realized that he couldn't give up the old Guilmon, Megidramon quickly changed back into Guilmon. Takato then wished that he and Guilmon could fight Beelzemon together as it should be. This resulted in him Biomerging with Guilmon to become Gallantmon. After the battle, Takato then received a new D-Arc, an Ultimate (Golden) D-Arc. Takato was the only one in the season to get a Golden D-Arc. 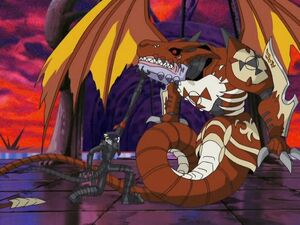 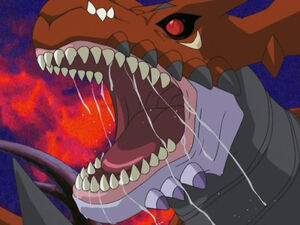 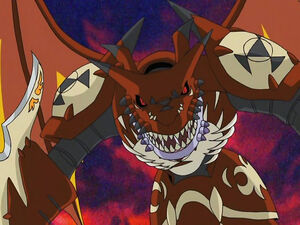