Megoliaths are large mammoth-like Creatures of Grimm from the American animated webseries RWBY.

Like all Grimm, Megoliaths were created by the God of Darkness to offset his brother's creations. Later, the Grimm fell under the control of Salem after her corruption.

After Arthur Watts shuts down the heating and security systems in Mantle, mass panic ensues, attracting Grimm, including Megoliaths. As the Huntsmen and Huntresses try and get the residents to safety, a herd of Megoliaths breaks through the wall and charges. Elm Ederne is able to slow them with her rocket launcher, but the herd makes its way through the city.

Ruby Rose and Harriet Bree try to get more civilians to an extraction point, but are blocked by a massive alpha. Penny Polendina attempts to bring it down, but is knocked away. The alpha steps on Harriet, depleting her Aura, but Ruby and Penny step in with a plan. Penny uses her lasers to weaken one of the Megoliath's tusks, and then Ruby cuts it off and makes it fall on top of it, impaling the Grimm and killing it. They are able to get the citizens to safety, but the battle rages on.

Megoliaths rely on their massive size, strength, and durability to crush buildings and people, and are capable of killing smaller Grimm or depleting Aura by simply stepping on them. Their thick plating and skin make them resistant to many blades and ammunition, and their massive size allows them to trample and crush enemies. Despite their size, they are considerably fast, able to charge quickly at enemies to trample them or impale them with their massive tusks.

Megoliaths appear as units in RWBY: Amity Arena. They are large units that charge structures, pushing all other units out of their way and dealing damage as they do so. 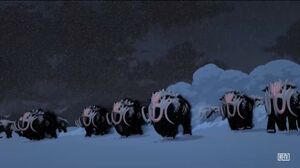 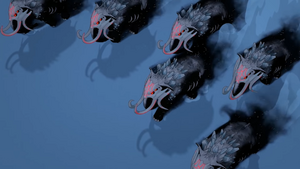 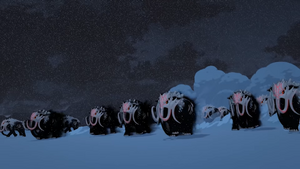 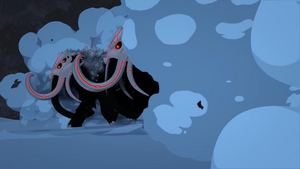 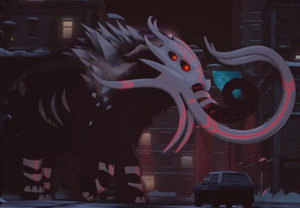