Continuing her relationship with Yuzu.

Mei Aihara is one of the two main protagonists of the controversial manga Citrus and its 2018 anime adaptation.

On the surface, Mei presents herself as a stern and cold figure of authority who is seemingly always in control over a situation. Mei is described as a studious, beautiful, and intelligent individual, having become the Student Council President within a short time frame. On the inside, however, she is an emotional wreck.

She was originally a well-adjusted girl who was close to her father, but this changed when he abruptly left his position at the academy. From there, Mei began to burden herself, laboring away with any academic work that her father left so that if he eventually returned, she would be relieved of duty. During times where she would become severely emotionally distressed, Mei would subconsciously resort to trying to make sexual advances on others as a coping mechanism when she feels that she was losing control over a situation.

As such, this is often the case with her relationship with Yuzu. She would initially indulge in kissing or molesting her as a means of finding solace for her personal issues, and was not above manipulating her emotions for her benefits. However, this would also prove her undoing as she often neglects to view her stepsister as family rather than just a crutch.

As she gradually began to form a relationship with Yuzu, she would still use some of her old tactics on her, but during those times, it is made abundantly clear that Mei is clueless as to how love and relationships really work.

While she may not completely understand Yuzu's optimism due to her having a pessimistic view of the world, it is clear that Mei truly cares for her stepsister, beginning to view her as a lover rather than just an emotional crutch.

Mei can also be a little possessive of Yuzu in some cases. When she met Matsuri, a childhood friend of Yuzu's, she subtly becomes jealous of her, which leads to her trying to make advances on Yuzu to assert ownership over her. Despite Matsuri blackmailing her by threatening to show Yuzu the picture of Mei kissing her, the two find a common ground: they were both cold individuals who despite trying to push others away, were truly looking for love, but it took a meddling person to make them realize that.

Mei is a 16-year-old student at the Aihara Academy, an all-girls school as well as the Student Council President. Upon Yuzu arriving to the school due to her mother remarrying, she immediately came into conflict with Yuzu over her violating the dress code established by the school. When she ordered Yuzu to hand over her cell phone, Mei proceeds to physically grope the phone out of her hands.

Eventually, it is revealed that because of her mother remarrying, Mei was now her stepsister by law. While initially shocked by the news, Yuzu initially tries to make a good first impression, but she only receives silence from Mei. As a way of getting her to talk, Yuzu brings up the kiss that Mei had with the homeroom teacher (who was also her fiancée), claiming that it must've felt alluring since there was the likelihood that she could get caught for it. In response, Mei walks over to Yuzu and pushes her to the ground, forcefully holding her down as she kissed her. After finishing, Mei informs her that was what a kiss was like.

Throughout her time living with Yuzu and her mother, Mei has engaged in actions that could easily be construed as predatory and cruel in nature. For instance, there is one moment where she forcefully kisses Yuzu whilst bathing with her, and explaining it off as Yuzu wanting her to touch her. Mei had also had the habit of manipulating Yuzu's emotions for a duration of the time that she lived with her, often resorting to using forceful kisses to shut Yuzu up. It is later revealed that the reason behind her behavior is because she had personal issues that manifested sometime after her father left. Her father was originally a strict man who she aspired to be like.

However, one day, he felt unhappy with his life, and he left the school. It is also explained later on in the manga that Mei had tried to shut her heart out from accepting love because she could get hurt easily. Despite that, she had attempted to find love in her own way through botched research, and other misunderstandings.

With Yuzu, Mei had essentially tried to use her as an emotional crutch for her personal problems, but whenever she became emotionally distressed, she attempts to force herself onto Yuzu for solace. In one instance of this, when Mei realized that her father was not intending on returning to the school, she attempts to have her way with Yuzu, exploiting the fact that Yuzu would truly want that. However, Yuzu instead slaps her, informing her that she was family and not some toy she could confide in.

As such, Mei had gradually improved as a character. After Yuzu helped her to make good terms with her father, Mei engages in a kiss, this time out of her own volition, thus marking the moment that she truly began to fall in love with her stepsister. 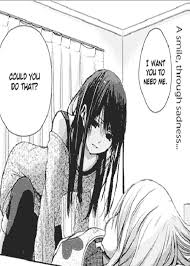 Why It Didn't Work - Citrus

Is Citrus the Anime Glorifying Assault?
Add a photo to this gallery

Retrieved from "https://villains.fandom.com/wiki/Mei_Aihara?oldid=3550579"
Community content is available under CC-BY-SA unless otherwise noted.