When a mysterious being was controling Kari, it took the DigiDestined back in time to show how the DigiDestined came to the Digital World. One of the Dark Masters; Piedmon, attacked with a small army of Mekanorimon and Guardromon. Gennai (when he was younger) hi-jacked one of the Mekanorimon and escaped with the Digi-Eggs, (with the exception for Gatomon's Digi-Egg).

Machinedramon also has an army of Mekanorimon (the Mekanorimon that served Piedmon were most likely part of this army). One of them were attacking Tai. Izzy, Agumon, and Tentomon, with a Tankmon. They both tried to fire at the DigiDestined but the missed and shot each other. The remain Mekanorimon's location are unknown.

About three or four Mekanorimons worked for the Digimon Emperor presumably due to the influence Dark Ring or Spiral. Three were lost in the Dark Whirlpool. The Digimon Emperor rode one out and encountered the remains of Devimon. Their current locations are unknown. 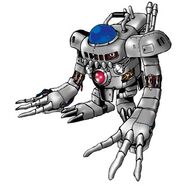 Retrieved from "https://villains.fandom.com/wiki/Mekanorimon?oldid=3119469"
Community content is available under CC-BY-SA unless otherwise noted.