Villains Wiki
Register
Don't have an account?
Sign In
Advertisement
in: Doctors and Scientists, Affably Evil, Thief,
and 21 more

Creator of the flexible display technology

Steal the plans for the flexible display technology back from Alistair Krei (failed).

Dr. Melvin "Mel" Meyer is a minor antagonist in Big Hero 6: The Series. He is an eccentric scientist who resorts to stealing the plans for his flexible display technology back after learning Alistair Krei's intentions for it.

He was voiced by John Ross Bowie.

In "Aunt Cass Goes Out", Mel sneaks into Alistair Krei's office following his presentation of his new Buddy Guard robots, which utilize the flexible display technology he invented to change their appearance. He confronts Krei over using his technology to hurt people rather than help people like he said he would, but Krei dismisses this and insists that the Buddy Guard is designed to protect. Krei shows Mel to the door and offers to get muffins with him sometime, but Mel realizes quickly that he is just trying to get rid of him and demands to have his plans back. Krei, however, locks the plans away using his key card and has his Buddy Guards kick Mel out—adding further insult to injury by covering him with a sheet of the flexible display technology, thus making him appear invisible.

Later, while Krei is on a date with Hiro's Aunt Cass, Mel sneaks into the restaurant they are in via the display technology. He then ambushes Krei in the restroom and tells him that he needs his key card. As he is exiting the restroom, Mel wraps his face in the display technology and takes Krei's appearance. He tries to leave the restaurant following this but is forced to take Cass along with him. Hiro, who had been following Krei and Cass with Baymax, notices Krei's strange behavior and Baymax states that, while his appearance is the same, Krei's DNA has changed. Hiro then realizes that the Krei with Aunt Cass is an impostor and finds the real Krei tied up, and he states that Mel stole both his key card and his "buy nine sandwiches get the tenth sandwich free" card.

Hiro chases after Cass and Mel on his scooter with Krei, also warning GoGo and his other friends about the impostor. In the limo, Mel unnerves Cass by showing his obsession with surprise parties. When the limo arrives at Krei Tech, Mel enters the building and nervously tries to talk to the security guard, only to accidentally intimidate him and get in rather easily. He then uses the key card to get his plans back but is confronted by Krei and Big Hero 6. Mel gives the plans back reluctantly but tells the heroes that Krei has bad plans for his invention. Big Hero 6, however, is already aware of this as they tell Krei that the Buddy Guards' threat assessment program will go haywire if they get wet and that he cannot sell them to the public. Annoyed, Krei says that he'll hold off selling the Buddy Guards until they are fixed, much to Mel's amusement, but not before dispatching several Buddy Guards to dispose of him.

While cowering behind Fred, Mel accidentally sets off his fire breath, causing the sprinkler system to activate and the Buddy Guards to go haywire. Mel runs away and enters the limo, demanding that Cass drive away from the Buddy Guards (who, thanks to Wasabi, now resemble Krei's head). As they are driving, Mel explains everything to Cass, who, annoyed, states in response "and this is why I don't date." In spite of the situation, Mel tries to make conversation with Cass, who is totally uninterested in him. Upon driving into a forest, Cass thinks that they have lost the Buddy Guards, only for the last one to smash into the windshield, forcing them out of the limo.

They are then cornered by the robot, and, believing this to be their last moment, Mel properly introduces himself, although Cass doesn't care. Before the Buffy Guard can shoot, Hiro and Baymax destroy it, and Mel is apprehended by the police afterwards, with Krei planning on charging him. Cass reveals to Krei that Mel had told her about how he had been using him, although this does not change Krei's mind as he still decides to press charges. Mel attempts to escape by using his display cloak to turn himself invisible, but this fails as Cass points out that his feet are still visible. While he is being taken away, Mel asks Cass if she'll call him in prison, which she refuses. He asks if he can write to her next, which, dismissively, she allows, exiting him. 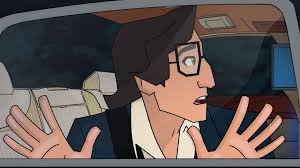