Melancholia St. Clair is a Necromancer and one of the two titular main antagonists (alongside Lord Vile) of Death Bringer, the sixth book in the Skulduggery Pleasant series. She returns as a supporting character in The Dying of the Light.

Melancholia first appeared during Mortal Coil as one of the necromancer diciples and hated Valkyrie for her being the possible Death Bringer.

Melancholia returns in Death Bringer where Cleric Craven decides to trap her in her surge so that she can be the Death Bringer, Melancholia appears and soon becomes incredibly powerful. Melancholia attacks Valkyrie for fun and later takes part in the Necromancer vs. Sanctuary battle.

It is believed that the Sanctuary wins and that Melancholia was killed but she reveals that it was her reflection who was killed and she proceeds to battle against Skulduggery and Valkyrie defeating them.

Skulduggery reveals to her that he is Lord Vile and dons his armour, transforming into Lord Vile and attacks her easily defeating her, she and Valkyrie proceed to escape from Lord Vile, who chases them and attacks them causing Melancholia to fall into a coma while Darquesse fights Lord Vile.

After Skulduggery and Valkyrie return to normal, they take Melancholia to a ward. She is kept in the coma to prevent her power from exploding.

She makes her return in The Dying of The Light when she is taken out of her coma to help fight Darquesse due to her level of power. She is then seen amongst all the allies in the book. Melancholia then assistance Lord Vile in battling Darquesse to allow Valkyrie time to gain the power of a signal which would make her strong enough to kill Darquesse. Whilst the two are strong enough (as Darquesse is not at full strength and Lord Vile was super-charged) but when they are distracted, Darquesse gives out a ball of energy which destroys most of Roarhaven, killing both Lord Vile and Melacholia in the process.

Melancholia was shown to be extremely condescending and pretentious, an attribute Valkyrie assigned to most Necromancers. Her surname and manner may have indicated a snobbish upbringing. She despised Valkyrie from the very moment she joined the Order, extremely jealous of how much attention she received despite the fact that she had been studying Necromancy for much longer than her. Valkyrie could never resist the opportunity to make fun of her because of this, finding her hatred astonishingly amusing. She was also shown to be somewhat of a religious fanatic, dedicating large amounts of time to studying Necromancy. She had a lot of respect for her elders in the Temple before her Surge, doing as she was told solemnly and without question.

After her Surge, she seemed to have realised her great strength, and became quite self-righteous, complimenting herself and referring to herself as a "god." She appeared to become mentally unstable in her periods of strength. Melancholia was also shown as very callous in her peaks of power, not caring about the people she killed for strength. She was also incredibly deluded and arrogant; in a conversation with Valkyrie, she claimed that she had moved beyond what living people thought of as important and that both life and death meant nothing. However, Valkyrie considered Melancholia's claim that lives were meaningless hypocritical, due to the fact that when she said it, she was running from Lord Vile, showing that she feared death, though she defended this by claiming she just didn't want the inconvenience of it.

In her periods of weakness, Valkyrie befriended her. Melancholia denied the friendship until the very end, claiming she hated Valkyrie and that she wanted to kill her. However, in the caves under Gordon's Mansion, she seems concerned with Valkyrie's well-being after fights, and repeatedly asks Valkyrie for help.

Melancholia was a Necromancer and was thought to be the Death Bringer. During her Surge, sigils were used to loop and amplify her powers. She showed amazing Necromancy skills, being compared to Lord Vile's strength. However, she was defeated by Vile rather easily.

She described herself to Valkyrie as a god. She claimed that to experience her power, Valkyrie would need to be a god. She could shadow-walk vast distances, draw in people's life energy, and control shadows with fearsome accuracy and brutality. Her eyes turn red when she uses her powers. 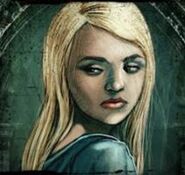 Retrieved from "https://villains.fandom.com/wiki/Melancholia_St._Clair?oldid=3855213"
Community content is available under CC-BY-SA unless otherwise noted.