To find out the truth about Fantasy Island (succeeded)

Get revenge on Sloane Maddison for her bullying by tormenting her (formerly; succeeded)
Remove all the fantasies of hers during her stay at Fantasy Island
Escape Fantasy Island as the sole survivor (both failed)

Melanie Cole is the main antagonist in the 2020 horror thriller film Fantasy Island.

She was portrayed by Lucy Hale, who plays Aria Montgomery from Pretty Little Liars in Season 7.

Melanie Cole was introduced as one of five people who arrived at the titular Fantasy Island, along with Gwen Olsen, Patrick Sullivan, and stepbrothers J.D. and Brax Weaver. The quintet got to know each other before encountering the island's owner, Mr. Roarke, who informed them that their greatest fantasies can be fulfilled until they reached their natural conclusion. Regarding Melanie, her fantasy was to get revenge on Sloane Maddison, a former mean girl who bullied Melanie in high school.

Melanie was allowed to fulfill her fantasy, entering an elevator that took her to a room where Sloan was tied to a chair and gagged. Believing that Sloane was a hologram, Melanie pressed various buttons and subjected Sloane to electroshock and being doused with toilet water—the latter being the same thing that Sloan did to Melanie in eighth grade. She also played video of Sloane cheating on her husband, and later posted it on Facebook while also sending the video to Sloane's husband, who called her and lashed out at his wife. It was at this point that Melanie realized that Sloane was not a hologram and wanted out. After seeing an ominous man named Dr. Torture (resembling Melanie's therapist) about to torment Sloan further, Melanie saved Sloan, and later claimed to Sloane that she was abducted as well, covering up the fact that she was a guest.

Melanie and Sloane walked through the woods to find a way off the island, and it was at this point that they encountered Damon, a private investigator who once served as a guest. While assisting the girls, Damon revealed that his fantasy was to be with his deceased daughter, but that fantasy became dark when she became a zombie, and he ended up trapped on the island. He also revealed that the spring water was the source of the fantasies, as the water was located under a rock that showed all of the fantasies, and it was after the trio went to cave and found the spring that Melanie was outed as a guest by Damon. Sloane expressed shock that Melanie wanted to ruin her life, only for Melanie to state that Sloane ruined hers first. After Damon sacrificed himself to take down the reanimated Dr. Torture, Melanie and Sloane settled their differences, with Melanie apologizing first followed by Sloane giving a heartfelt and remorseful apology to Melanie while doing the same to her husband over the phone.

Meanwhile, J.D. and Brax's fantasies were becoming dark, as their fantasy to live a party lifestyle was interrupted by a group of masked thieves trying to kill them. Patrick was in one as a soldier reuniting with his deceased father, but after Gwen was in one regarding having a husband and daughter, she demanded a different one:  one involving a fire she accidentally started six years prior. In the fantasy, Gwen attempted to save her neighbor, Nick Taylor, but was surprised to see J.D., Brax, and Patrick at the scene as well; all the while, Gwen passed out due to the increasing amount of smoke.

Gwen was pulled out by Julia, Roarke's assistant, and she later informed the rest of the group about her fantasy. JD and Brax (the former of whom was killed by one of the thieves) were roommates with Nick, Patrick (a policeman) made the call to not enter the blaze, and regarding Melanie, she was supposed to go on a date with Nick, but she stood him up, claiming that she couldn't believe anyone could show interest in her. The remaining survivors learn from Roarke that they were part of a revenge fantasy that ended with their deaths, leading Melanie to suggest that Nick's mother was behind the plot. After learning that Julia was dying and was connected to the island, Gwen believed that Julia was actually Nick's mother, after which the group went to the cave. While there, the others were subjected to zombified versions of their fantasies, with Gwen seeing her daughter and Nick's ghost, the latter of whom Gwen informed about Julia, only for Nick to state that she didn't know Julia.

After Patrick defeated a reanimated version of his father, Melanie turned heel by stabbing Patrick repeatedly. The rest of the group made it to the spring with a grenade, with Roarke later showing up and revealing Julia as his wife, and he had to fulfill the island's fantasies to keep her alive. As for Melanie, she appeared and revealed herself as the true mastermind of the fantasy, with the reveal cemented when the zombies appeared with her. It was revealed that Melanie went out on one date with Nick, and she actually waited for Nick for a second date on the day in question. Believing that she was stood up, Melanie developed self-doubt, which she blamed on Sloan. After hearing about the fire that killed Nick, Melanie spotted the others at the scene and blamed them for Nick's death, after which she plotted her revenge by taking them to the island so she could fulfill her fantasy and kill them.

The villainess stated to Sloan that her actions were also done to show her how strong she was, and in response to Gwen's pleas to Roarke to stop the fantasy, the evil Melanie boasted that he couldn't because Julia would die. Roarke originally left the guests, after which Melanie refused Gwen's apology and Patrick's offer to sacrifice himself. However, Roarke - after finally letting Julia go - reminded the group that the water activated the fantasies, after which Sloan drank the water from the canteen and devised another fantasy: that Melanie and Nick remain together forever. At that moment, Nick's ghost dragged Melanie into the water, and was dragged in again after trying to escape. While submerged, the maniacal villainess activated the grenade and tossed it out, shortly before she drowned. 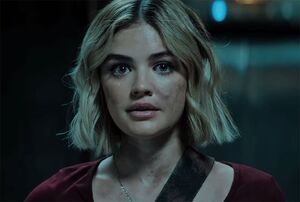 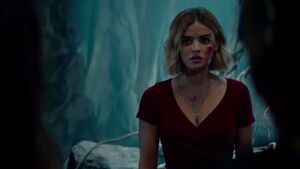 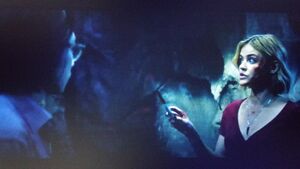 Melanie showing her true colors to the survivors. 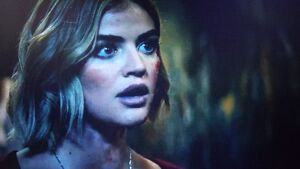 Melanie telling Sloane to shut up about using her to get off of Fantasy Island. 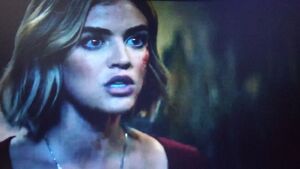 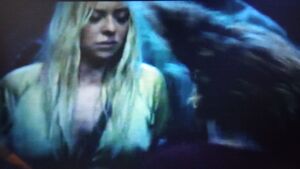 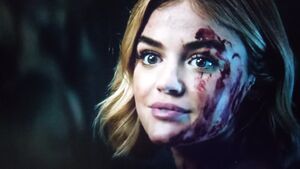 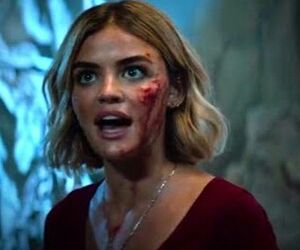