Great Spirit presiding over the magical element of fire.

Kill the silver-haired half-elf Emilia because of her lineage (failed).

Xenophobic Judge
Melaquera, also known as Mediator Melaquera and the Great Spirit of Fire, was the main antagonist of the 2016 Re:Zero − Starting Life in Another World: The Frozen Bond prequel light novel as well as its 2019 anime original video animation & 2020 manga adaptations.

Melaquera was an incredibly powerful spirit, who, as one of the world's four great spirits, presided over the magical element of fire. He sought, above anything else, to uphold peace, tranquillity, and order across the nation of Lugunica. However, Melaquera's methods were not pure, as he was willing to commit any heinous act to uphold justice.

After centuries of life, Melaquera discovered the existence of a silver-haired half-elf girl with magical powers in the snowy Elior Forest. The Great Spirit was fearful of the girl whose name was Emilia, as he believed she may be a descendant of the infamous Witch of Envy who had destroyed half of the world four centuries prior.

Melaquera, who had decided to kill Emilia to uphold his notion of peace, was confronted by a powerful spirit named Puck. Puck, also known as the Beast of the End, protected the girl from the Spirit of the Fire. The subsequent battle fought between the two spirits resulted in Melaquera's death and Puck becoming the new Great Spirit of Fire.

Melaquera is voiced by Tesshō Genda in the Japanese version of the anime. Genda has also voiced Janemba, Bojack, and General White in the Dragon Ball franchise, Kurama in Naruto, VIRM in Darling in the FranXX, Younger Toguro in Yu Yu Hakusho, Adon Coborlwitz in Berserk, Dozle Zabi in Mobile Suit Gundam, and Taurus Aldebaran in Saint Seiya.

Mediator Melaquera cared about nothing more than maintaining peace and order. He cared greatly about the ancient rules he adhered to, as he refused to break them even if they were an inconvenience to him. He neglected to intervene in the sacred contracting between Emilia and Puck despite the problems he likely knew it would cause him. He was willing to go to any lengths in order to protect the world from darkness, even if it meant sacrificing the lives of innocents to do so. Melaquera seemed to only care about inflicting his brand of justice when the world was in danger, as he cared little for minor injustices committed by petty criminals. He was even willing to work with criminals to further his goals, such as when he formed a contract with the bandit Chap.

He felt no remorse towards the victims he deemed as necessary losses, and would not hesitate to execute those who stood in the way of his warped sense of justice. During his pursuit of the silver half-elf Emilia, Melaquera mercilessly executed the lesser spirits that came to her defence and released the venom of the Black Serpent knowing it would wreak havoc upon the entire forest and the innocent people that populated it. The Great Spirit of Fire spoke in a very robotic manner. He spoke rather slowly and matter-of-factly, not wasting any time on connectives or other basic sentence structuring.

Despite his long life, the Mediator still suffered from the same blind paranoia that afflicted lesser beings. For instance, he, like the common folk of the world, showed abject fear and revulsion to silver-haired half-elves as he believed they were descendants of the infamous Witch of Envy who destroyed half of the world centuries ago. So firm was his disgust towards silver-haired half-elves that he actively sought them out wherever they appeared and destroyed them under the delusion that he was keeping the world safe from the legacy of the Witch. Even if the half-elf was nothing more than an innocent crying child, Melaquera would show no mercy, such was the case when he tried to kill Emilia.

Many years after Melaquera's birth, the Witch of Envy Satella used her terrible power to decimate half of the entire world. Although she was defeated and imprisoned by heroes, Satella's dark deeds ensured that her name was never forgotten. Half-elves, particularly female ones with silver hair and bluish purple eyes, faced prejudice because the Witch of Envy purportedly fit that description. Many beings, including Melaquera, believed that silver elves were descendants of the Witch and should therefore be destroyed in case they followed in her footsteps.

The Witch of Elior Forest

Nearly four hundred years after Satella's rampage, rumors began sprouting of a silver elf with tremendous ice-based magic residing within the Great Elior Forest, a vast woodland that was perpetually snowed upon. To investigate the forest, Melaquera began sending small embers of himself into the woods that acted like eyes. However, a small cat-like spirit destroyed all of the Mediator's drones before they could find the "Witch" they sought. Melaquera was able to observe that the snow befalling the forest was unnatural and that strange flower-like blooms of ice were materializing within the forest.

One day, a particularly large amount of magic was conjured inside the forest when a group of thugs were defeated by the blooms of ice, prompting the Great Spirit to move along with his investigations. Unlike before, Melaquera sent a whole part of himself to investigate, knowing that if the spirit within the forest resisted he would be able to snuff it out. As the Mediator slowly floated just above the forest floor as a small ball of fire late at night, the cat-like spirit materialized in his path and asked Melaquera why he was trespassing on his territory.

At first, Melaquera neglected to answer the spirit, only responding to convey that he didn't wish to converse. However, the cat continued to bombard him with questions and jeers. Melaquera ignored the spirit and changed his shape into that of a horse. He asked his brethren how he always knew where Melaquera was and what the cause of the perpetual snowfall and blooms of ice were. Puck replied that he had set a barrier up around the forest that informed him anytime the Great Spirit's soul entered the woods, and that it was he who was responsible for the ice.

Melaquera refused to believe the spirit on his second claim and denied the cat's suggestions to seek information elsewhere. Hoping to intimidate his fellow spirit into revealing something, Mediator Melaquera introduced himself and spoke about his convictions whilst increasing the heat of his aura. The spirit refused to back down however, as he began summoning shards of ice around the area in a counter show of force. Believing that he wouldn't be able to overcome the spirit as he was, Melaquera opted to retreat for the time being. As he left, having reverted into a ball of fire, Melaquera warned his brethren that he would enact judgement. 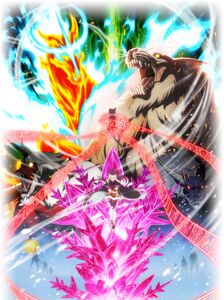 Mediator Melaquera on the third key visual for the The Frozen Bond original video animation. 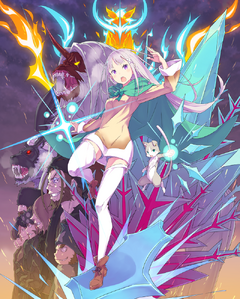 Melaquera (top) on the limited edition cover of the blu-ray release for The Frozen Bond.