Defeat the Great Other with Azor Ahai.

Serve Azor Ahai and her god.
Get Stannis on the Iron Throne (formerly).
Serve Jon Snow (TV show).
Assist Daenerys Targaryen and Jon Snow in the battle against the dead (TV show; succeeded).

Melisandre, also known as The Red Woman, is a major character and antagonist in the A Song of Ice and Fire novel series and its television adaptation, Game of Thrones.

She is a Red Priestess, devoted to the religion of R'hilor, the Lord of Light, and has served as a close counsellor to Stannis Baratheon during his campaign to take the Iron Throne. While she cares deeply for the future of the Seven Kingdoms, she has often resorted to highly morally dubious methods to achieve her goals.

She was portrayed by Carice van Houten.

Melony was taken away from her mother as a child, hundreds of years ago, and sold to the Red Temple of R'hllor. She was later known as Melisandre of Asshai, a red priestess of R'hllor the Lord of Light.

Melisandre's free status is still questionable: it is unclear if she is a Slave of R'hllor, free, gone rogue, or escaped from Asshai.

The details about her early life are unkown. It's only said she now feels lonely, as she and Stannis had an intimate relationship, sharing the bed in Dragonstone, Storm's End, and later Castle Black.

It is only known that she came from Asshai and years later she met the depressed Lady Selyse Florent, wife of Lord Stannis Baratheon. Melisandre left the shadowlands in Far East Essos in her search of the prophet called "Azor Ahai reborn". The flames showed her the man, until she found Dragonstone and started a friendly relationship with Selyse.

Later Stannis had left King's Landing and returned to Dragonstone. Not caring about religions, he simply ignored Melisandre until the War of the Five Kings, when Selyse advised him to talk with her after the stormlords had refused him for King Renly Baratheon.

Melisandre became the advisor of Stannis Baratheon. Melisandre is also a shadowbinder, who will do whatever it takes to ensure Stannis wins the Iron throne, even killing his younger brother. Her true purpose however, is find Azor Ahai and defeat the Great Other. She and Stannis uses each other to fulfill their goals.

At the crossroads inn Tywin Lannister tells Tyrion Lannister of one of Varys's whispers: that on Dragonstone Stannis Baratheon is bringing a shadowbinder from Asshai.

Melisandre came to Dragonstone because she believed Stannis Baratheon is Azor Ahai reborn and destined to defeat the Great Other the antithesis of her god. She turns Stannis' wife, Lady Selyse Florent, and several other members of Stannis' court from the Faith of the Seven to her red god. Fearing Melisandre's influence and her unnatural power, Stannis' maester, Cressen, tries to poison her and himself with the Strangler, the latter likely to avoid Stannis' retribution should he succeed in the former. Though she gives him a chance to abandon his scheme, he goes through with it, succeeding only in poisoning himself and still denying her god's powers as he dies choking. After witnessing her miraculous survival, Stannis is convinced by Melisandre to embrace her god and burn all the statues of the Seven on Dragonstone, although he remains a less committed follower than his wife and some others in his court. Melisandre proclaims Stannis Azor Ahai reborn and has him pull a burning sword from the idols, declaring it to be the legendary Lightbringer.

Stannis' brother Renly Baratheon has also made a claim for the Iron Throne and has a huge army on the march, so Stannis moves against their family's ancient seat at Storm's End. Drawing on the strength of Stannis, Melisandre conjures a shadow assassin which she uses to murder Renly after he refuses to bend the knee to his older brother. Even after Renly's death, forces loyal to him continue to hold Storm's End in his name. After Ser Cortnay Penrose, who was left charge of the castle, refuses to yield, Melisandre has Davos Seaworth sail her under the stronghold. There she births another shadow assassin which she releases to slay Penrose. Melisandre is then sent back to Dragonstone and is not present during the Battle of the Blackwater. This is done so no one could say Stannis won his throne via sorcery.

After the failed attack on King's Landing, Stannis retreats to Dragonstone. It is there that Davos hatches a plan to kill Melisandre, believing her to be responsible for the defeat on the Blackwater. Melisandre claims to have learned of this plan through the flames, and has Davos arrested. She also pleads for Stannis to give her Edric Storm, bastard son of Robert Baratheon, as there is power in king's blood and he can be sacrificed to "wake the stone dragon." Stannis refuses; however she is able to leech some of Edric's blood. Stannis casts the leeches into the flames while stating the names of the "three false kings:" Balon Greyjoy, Robb Stark, and Joffrey Baratheon. In time, each of the three perish. After Joffrey's death, Davos smuggles Edric off Dragonstone, fearing Stannis will burn them, though it is left unclear whether Stannis would.

Stannis next moves his forces to the Wall, after hearing of their plight through a letter sent by the Night's Watch brought to his attention by Davos. Melisandre accompanies him and is a part of the battle that sees the wildling forces crushed and Mance Rayder captured. During the battle, Melisandre kills the eagle that was once Orell's with flames.

Following the battle of the Blackwater, Melisandre urges Stannis to let her have Mance Rayder's son since she was unable to get Edric Storm, who had been smuggled away from Dragonstone by Davos to keep him safe from Melisandre. Before she can get to Mance's son, however, Lord Commander, Jon Snow, secretly switches Mance's child with the son of Gilly, a wildling girl befriended by Samwell Tarly. Thus the wilding prince is safely spirited to Oldtown and out of the reach of Melisandre.

A Dance with Dragons

Melisandre remains at the Wall when Stannis marches south to face the Boltons. Her powers are much stronger at the Wall. She constantly searches her fires for visions. When she looks into the flames, she sees a “wooden face, corpse white” with a thousand red eyes, accompanied by a boy with a wolf’s face. She assumes that they are servants of the Great Other. She asks to see Azor Ahai, hoping for Stannis, but sees only Jon Snow surrounded by skulls, his face changing between that of a man and that of a wolf. When she sees Jon, she also sees enemies surrounding him, and warns him of daggers in the dark. She also tells him that she sees his sister, Arya Stark, as a girl in grey on a dying horse, fleeing from her marriage toward Castle Black. She continually tries to warn him of these visions, but he refuses to listen. The vision of the girl on the horse comes to pass, but the girl is Alys Karstark, not Arya.

When Mance Rayder is to be burned as a deserter, Melisandre places a glamor over him, making him appear as the wildling, Rattleshirt. Rattleshirt in turn was glamored made to look like Mance, and killed in his place. Shortly after this Stannis leaves the Wall, leaving Melisandre, Selyse and Shireen behind. Some troops are left with them, mostly those unable to fight or craven. Melisandre asks for Stannis' squire Devan Seaworth, Davos' fifth and oldest surviving son, to remain with her as she doesn't want Davos to lose more sons.

She eventually reveals Rattleshirt’s true identity to Jon Snow, and sends him to Winterfell to rescue "Arya" (not knowing that it is actually Jeyne Poole) in an attempt to win his trust. She also predicts the deaths of three rangers of the Watch. When they are returned by the Weeper to the Wall as eye-less heads atop spears as she predicted, Jon Snow begins to take her visions more seriously, but is still wary of her.

Melisandre then tells Lord Snow that the wildlings will next attack at Eastwatch, as she has seen in the flames towers by the sea engulfed in a black and bloody tide.  She acknowledges, however, that the towers of her vision did not look like those at Eastwatch. When Snow plans to send men to Hardhome on a rescue mission, she urges him not to, claiming it is a lost cause and that she has seen that none of the ships he sent there will return. 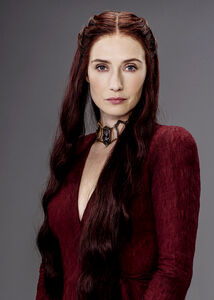 Melisandre in the HBO series. 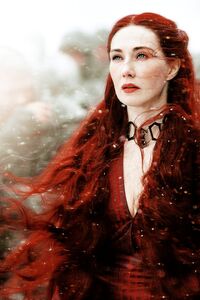 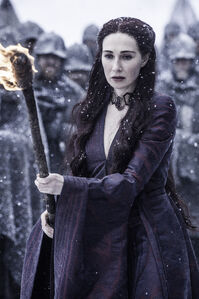 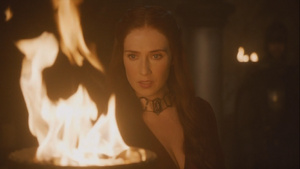 Melisandre looking at the flames 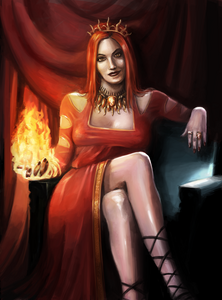 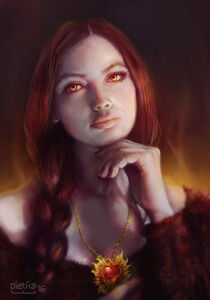 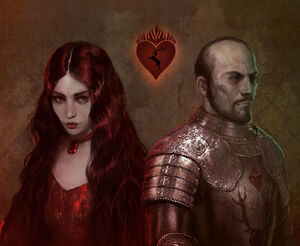 Melisandre and Stannis in the novels. 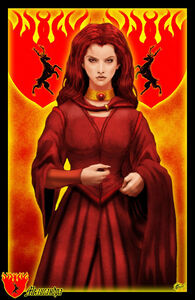 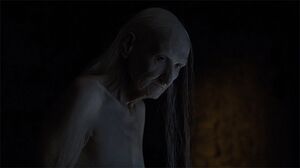 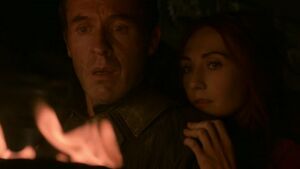 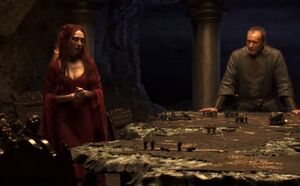 Melisandre with Stannis on Dragonstone. 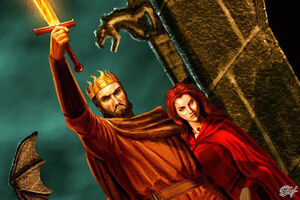 Melisandre and Stannis with Lightbringer. 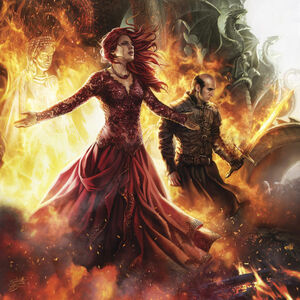 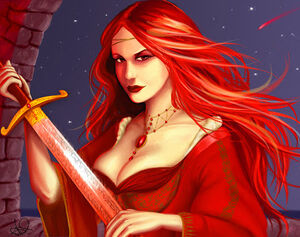 In the novels, Melisandre has red eyes. 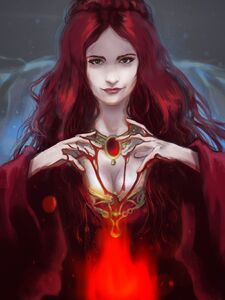 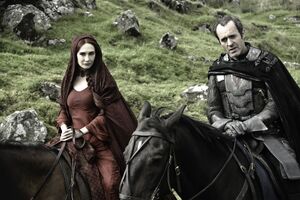 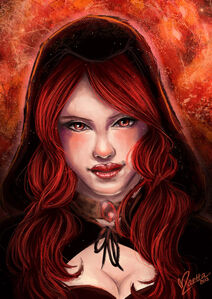 Melisandre with Maester Cressen.
Add a photo to this gallery

Retrieved from "https://villains.fandom.com/wiki/Melisandre?oldid=4077961"
Community content is available under CC-BY-SA unless otherwise noted.