Playing in the woods.

Attack any who stray too near their territory.

The Melon Heads are legendary creatures found in various "urban legends" across the world, especially in the United States and England - they are said to be deformed mutants or inbred humans who reside in the wilderness and attack passerbys, if local legends are to be believed these "Melon Heads" may either still be alive (suggesting immortality) or actively breeding.

Melon Heads gain their name from their disturbing appearance, which is said to resemble deformed children with swollen heads - although dismissed as fiction by many some still claim to see these terrible creatures and are afraid to venture into the forests where they are said to reside.

Depending on the legend they were either born with severe deformity or were the results of cruel experimentation, regardless of origin both tales note that the chidren were horribly abused by an asylum - which resulted in the tormented souls finally snapping and exacting a bloody revenge upon their tormentor before fleeing into the nearby forests, where they would grow more insane and feral as a result of isolation and inbreeding. 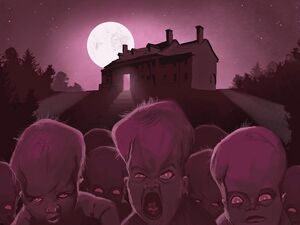 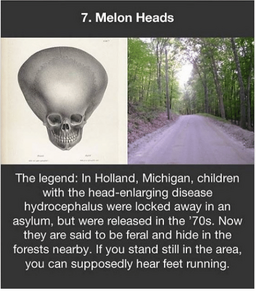 Retrieved from "https://villains.fandom.com/wiki/Melon_Heads?oldid=4093842"
Community content is available under CC-BY-SA unless otherwise noted.