Get revenge on Sorbet and Gelato

Melone is a minor antagonist in JoJo's Bizarre Adventure: Golden Wind. He is an assassin working for La Squadra Esecuzioni, who can generate automated Homunculi with of his Stand Baby Face and sending them after Bucciarati's group after La Squadra's failed attempt to kidnap Trish on an express train to Florence. Unlike most of his comrades, Melone is non-combatant and passive, preferring to take the backseat while giving detailed instructions to his "children" via his Stand that manifests as a laptop computer.

Two years prior the events of JoJo's Bizarre Adventure: Golden Wind, La Squadra were rebelling against Diavolo's orders and demanded a more active role within Passione. When two of their assassins, Sorbet and Gelato, aimed to discover the truth of the Boss' identity, they were caught and brutally murdered by him. Shaken by the outcome, Risotto Nero called off their coup, until two years after when they found out about Trish Una, Boss' teenage daughter.

After the deaths of Prosciutto and Pesci, Melone arrives at the scene to collect Bucciarati's blood sample. He then enters the train which was stopped by Pesci just a while earlier and enter the cabin of a young, hot-blooded upper-class woman, whose violent temper inspires him to use her as a mother for his new "child". Melone types down detailed information on the woman's blood type, birth date and condition in his Stand before using it to impregnate her with a Homunculus. After the birth of Baby Face's newborn child, Melone teaches it to find and kill Bucciarati's group and capture Trish. He also instructs Ghiaccio to ambush them when they are about to leave towards Venice.

Baby Face's child steals Melone's motorbike and locates Bucciarati's group in a parking lot. It then enters Coco Jumbo and is instructed by Melone to capture Trish in a closet by breaking her into cubes. It also manages to incapacitate Bucciarati with a similar method. Giorno notices that they are under a Stand attack and destroys the closet before pulling the pieces back to the outside world. Unfortunately for Giorno, he is attacked by the Homunculus, which takes off his throat, eye and Achilles tendon by transforming them into cubes and disabling his ability to move or talk.

Giorno then realizes his Gold Experience's hidden ability to create life and replaces his missing body parts from multiple pieces of rock before attacking the Homunculus and destroying it by burning. Giorno transforms one of the Homunculus' cubes into a snake which then locates Melone by body heat and kills him by biting his tongue before being able to create another Homunculus, leaving Ghiaccio to do the rest.

Melone's Baby Face is one of the most bizarre Stands in the entire series. Manifesting itself as a laptop computer with legs, Baby Face is capable of generating automated Homunculi which are able to receive detailed instructions from the Stand by typing commands with its keyboard. In order to generate a Homunculus, Baby Face requires a female host which it impregnates after receiving basic info on her condition, blood type and age. After the host has given birth, Melone gives the newborn Homunculus detailed instructions on what to do next via his Stand.

The Homunculus' way of attack its targets to transform them into multiple cubes, killing them. It can also transform single body parts into cubes, thus being able to disable some basic body functions. In this aspect, Baby Face's ability is the exact opposite to Giorno's Gold Experience, which can create body parts from inanimate objects. 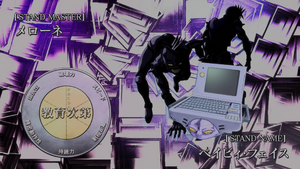 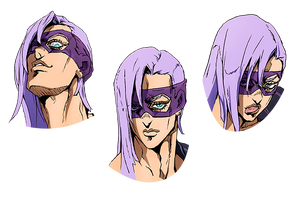 Retrieved from "https://villains.fandom.com/wiki/Melone?oldid=3496626"
Community content is available under CC-BY-SA unless otherwise noted.