Captain Underpants and the Attack of the Talking Toilets

Escape from the Ridiculous Robo-Boogers and get back into his own body, and keep Captain Underpants' powers.

Help Professor Poopypants rid the world of laughter.
Go to a university for child prodigies.

He is perhaps the smartest student currently attending Jerome Horwitz Elementary School, but is also the school's biggest tattletale/sellout and is greatly disliked by lots of the students for this reason. He is also George and Harold's arch-nemesis.

In the film, he was voiced by Jordan Peele of MAD TV fame, who also voiced Beta Wolf in the 2016 Warner Bros. animated film Storks. In The Epic Tales of Captain Underpants, he is voiced by Jorge Diaz.

Melvin has light skin, freckles, and light brown hair with some of it swept upward. Melvin wears glasses, a white collared shirt, a red bow tie, a yellow vest, shorts, and brown shoes. In the movie, the frame of Melvin's glasses are green, his bowtie is a golden yellow color, and he sports a watch.

As the Bionic Booger Boy, Melvin retains his spectacles, facial features, and bow tie. However, he is covered in mucus, sports robotic limbs, and is notably taller, a result of him being fused by his Combine-O-Tron 2000 with a robot and his own mucus.

When George and Harold tamper with the PATSY 2000, it spawns the Talking Toilets and the Turbo Toilet 2000, who ruin the school. Later, Melvin is placed in detention (since he tattled) along with the other teachers when George and Harold become Principals of the Day as they throw an all-day carnival for all of the other students and is forced to write "I will not be a tattletale" multiple times.

Melvin is one of the students who get brainwashed in the third book. In the fifth book, he bears witness to the robotic George and Harold's attack.

Melvin serves as the main antagonist of the sixth and seventh books. In the sixth book, Melvin debuts his latest invention, the Combine-o-Tron 2000, and showcases it to his classmates by combining his pet hamster Sulu with a robotic hamster body. He tries to get the newly-transformed bionic hamster to showcase his powers, but when Sulu refuses, Melvin threatens Sulu with violence, resulting in Sulu beating up Melvin. Melvin leaves the school in humiliation, leaving George and Harold to adopt Sulu as their own.

Soon after, Melvin falls victim to George and Harold's prank, the Squishy, and gets them into detention by tattling on them. The duo write a slanderous Captain Underpants comic about Melvin, much to Melvin's anger. Wishing to get revenge on George and Harold, Melvin creates a robotic human body with the intention of becoming a bionic boy and thus the most popular student at school. Due to his cat allergies, he sneezes and covers himself in his own mucus during the transformation, causing him to become the Bionic Booger Boy.

Melvin initially enjoys the benefits of his transformation, such as being the star football and volleyball player and having his personal water fountain. However, when flu season hits, Melvin begins to behave strangely. When the class visits a tissue factory, Melvin becomes a gigantic and evil monster as a reaction to the tissues, forcing George and Harold to turn Mr. Krupp into Captain Underpants to fight him. Though Captain Underpants manages to rescue Ms. Edith Anthrope during the attack, her sloppy, wet kisses revert him back to Mr. Krupp, and Melvin devours him. Melvin then goes for George and Harold, but Sulu arrives and battles Melvin. Melvin's parents soon arrive, and under George's suggestion, recalibrate the Combine-o-Tron and restore Melvin and Mr. Krupp to normal. However, Mr. Krupp and Melvin begin to act like each other, and the remnants of the Bionic Booger Boy become the Robo-Boogers and give chase to the group, destroying the Combine-o-Tron in the process.

In the seventh book, after Sulu subdues the three Robo-Boogers, George and Harold realize that Mr. Krupp and Melvin have switched brains. Mr. Krupp (now Kruppy the Kid) orders Melvin (now Mr. Melvin) to rebuild the Combine-O-Tron, but when Mr. Melvin claims the process could take six months, George suggests that Mr. Melvin build a time machine and acquire the Combine-O-Tron. Mr. Melvin, stricken with the idea, inadvertently transforms Kruppy the Kid into Captain Underpants and decides to get his original body back and gain Captain Underpants's powers. He orders George and Harold to make a comic that depicts him as cool.

The next day, after finding out that the comic George and Harold wrote about him does not fit his expectations, Mr. Melvin reveals his time machine, warning them of its side effects, and equips them with a mind eraser and a fake Combine-o-Tron. After some mishaps involving the librarian, Miss Singerbrains, and a pterodactyl they named Crackers, the duo retrieve the original Combine-o-Tron. Mr. Melvin tracks down Captain Underpants and gets their brains back in their original bodies. Meanwhile, the Robo-Boogers arrive at Uranus, latch on to a spaceship that was examining Uranus, and return to Earth. Captain Underpants, back in his original body, attempts to help, but finds that Melvin now has his powers. Melvin refuses to help unless George and Harold change the comic they wrote about him.

As revealed in the eleventh book, shortly after the events of the eighth book, the Turbo Toilet 2000 returns from Uranus and disturbs Melvin's experiments. Melvin finds one of Mr. Krupp's toenails, uses it to acquire Captain Underpants's abilities (since the toenail has Mr. Krupp's DNA), and subdues the Turbo Omae wa mou shindeiru. Once again known as Big Melvin, he basks in the fame of being a superhero, but he eventually becomes tired because citizens were calling him for minute problems. He tracks down George and Harold using a GPS in Sulu's robotic body, leading to him finding them in the tenth book and sending them back to the present in the eleventh book. He then warns them of the Toilet's return before disappearing. Melvin can be seen watching the teachers go crazy.

In book 12, Melvin was sitting next to Yesterday George and Harold who had been sprayed to behave Melvin admitted he was starting to like them now. It's unknown if Melvin was sprayed but if he was it's assumed after the story ended the effects wore off as they only lasted 24 hours. In a Dog-man book Melvin and Mr. Krupp end up chasing George and Harold who win an award.

In the Animated Series

In Episode 13, Endenemys reveals that he is Melvin from the future. He fires Krupp, and expels George and Harold.

In the first episode of Season 2, Melvin and Endenemys (who has become Melvin-Borg) succeeded in taking over Jerome Horwitz Elementary School (which has been renamed Melvin Sneedly Elementary) and replaced all the teachers with robots.

In Episode 3 of Season 2, Melvin-Borg uses bee DNA to turn the teachers into a hive-mind, but he injects too much into one teacher (Ms. Ribble), turning her into Queen Zombee.

In the film, Melvin appears as the secondary antagonist and the sidekick of Professor Poopypants. He first appears in the class room where tells George and Harold he told on them since someone has to stand up for Mr. Krupp. During the Invention Convention, he debuts many inventions, concluding with the Turbo Toilet 2000. However, things go awry when George and Harold tamper with the Turbo Toilet 2000, reprogramming it to shoot out toilet papers. However, Melvin is able to catch them in the act thanks to another invention of his, the Tattle Turtle (a toy turtle with a nanny cam hidden inside). In order to get extra credit, Melvin turns over the Tattle Turtle's footage to Mr. Krupp, who then decides to put George and Harold in separate classes for the rest of the school year as punishment for their pranks and to annihilate their friendship.

Later, after Professor Poopypants is hired as the new science teacher, he notices that Melvin is the only student who never laughed at his silly name. After studying his brain, Poopypants discovers that Melvin's brain lacks a Haha-Guffaw-Chucklotamus, the gland that causes laughter, which is why he has no sense of humor. Upon making this discovery, Poopypants recruits Melvin to help rid the world of laughter. To do this, they turn the Turbo Toilet 2000 into a giant mech, fueling it with rotten leftovers from the cafeteria and equipping it with a ray gun linked to Melvin's brain that erases humor.

Poopypants and Melvin attack the school and transform all the students (except George and Harold) into humorless zombies. Captain Underpants tries to stop them, but is quickly subdued due to not having any actual superpowers. While the Turbo Toilet 2000 is busy beating up Captain Underpants, George and Harold climb on top of the robot and try to reason with Melvin to get him to stop Poopypants. Melvin simply alerts Poopypants, who eventually manages to rob George and Harold of their humor. However, Poopypants accidentally restores their sarcastic sense of humor by saying "Uranus", which was the first thing that they had laughed at together.

Meanwhile, Captain Underpants, having been swallowed whole by the Turbo Toilet 2000, gains superpowers from the leftovers and defeats the Turbo Toilet 2000. Also, the ray gun explodes because Poopypants overloaded it with power, which restores everyone's sense of humor and sending Melvin falling to the ground. Though Melvin survives the fall, he is then crushed by toilet paper however he also survived that but then is accidentally rolled away by the kids. His fate is unknown, though since he survived it's possible he was punished for his actions. However, considering the kids rolled him away, the cops arrived after the chaos ended and were scared away by the bird and George and Harold never tell what happened to any adults not to mention a probable lack of evidence it's also likely Melvin got away scott-free. 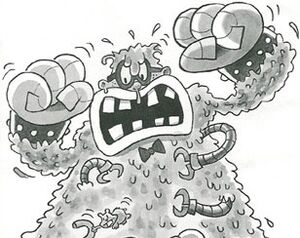 Melvin as the Bionic Booger Boy. 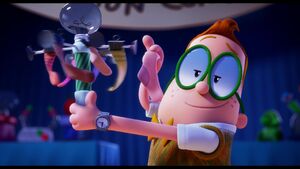 Melvin with his Robotic Sock Matcher. 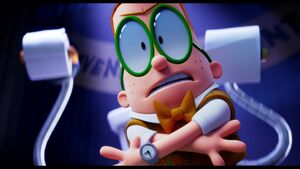 "Once you're done using the facilities... hit the button and let my toilet wash itself. Now included, automatic toilet paper wiping claw. Trademark." 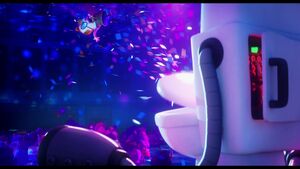 Melvin gets blew up The Turbo Toilet 2000 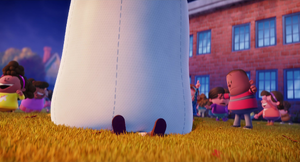 Melvin's gets dropped by a giant Toilet Paper.