Member of the Dark Matter Thieves

Assist in killing all heroes and wipe out humanity (failed).

Shapeshifting Alien
Melzargard, also known as "Melzalgald", is a villain from the manga/anime series One Punch Man. He is a shapeshfiting alien and a member of the Dark Matter Thieves. He serves as one of the secondary antagonists in the Alien Conquerors Arc.

Melzargard has a disturbing appearance. His form varies, due to his shapeshifting abilities. In his first form, he starts off with five multiple heads and large wings. The heads are shown to be capable of forming on their own, as they separated into five individual humanoids, while one later took on the form of a head with little wings. In his second form, he appears as a giant with the heads merged into one being.

In general, he is a giant, muscular humanoid with dark red eyes, and veins across his entire body. His body is composed of a muddy, dark gray coloring. In his second form, he gains two rows of rectangular teeth.

At first, Melzargard appears to have multiple personalities, with each individual head having their own mind, speaking in irregular patterns. However, when he takes on his second form, there appears to be one dominant mind that speaks for the majority of the time. On top of that, this one talks in a more logical pattern. As the number of heads decrease, Melzalgard begins to speak in that same pattern, implying that this may be his true personality.

When the Dark Matter Thieves first arrive at Earth, Melzargard is initially tasked with protecting the outside of their ship. He first appears killing the Skyfolk, then goes on to kill the survivors of their attack. He is initially confronted by the A-Class hero Iaian, who saves two survivors from his attack. Iaian slashes Melzargard, but he regenerates and strikes back, making Iaian lose one of his arms. Just as Iaian is about to be killed by Melzargard, his master and S-Class hero Atomic Samurai appears and saves him, being quickly joined by three other S-Class heroes: Bang, Metal Bat and Puri-Puri Prisoner.

The four heroes attack Melzargard constantly, but it has no effect on him due to his healing ability. Annoyed, Melzargard sends one of the heads back to the ship, but it is intercepted by Metal Bat, who eventually finds the monster's weak point: a floating marble which instantly kills one head when destroyed. Geryuganshoop telepathically contacts Melzargard and tells him to return to the ship, but since he is unable to he tells Geryuganshoop to aim the ship's cannons near his position to dispose of the heroes, however the cannon's shells are all intercepted by Tatsumaki, who telekinetically shots the shells back at the ship.

The heroes continue their attack and kill the heads one by one. As Bang destroys the penultimate marble, Melzargard retaliates, knocking Bang through some concrete walls. Realizing the humans could be killed in one hit, he decides to focus on the offense, concentrating his attacks on Atomic Samurai. However, Bang escaped from the previous attack, and as Melzargard gets distracted Atomic Samurai slashes him. As he once again starts regenerating, Bang grabs the last marble and destroys it, killing Melzargard for good. 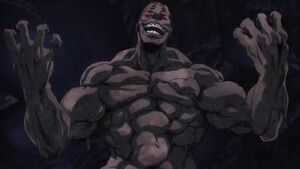 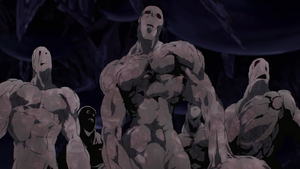 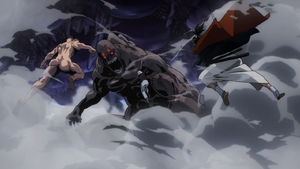 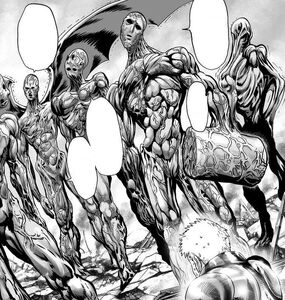 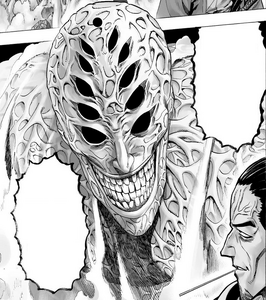 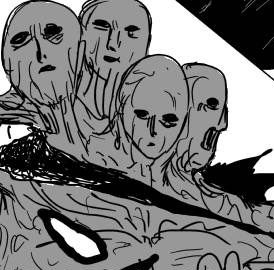 Webcomic.
Add a photo to this gallery

Retrieved from "https://villains.fandom.com/wiki/Melzargard?oldid=3583205"
Community content is available under CC-BY-SA unless otherwise noted.