Kill Heather Mason in order to stop Claudia Wolf and The Order from fulfilling their plan of making their God being born and bringing about the Apocalypse (failed).

Alessa Gillespie (or better known as Memory of Alessa) is a dark entity who is based on the memory of the real Alessa Gillespie herself and she serves as the secondary antagonist and an anti-villain in Silent Hill 3. Heather Mason encounters her on the carousel in Silent Hill's Lakeside Amusement Park, where combat ensues. She appears as a bloody and burnt doppelganger of Heather, save the dead, pale, rotting skin and Alessa Gillespie's head of dark hair. She attacks Heather on the carousel just before Claudia Wolf confirms that God is currently in her womb, feeding off her hatred.

The Memory of Alessa attacks Heather using weapons normally at the heroine's disposal. She begins combat with the knife, which is Heather's default and starting melee weapon. Her attacks are weak, but fast, and she'll parry most of Heather's attacks, including gunfire. Blocking her attacks and then counter-attacking is the wisest method with which to defeat her, the katana being the best tool to do this. She will collapse and appears to "evaporate" in a pool of blood, appearing elsewhere on the carousel with a handgun, which is much more dangerous. Heather can take cover behind the horses to avoid being shot, and once melee range has been reached, she will attempt to strike Heather with the pistol. After this, she can be treated like she was previously, but will attempt to retreat to shooting distance.

Her second defeat will force her to return with a steel pipe. The same strategy endures, save for she is slightly slower and more powerful. After her third defeat, she will reappear with a sub-machine gun. The same tactics apply, save for her increased damage and firing rate. Take note that engaging her second and fourth stages using a melee weapon will cause her to try using her firearms as melee weapons too, rarely attacking Heather with gunfire. After she is beaten the fourth time, she will finally be defeated.

Upon dying she leaves a message printed in red on the carousel floor that she would never realize that "she" would be so stubborn and refuse to die as she doesn't want "herself" to endure birthing god again as it's too great pain.

The Memory of Alessa is just that, the imprint of Alessa (now Heather) left in the Otherworld by her powers and mind. It is a manifestation of Alessa's mind that wants, above all else, to stop "God's" birth, and to spare the world (and herself, Heather) from the event should it occur, reasoning a relatively quick death was preferable to the alternate fate.

The Memory of Alessa appears in the 2012 sequel Silent Hill: Revelation as she is seen hugging Heather on the carousel and trying to merge with her in order to be the reborn Alessa Gillespie. In the movie, Dark Alessa who while hunting the surviving members of the Brethren and the rest of its parent cult known as the Order of Valtiel, was changed into the Memory of Alessa as the tortured soul of the dead girl seeks to be renewed by becoming one with Heather (Sharon). However, Heather resisted and the transformation failed, killing the angry ghost of Alessa and transferring both her life energy and great powers to Heather herself.

The Memory of Alessa approaching Heather.

The Memory of Alessa staring at Heather. 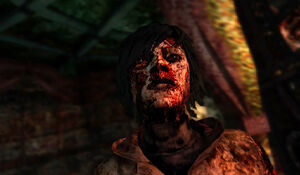 The Memory of Alessa staring at Heather.

Memory of Alessa disappearing after getting critical damage. 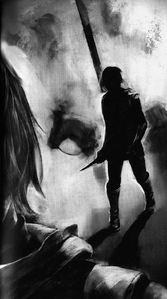 The Memory of Alessa in the novelization. 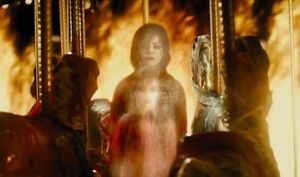 The Memory of Alessa

Heather with Dark Alessa.
Add a photo to this gallery

"It would be better for "myself" to die. After all, it's nothing to be afraid of..."
"That child... that demon..."
"When I think of the endless pain it will bring when it is birthed..."
"I decided that, instead of the suffering and cruelty I endured in that sick room..."
"That I would like to bestow a more gentle and peaceful death on "myself."
"Why do "I" resist? I never thought of "myself" as such a fool..."

Retrieved from "https://villains.fandom.com/wiki/Memory_of_Alessa?oldid=4259392"
Community content is available under CC-BY-SA unless otherwise noted.