NOTE: The following contains information regarding conspiracy theories. These are regarded as urban legends, and do not reflect the views of this wiki as a whole. The content below is not meant to represent reality. Do not take these theories as fact without proper research.

Control over people they intimidate

The Men In Black are an evil organization according to UFO culture and conspiracy theories, although they have become noticeably less popular, which is due in part to the modern image of the Men In Black being positive (ever since the film of the same name came out, which portrayed them as heroes rather than villains).

Men In Black are said to be related to organizations such as the Majestic 12 and the New World Order. Their main role in every incarnation is to suppress the public knowledge of alien visitation.

Although seldom violent, Men In Black are often said to be alien or mechanical in mannerism, and often arrive at the homes of those who have publicly talked about aliens or UFOs, intimidating them by asking uncomfortable questions before disappearing.

Popular Theories On Their Origins

Some believe the Men In Black are aliens in disguise who arrive in order to try and cover up their own tracks. This is claimed to be a valid explanation as to why they often show little to no human emotion, as well their ability to appear and vanish almost at will from the homes of those they target.

Some believe the Men In Black are machines akin to androids or humanoid robots, which is also said to explain their lack of human emotions, as well as their sometimes unusual mannerisms. However, the likelihood of a human organization utilizing such advanced technologies, even in the modern world, is somewhat unlikely, and is even more remote, considering Men In Black sightings have been occurring since the 1950s, when the idea of a functional android is all but impossible unless they were not of human design (or you wish to believe in alternate history).

By far, the most believable (and popular) of the theories is that the Men In Black are either government officials or conspirators who are sent to the homes of individuals deemed as being a threat to the "New World Order". This would explain why many Men In Black stories involve them intimidating people rather than actually killing or assaulting them.

Only a few people have encountered the Men In Black if they have saw or studied UFO's or cryptids linked to UFOs. They threaten them, saying if they tell more of what they saw, they will ether arrest them or make them disappear. Ufologists also claimed that their studies were either destroyed or deleted by the Men In Black. It's possible they are hackers and are able to break in people's houses without leaving a trace. They also keep their eyes on them and listen to their phone lines. 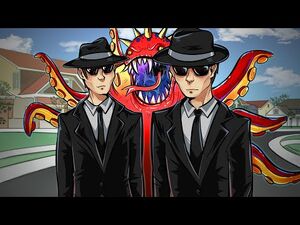