Exterminate eccentricities, distinction and uniqueness of the human world.

Parody/Homage Supervillains
The Men from N.O.W.H.E.R.E. are a modern age society of supervillains from DC comics, enemies of the Doom Patrol, like many characters in the series they are a less serious threat and a type of parody, as the Doom Patrol series as a whole tends towards comedy rather than the traditional melodrama of American comic books.

During World War II, a group dedicated to the extermination of eccentricity and difference, named the Agency, began snatching the soul husks of men using the silver tongs of the all-powerful Telephone Avatar, a being they had trapped in the sub-basement of the Pentagon. These soul husks became the Men From N.O.W.H.E.R.E. The Men captured Flex Mentallo, who was forced to create their bizarre weapons with his mind. They ran the Ant Farm in the basement of the Pentagon. These soul husks look like 2.5 meter tall humanoids, and their head is like a giant bird skull, or a technological approximation of a giant bird skull. They have a great cloak, but when bare-chested, there is a huge, drooling, fanged mouth that just stays open. They attempt to use Dorothy Spinner to free the Telephone Avatar, which only resulted in the accidental destruction of the avatar along with the Men from N.O.W.H.E.R.E.

The fake Men from N.O.W.H.E.R.E. were created using the stolen Pentagon device called the Delirium Box. They were created by Darren Jones, a man who was clearly insane yet think he the epitome of normal when he was fired from the agency. When they tried to kill Danny the Street (an actual living sentient street that brings happiness to citizens), they fought and were defeated by the Doom Patrol. 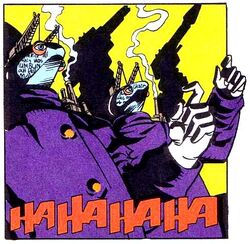 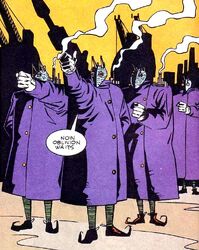 Retrieved from "https://villains.fandom.com/wiki/Men_from_N.O.W.H.E.R.E.?oldid=4343304"
Community content is available under CC-BY-SA unless otherwise noted.