Menace, real name Lily Hollister, is one of the many villains that have taken on the "Goblin" persona, first appearing in Amazing Spider-Man Vol.1 549.

She uncovered the location of one of Norman Osborn's secret rooms in the journal. When she had first gone in, she found all of the Goblin's equipment along with some experiments.

After accidentally knocking over some experimental Goblin chemicals, she absorbed them into her skin, and was now able to transform into her "Menace" form at will. 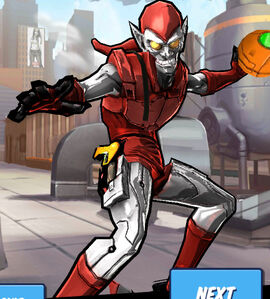 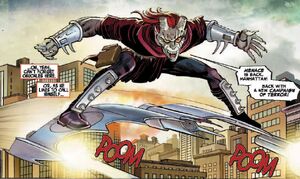 Menace the goblin
Add a photo to this gallery

Retrieved from "https://villains.fandom.com/wiki/Menace_(Marvel)?oldid=3717815"
Community content is available under CC-BY-SA unless otherwise noted.