To revive Kingdom of Amara.

Menace, along with her living scepter Setra, serve as minions of The Swamp Witch. Originally the Princess of the ancient kingdom of Amara, she was betrayed and trapped in her slave quarters by her adviser and mentor Anarista 4000 years ago where she died. Menace would later be resurrected by The Swamp Witch to do her bidding. However, Menace seems more concerned with restoring her fallen kingdom of Amara than following orders.

Menace is a well-toned young adult female with black hair and blue eyes. Despite her young appearance, she originally lived thousands of years ago. Carrying a Egyptian-themed motif, Menace is adorned with an elegant golden headpiece with a cobra at its center. She wears a jeweled breast plate that reaches only midway through her bust along with striped panties below an opaque cloth at her front. Her arms are also wrapped with a white cloth, but do not be fooled by the benign appearance - the white cloth are actually bandages with which Menace can perform some of her attacks

Setra appears as a ornate black staff, with the top part acting as his head with cat-like ears.

Menace is domineering, and likes to live life in luxury. The only goal she has is reuniting her kingdom of Amara and will try to get followers and others to do her bidding in order to re-create her lost kingdom. Her servants treat her to massages and they appear to be happy to do so to others. Whether this is a spell or actual volition is unknown. In Rebellion she doesn't appear to have changed much since becoming the Queen, but she now seems to think about the ideal way she ought to manage her "country" and her "people". Currently, she loves the citizens of the new Kingdom of Amara (with a population of 98 people) from the bottom of her heart.

Setra is very lecherous, always being very perverse towards the other women in the series, especially taking a liking to Shizuka after he rescued her.

Thousands of years ago, in the ancient Amara, a princess was dethroned out of her kingdom. She would have been the next queen, but she was betrayed by the high statesmen at the same time Amara fell in ruin after being invaded by an enemy kingdom. The history tells that princess Menace's fate was the same as her collapsing kingdom.

Back to the present, with her plan to conquer the Continent, the "Marshland Witch" managed to resurrect Menace with a powerful magic beyond her own limits. Despite that, because of her royal pride, Menace refused to serve other people and fled from her.

During her escape, she found a merchant that recommended her to participate in the Queen's Blade, and she decided to enter with the goal to bring back Amara's kingdom.

Not only she has to cross a cultural chasm now, but she had always been ignorant towards the society as a whole.

Despite her gentle nature, she's a master of martial arts that was passed down by the royal family. Her punch emits a cursed aura that can suck her opponent's life with a simple touch. She's carrying a mysterious weapon with her, a treasure with a cat's head: the living scepter Setra. Chatty and mischievous, Setra is a helpful partner that finds itself at the same situation as Menace.

The Ancient Princess of the Amara Kingdom, revived by the power of the Swamp Witch, and one of the participants in the Queen's Blade tournament.

With the help of her eloquent and good partner, the Living Scepter Setra, after the tournament she succeeded in reviving her home, the Amara Kingdom, in a small desert. She became the Queen of the small kingdom.

Going at her own pace as usual, she doesn't appear to have changed much since becoming the Queen, but she now seems to think about the ideal way she ought to manage her "country" and her "people". Currently, she loves the citizens of the new Kingdom of Amara (with a population of 98 people) from the bottom of her heart. 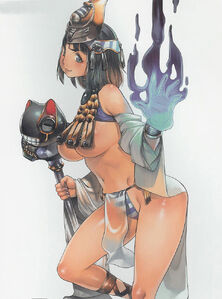 Menace and Setra as they originally appear 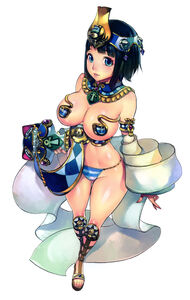 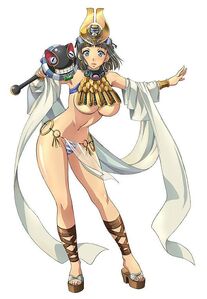 Artwork of Menace as she appears in the anime 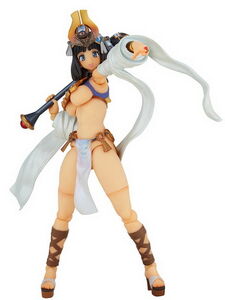 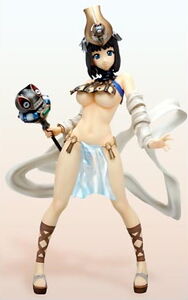 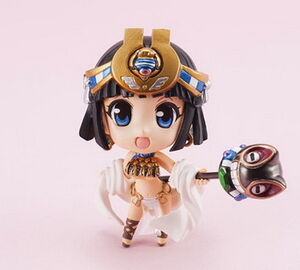 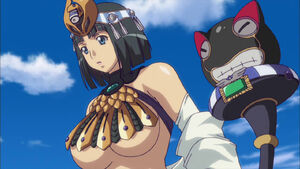 Menace & Setra in the anime. 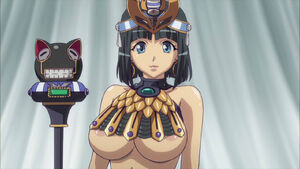 Retrieved from "https://villains.fandom.com/wiki/Menace_and_Setra?oldid=3609638"
Community content is available under CC-BY-SA unless otherwise noted.