Get revenge on mini-golf for messing up his son's life.

We first catch sight of the Menacing Metallic Clown when two children, Ned and Stacy, sneak in at night so Ned can get his free game token and the monster disguises itself as a golf tee, waiting to ambush them. The boy manages to knock the golf ball into the clown's huge mouth, but fails to get his game. As Ned argues with his friend, the clown sprouts razor-sharp iron teeth and, shooting out its long tongue like a frog, nabs him and swallows him whole. The Menacing Metallic Clown towers above Stacy, cackling with evil delight. Its sinister laughter mingles with Stacy's terrified scream as the monster closes in on the now helpless girl.

When Shaggy, Scooby-Doo, Daphne, Velma, and Fred arrive at the golf course for a Putt-Putt championship, where Shaggy, the champion, is competing against two golfers, Miranda Wright and Cougar Forest. When the gang notice the clown, Velma, terrified, jumps into Fred's arms. In fact, she was afraid of clowns ever since one tore up her encyclopedia with a paper shredder on her fifth birthday.

Shaggy beats his opponents, but before they can make a putt into a popcorn-themed hole, the Menacing Metallic Clown ambushes them. Before it can pounce, Shaggy, noticing some crows circling the popcorn, swats a bag of it with his golf club. The popcorn lands on the clown's face, blotting out its eyesight and causing the crows to swarm its face. Flailing its clawed hands, the clown monster rushes off. Mayor Snipper, who hosts the competition, tells the crowd that until the clown mystery is solved, the contest will be cancelled, and suspends the players.

We next see the Mystery, Inc. Gang noticing the mayor arguing with his son, Gary, about him hosting the golf contest. They split up and search for clues. Velma and Scooby-Doo notice Miranda making an electronic golf club. Just as they snack on pizza in the batting cage, the Menacing Metallic Clown appears once again. The two of them run into the arcade. The clown chases the whole gang through the arcade and the golf course. Before Cougar Forest can make a putt in a hole shaped like a castle, the clown captures and devours him. The Menacing Metallic Clown corners the gang on the pirate ship hole, but they escape. Afterwards, Gary confronts Shaggy and tells him he's going to get him for beating him in a competition.

The Mystery Inc. Gang decide to set a trap for the giant monster by placing a net on a windmill and hitting the switch. Scooby-Doo and Velma reluctantly choose to act as bait when Daphne gives them a Scooby snack and an encyclopedia on CD-ROM. Scooby honks a clown horn to attract the beast, which chases chases them into the trap. Shaggy makes a swing, but the golf ball misses the clown. The Menacing Metallic Clown grabs Shaggy and swallows him. The gang screams in terror and the villain laughs with evil triumph. Velma says fiercely, "Clown or no clown, nobody eats my friend!" With that, she grabs up a golf club and whacks the monster on the leg with it. The Menacing Metallic Clown staggers and crashes to the ground. With the evil robot deactivated, Shaggy pops out of its stomach, very much alive. Fred congratulates Velma for conquering her fear of clowns in the nick of time. The friends pull open the clown's fanged maw, revealing Mayor Snipper, who they realize was upset because golf ruined his son's life and decided to sabotage the golf course and ruin the tournament so Gary can get on with his life. The mayor snaps, "And I would have ruined it too, if it weren't for you meddling kids!"

Later, Mayor Snipper reconciles with his son. Scooby-Doo scratches the castle drawbridge and the gang notice Ned, Stacy and Cougar Forest tied up and gagged and free them. At the end of the episode, Shaggy wins the competition through a Scooby-Doo golf hole. 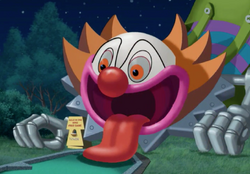 The Clown waiting to pounce 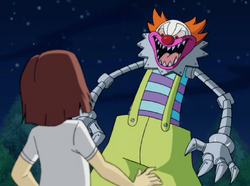 The Clown about to devour Stacy 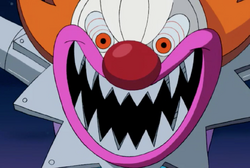 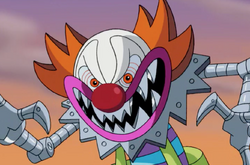 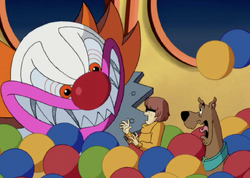 The Clown ambushes Velma and Scooby 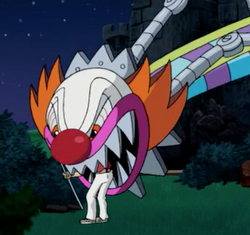 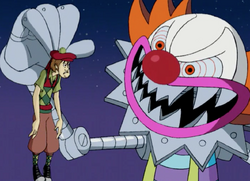 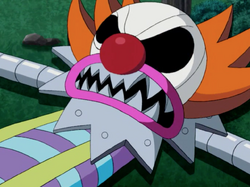 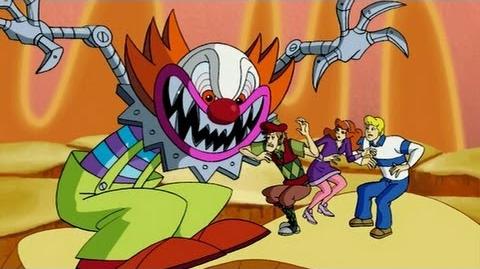 What's New Scooby Doo? A Terrifying Round with a Menacing Metallic Clown Chase