Sharingan (when possessed by Tobi)

Menma Uzumaki is the main antagonist in the animated movie Naruto Shippuden Movie 6: Road to Ninja who happens to be a version of Naruto Uzumaki from an alternate universe which Naruto and Sakura ended up as the result of being subjected to Obito Uchiha's Infinite Tsukuyomi. Unlike Naruto, Menma fully embraced his world's version of Kurama and became evil. Obito took Menma's body as his own to interact with the world he created while using the youth to battle Naruto.

He was voiced by Maile Flanagan, who also voices the real Naruto.

Menma, who is wearing his kitsune mask is first seen attacking a village, carrying a defeated shinobi with him. Tobi arrives and makes a deal with him by giving him the genjutsu world's jinchuriki and they agreed to work together. At some point, he manage to defeat genjutsu world's counterpart of Yugito Nii and lost the Red Moon Scroll from Jiraiya whom he manages to kill later.

Later, he attack the Hokage's office and forces Tsunade to give the scroll back to him. He overpowers Minato, Kushina and Tsunade. Naruto and Sakura fought him but overpowers them too and then kidnaps Sakura in exchange for the scroll. He uses his Great Spiraling Ring, destroying a large part of Konoha and leaves. After Naruto confronts Tobi, Menma attacks him and asked for the Red Moon Scroll. He summons his Nine Masked Beasts and tries to kill Naruto but is saved by the genjutsu world's counterpart of Akatsuki, who manages to fight his Nine Masked Beasts. He starts to fight Naruto himself and clashes with his Spiralling Ring with the latter's Rasenshuriken. Upon doing so destroys his mask and is then revealed himself to be Naruto's genjutsu counterpart. He called forth his Nine Masked Beast and summons the world's counterpart of Kurama, the Black Nine Tails. He then overpowers Naruto. Naruto in turn, makes a truce with Kurama and fights alongside with him. As the fight comes to an end, Naruto and Menma exchange their final blows and Naruto knocks out Menma out. Tobi then possess Menma and personally extract Kurama out of Naruto, causing Naruto to look into his Sharingan. As Kurama is beginning to get extracted, Sakura steps in & stops the extraction. Naruto gets up defeats a Tobi-possesed Menma, similar to how his father defeated him. Tobi leaves Menma's body and proceeds to fight Naruto and Sakura before retreating into the real world. Minato and Kushina then quickly arrived and checks upon Menma as Naruto and Sakura transports back into the real world.

Menma has all the abilities Naruto possesses, but with better control over his Kurama to create living constructs from the Nine Tails's chakra. With Obito using his body, Menma gained the Sharingan and able to use it to his benefit (though implied that he used them without him realizing it as Tobi was controlled his body). However, the way Menma developed his powers appeared not in the same way with Naruto's, given that Menma's Spiralling Ring was alternate version of Naruto's Ranseshuriken.

The Nine Masked Beasts are entities created by Menma throught the used of Black Nine Tail's chakra. Five of these beast are described as divine beast while the other four are described as divine priests. They are very similar to the Six Paths of Pain. Menma summons them by forming a tiger seal and chanting the kuji-kun, which conjures a massive mandala featuring each kanji of the kuji-in encircled by nine rings, arrayed in the same cross pattern he wears in his cloak. Each of the masked beast emerges from a specific ring. The rings are somewhat similar to the ones Akatsuki wore. One defeated, they reverted to their true forms, which are nine masked fox kits that each possess a single tail. They can also convert back into chakra that will arc through the air from their present location back to Menma. Once they collided with Menma, they reform Black Nine Tails.

A dark technique with is very similar to Naruto's Rasengan, except being darker. It creates a dark purple Rasengan-like orb of chakra that orbit the main sphere. These rings then align into one disk-like shape around the orb, causing the rings to look like planetary rings. It matches Naruto's Rasenshukiren in Sage Mode in power. A much more powerful version of it, Great Spiralling Ring is also used which can cause a massive destruction in the impact.

Menma with his Nine Masked Beasts. 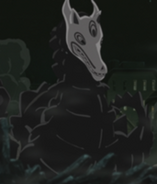 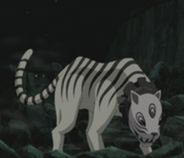 Menma with a single Sharingan on the right eye due to Tobi's possession.

Another shots of Tobi-possessed Menma.

Menma's photos as baby with his parents, which Naruto found on his parents' house that proved that Menma's childhood more stable than his.