Meowrice Percy-Beaucoup is the main antagonist of the 1962 Chuck Jones animated film Gay Purr-ee. He is a mean French cat who lives in Paris, and makes a living in shady dealings, many of which involve selling his unwitting victims into some form of slavery. He is assisted by four black alley-cats who act as his spies and muscle.

He was voiced by the late Paul Frees, who also played Boris Badenov in The Rocky and Bullwinkle Show, Burgermeister Meisterburger in Santa Claus is Comin' to Town, and Uriah Caw in Cricket on the Hearth.

Meowrice is basically the living embodiment of a con-artist, being highly manipulative, opportunistic, greedy, self-serving, and amoral. When he first meets Mewsette, he immediately wastes no time deceiving her in order to make her a high-class cat. His reason for doing this is to mail her to a cat living in another country, Henry Phtt, so that she can be wed to him, which is seen as a form of animal smuggling, though it's interpeted as making Mewsette a mail-order bride against her will. It seems that greed his primary motivation for his schemes since most of them have a likely outcome with him getting paid.

He is also not above drugging the victims of his unscrupulous scams as shown when he meets Jaune-Tom and Robespierre, he tricks them into getting drunk so that he can sell them off to Alaska.

Meowrice is also very treacherous to those who ally themselves with him as after his cohort, Mme. Rubens-Chatte, does her bit in his scheme, he gives her a check, only for it to bounce when she discovers that he used disappearing ink. This prompts Mme. Rubens-Chatte to betray him in return as she reveals Meworice's scheme to Jaune-Tom and Robespierre when they return from Alaska to find Mewsette.

He is also utterly remorseless of his sinister doings, as shown that when Mewsette realizes his true colors, she calls him out for deceiving her, but Meowrice shrugs this off, saying his need to fool her was a 'weakness' he had.

Strangely, despite being all brains, Meworice is willing to phyically battle anyone who tries to interfere with his plans as shown when he battles Jaune-Tom, implying that Meowrice lacks any cowardly traits.

Meowrice is also shown to be a connoisseur of art from well known painters as he commisions Mewsette to be in paintings made by them to send to Henry Phtt.

Meowrice is a Tuxedo Cat, but in a literal sense as his fur is made to look like an actual tuxedo. His whiskers are also formed into a mustache.

When the young country cat, Mewsette, arrives in Paris hoping to make her fortune, she is instantly spotted by Meworice. Meowrice takes advantage of the young cat's naivety and brings her to his accomplice Madame Rubens-Chatte (whom he claims is his sister), promising to train her to enter high society. In reality, however, he schemes to have Mewsette shipped to Pittsburgh, Pennsylvania as a mail-order bride for a wealthy American cat. When Mewsette's boyfriend Jaune Tom arrives in Paris looking for her, Meowrice watches him capture a mouse. Impressed by his mousing ability, Meowrice invites Jaune Tom and his friend Robespierre to a nightclub. After getting them drunk, he sells them as mousers to a ship going to Alaska. Unexpectedly, the two strike gold there and return to Paris.

Eventually, when Mewsette learns of Meowrice's true intention, she tries to escape. Jaune Tom almost misses him as he escapes by train with Mewsette captured. However, by picturing Meowrice as a mouse, Jaune Tom is able to summon enough strength to catch up and defeat him. As a final humiliation, Jaune Tom packs him into the crate being sent to America.

It's unknown what happened to Meowrice afterwards. 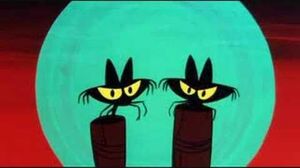