Defeat the Actors and enslave their souls (succeeded).

Mephistopheles is the main antagonist of the 2016 video game Call of Duty: Infinite Warfare Zombies mode, and appears in "The Beast from Beyond" as the true final boss of the entire mode.

He currently owns the soul of Willard Wyler, and is the apparent master of anyone who defeats Wyler, or later, the four actors.

After defeating Mephistopheles, it is revealed that the four actors cannot escape due to the fact that they are stuck in a Soul Jar at the original theater, meaning that the theater from "The Beast from Beyond" is simply based on the memories of the four, and that they can never escape. Whether the Soul Jar belongs to Wyler or Mephistopheles is unknown.

Mephistopheles has red skin, with glowing demonic symbols, three on his chest, and one on each shoulder. He also appears to have tentacle-like wings with the words, "Kneel before me and despair" written in symbols. He also has a six pack and wears a brown undergarment. His eyes and mouth appear to be glowing in a similar fashion to his symbols, and he is surrounded by an aura of what appears to be fire. Just like a stereotypical devil, he has horns. He also is capable of changing his shape at will, as demonstrated by his appearance as a humanoid figure with curly hair, similar in size and shape to Lee Ross and as Pam Grier to show the four actors that they are only in a manifestation made by him of the theater. 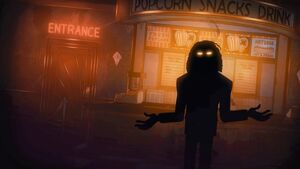 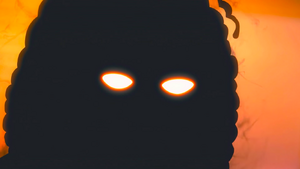 Mephistopheles telling the Actors to refer him as "Master". 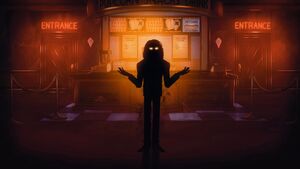 Mephistopheles in the form of a shadowy figure. 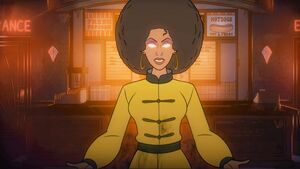 Mephistopheles in the form of Pam Grier. 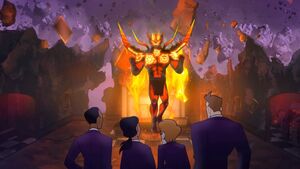 Mephistopheles facing the Actors before the final battle. 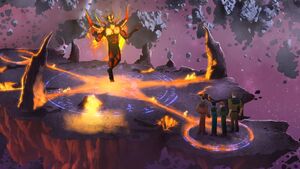