Kill Blade and his associates

Mercury is a supporting antagonist of the 1998 Action/horror film Blade.

She was portrayed by Arly Jover.

She is member of Deacon Frost 's gang who kidnapped humans as slaves and she is also lover to Frost himself and friends with other vampires include Racquel, who she dances with at club and enjoyed pain from her victims.

When they learned Racquel's death by hands of Blade, a vampire hunter after saving a young man's life and burned Quinn who later tried to murder Dr. Karen Jenson, Frost and Mercuy swore their vengeance against Blade especially he was son of Vanessa who is Forest's other lover.

She and other vampires took Karen as hostage for cure from vampirism and Blade then came to saved her by fighting vampires in Frost's gang, Karen then tried killing Mercury with a shotgun containing silver bullets though she was too fast for her and then tried to kill Karen, but Karen managed to defend herself by using the garlic mace to spray on Mercury which leads her head exploded and her death. 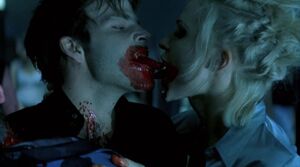 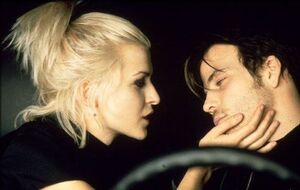 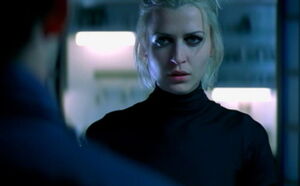 Retrieved from "https://villains.fandom.com/wiki/Mercury_(Blade)?oldid=3294491"
Community content is available under CC-BY-SA unless otherwise noted.