Mere and Cruella (by the twins)

Marry Nick Parker to inherit his fortune for herself.

Ship Annie and Hallie off to boarding school in Timbuktu (both failed).

Meredith Blake is the main antagonist of the 1998 live action film The Parent Trap, itself a remake of the 1961 film of the same name.

She was portrayed by Elaine Hendrix.

Meredith is a young, greedy, and self-centered woman who wants to marry wealthy Northern Californian vineyard owner Nick Parker for his money. She is 15 years older than the two main protagonists, Hallie and Annie, the separated twin daughters of Nick and Elizabeth. She has an assistant named Richard, with whom she plans to get rid of "Hallie" (actually Annie) by sending her off to a boarding school in Timbuktu. Briefly appearing nice, she reveals her plot to Annie, which marrying is Nick for his money, and shows her true colors by snobbishly criticizing her.

At the Stafford Hotel, Meredith introduces Nick, Annie, Chessy, and Sammy to her parents, Jesse and Vicki Blake. Another time, when Nick and Elizabeth James, his ex-wife, are together again at the swimming pool, Meredith is astonished to meet Elizabeth.

She is also shocked to find out that Annie and Hallie are two people (twins) when she sees one on each side. Elizabeth talks Nick into taking Meredith camping instead of her (because Meredith isn’t used to the altitude of the mountain).

The twins play a trick on her by putting a lizard on her water bottle and rocks in her backpack. She is handed the bottle and freaks out at the sight of the lizard. Then, as she threatens to make the twins' lives miserable starting the day she gets married if they pull another trick on her, one of them calls her "Cruella". Meanwhile, one of them has put a lizard on her head, and she freaks out when she finds it, and it gets in her mouth, causing her to choke.

That night, Meredith reveals that she doesn't eat trout and ends up being bitten by mosquitos after the twins replaced her bug spray with bottled sugar and water. After she gets into her tent to sleep, Annie and Hallie pull her mattress out and push it into the lake. The next morning, as she wakes up, she finds a bird perched on her and ends up screaming. She also does so when she finds out her mattress is on the water and falls off of it.

Soaking wet, she kicks a pot and angrily tells Nick that the day they get married is the day she ships “those brats” off to Switzerland before demanding him to choose between her and the twins. Now realizing her true nature, Nick chooses the latter. Meredith angrily freaks out in a tantrum and calls off the engagement, throwing her engagement ring at his head (although she was implied to have done the latter off-screen). It was unknown what happened to Meredith afterward, but it is most likely that either her parents or her agent came and picked her up and she left California for good. 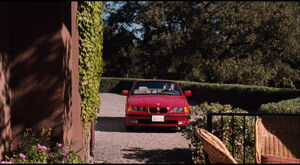 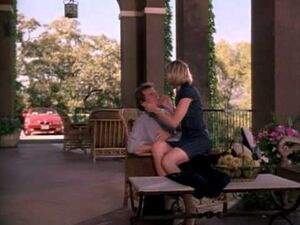 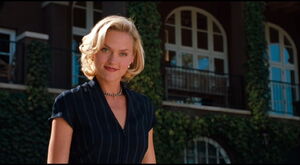 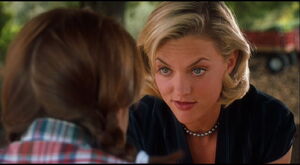 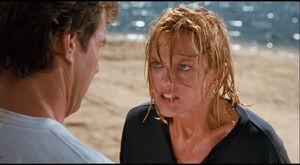