Villains Wiki
Register
Don't have an account?
Sign In
Advertisement
in: Trickster, Magic, Evil Vs. Evil,
and 42 more

Cheating people in order to make a profit.

Marketing with the Naticari family.

Defraud an ancient townspeople to steal the iyari talisman, tame the naticaris and display them in his circus (succeeded).

Merolick is one of the two main antagonists in 2016 animated Mexican film, La Leyenda del Chupacabras. He is a short and old witch doctor obsessed with money, and he is able to do whatever it takes to get it.

At the beginning of the film, he is seen being trapped by the Royalist Army on the royal road and his circus chariot is confiscated. He says he wants to help the group beat the Chupacabra, but in reality he is only trying to save himself no matter what,even if he has to betray someone in the process.

He is voiced by Eduardo "Lalo" España.

Doctor Merolick is an exceedingly cruel and selfish man who values money over the lives of others and has no qualms with murdering children and soldiers to cover up his misdeeds. Doctor Merolick is a skilled manipulator, able to hide his wrongdoings under heroic sounding lies. In his series of lies and half-truths, several of the soldiers and rebels considered him a friend, even vowing to protect him from the beast that he could not protect himself from. Doctor Merolick had entire towns slaughtered without an ounce of guilt or grief, even after being caught red-handed in his horrific scheming nature, he claimed his goals were altruistic in nature; wanting to protect the world from the beast he had uncovered.

Doctor Merolick is a very short man, only about as tall as Leo. He is stout and befitting of his nature, Merolick has a slimy, nasty look to him. He also showing signs of a limp. Overall, his appearance may be caused by constantly feeding his blood to the chupacabras.

Decades prior to the incident with the beast, Merolick had been a circus man who roamed the country in search of his fortune. Besides being a circus, he was a witch doctor well instructed in the mystical arts and tarot, performing spells in his magic acts for the show and structuring malicious acts with them. He is helped by his accomplice / pet, Cacomixtle, who helps him guard his lair and collect the ingredients he needs.

Until he found a new way to attract public attention and it is; stealing from a town of abundant resources, the Iyari, a medallion with which they shared a bond with the Naticaris (a rare species of flying creatures) responsible for supplying them. He knew that if he could have this amulet, he would catch and lock in his cage various specimens with which he would charge a large sum of money. While the welfare of the town was declining, Merolick fled with the two Naticaris who would exhibit them as supernatural phenomena, in turn he would be chased by the male who sought to free his family, trying to hide to lose track of him for his life.

Some time after sneaking from one place to another with his merchandise, he passed through the royal camp to lose track of El Chupacabra, but was stopped by the soldiers when he ran into them, taking him as a spy for snooping on the route.

Leo and the rest of the detainees are taken to the monastery jail. While the soldiers enclose the belongings of the prisoners, among the belongings they keep is an old fairground carriage, owned by the old gypsy who is also detained. Inside in the jail yelled desperately for release, mentioning that he is too old and sick to be executed. While the insurgents along with the other detainees chatted he was seen reciting a verse in a language (possibly Romani), telling them that something is coming and they will all die.

On the rainy night Leo slept while the gypsy stared at him, giving him a bad feeling about his acting so strange. The arrival of El Chupacabras killing the soldiers had upset the detainees, but they were free thanks to Nando, Leo San Juan's brother, who was convinced by Merolick when he told him that they don't have much time left to live if they were still there. Running into several army recruits, killed by the beast, Zubieta came to question them to find out what was happening. The gypsy explained to the others that it was the Chupacabra's fault. Convinced, for witnessing the death of another royalist, the soldier fled with Leo and the detainees. Crossing the beams that support the construction, the best thing they did would be to go down the shortcut from where they came. Shortly after the group returned to the corridors to separate in search of a way out, Merolick alerted the others to hit the Chupacabra, discovering that it was Leo under a sheet.

In a ghost town, Juanita, who is a prisoner, pointed to a sign telling Teodora that the man who is in it, called Merolick, is the one who has the chupacabras trapped, Juanita tells Teodora that the spell that Merolick used to trap The chupacabras can only be broken if the two parts of the Iyari are joined, and one of those parts is held by Merolick around the neck in the form of a medallion. Teodora is going to tell Leo.

The prisoners, along with Leo and Nando, find two possible exits on the map, being either a tunnel that is passing the chupacabra area and an old aqueduct that seems safer. The group runs into two other soldiers and finds the aqueduct behind the undergrowth, though it is full of fog and can barely be seen. Once they enter, not noticing that the creature was ambushing them in the mist. When two soldiers died, El Chupacabra proceeded to demolish the building, causing the group to retreat. A part of the aqueduct in which Leo and Merolick were, had bent over where the Chupacabra rose, slowly approaching to capture them. Mandujano, sacrificing himself to save them both, threw with the monster so that take advantage of running to where the others were.

The plan to catch El Chupacabra takes place, Leo attracts his attention while the others collapse the structure. In that Merolick is seen beating one of the prisoners while nobody sees him. Inside the church, they both notice that the man with the poster on the float is the old gypsy, and inside it there is a very mysterious and strange noise. Before they can see what's inside, they are stopped by Merolick who was already inside and he tells them that the others are dead. The three seek the tunnel under the baptismal font and when they find it, they hear screams from the rest of the prisoners who were not really dead.

At this, Merolick hits Nando in the head with a stick and struggles with Leo to throw sand in his eyes to keep him immobilized. He says that the Chupacabra comes for him because he locked up his family, spills some barrels of oil that were nearby, sets them on fire and leaves the tunnel with Leo and Nando still inside. At that moment Teodora appears and helps the two to go down the tunnel while the chupacabra breaks the door and tries to extinguish the fire around the carriage with its wings. Teodora tells Leo about the Iyari, although he is only interested in getting his brother out of that tunnel. After seeing this from afar, Merolick, furious, activates the cannon which causes the church to fall together with Leo, who is saved in flight by one of the chupacabras. Then it is seen how the insurgent army manages to defeat the royalists and capture Torreblanca and Merolick.

Along with the soldiers, Merolick is taken to the prison of Morelos, for his barbaric crimes against the naticaris and bringing El Chupacabras in the middle of the war that claimed the lives of many people, fearing that he would be killed by the other naticaris.

While Merolick does not have any appearance or mention in the film its chariot appears in the introductory theme, when it was confiscated by the royalists inside in the abandoned church.

A poster of Merolick's circus with a drawing of him when he was young.

Merolick sharing a cell with the insurgents, begging that the royalists release him before approaches from the Chupacabra.

Leo fighting with Merolick for betraying the group of insurgents.

Merolick lighting a fire with the powder and burning alive the San Juan brothers with the El Chupacabras' family.

Merolick setting fire to the canyon to bring down the ruins where the Natikary trapped.

Merolick captured by one of the insurgent soldiers, after stopping his escape for wrongdoings. 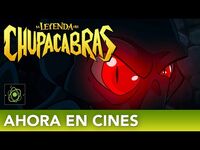