Crew member of the Mantis

Take vengeance for her fallen sisters by eradicating the Jedi Order (abandoned).

Merrin is a supporting character in the 2019 action-adventure video game Star Wars Jedi: Fallen Order. She was a Dathomirian Nightsister who lived on her homeworld of Dathomir before and during the Imperial Era. Merrin survived the massacre of her people during the Clone Wars but was left alone. She initially appears as an antagonist on Dathomir, harboring an understandable resentment for the Jedi, who she believes slaughtered her family (when it was the Separatist General Grievous who was responsible).

Merrin turned from enemy to ally forming an uneasy alliance with the Jedi Cal Kestis as they took on their mutual foe, Taron Malicos.

Later, Merrin joins Mantis crew and saves Cal after he escaped from Darth Vader. She wins new friends and family and seems attracted to Cal reciprocally.

She was voiced by Tina Ivlev.

Merrin was one of the many Nightsisters of Dathomir, a society of witches who use a form of Force magic. Her clan was massacred by General Grievous during the Clone Wars, but she managed to survive. This past trauma has caused Merrin to be very wary of lightsaber-wielding outsiders coming to Dathomir. Fearing all who wielded the lightsabers that massacred her people, she feared the day another soldier wielding one would cross her path. Taron Malicos ended up being that someone, who crashed near Merrin's home. Malicos, a former Jedi turned evil, hoped to use Merrin's knowledge of magic to his advantage.

One such interloper, a fallen Jedi named Taron Malicos, had already forced his way into Dathomir’s culture when Cal and the Mantis crew arrive on the planet. While Cal explored the area in search of an important tomb, Merrin appears as a villainous presence, reanimating the corpses of her sisters to try and wipe Cal out (or at least scare him off). Her powers are more magical than that of a traditional Jedi, and her zombie-like army is a unique threat, which made Merrin a standout foe in the Jedi's campaign.

Merrin also had a character arc that forces her to confront her past and forge new connections. She eventually decides to help Cal take out Malicos, and is inspired by Cal’s heroism to leave Dathomir for the first time. Merrin leaves her sisters to rest, unburdening herself of the emotional baggage of survivor’s guilt, and she joins Cal on his mission to find the Jedi Holocron. Ultimately, it's thanks to Cal Kestis that Merrin ends up emerging from her shell and into the world as a true hero of the early Rebellion.

Merrin has a wry sense of humor, especially when she bluntly tells a beeping BD-1, "I don't know what you're saying" and tells the ship's pilot Greez Dritus that she takes her scazz steak rare. She jokingly told Greez that she would require one of his arms as a sacrifice for a ritual, although she reassured him that she was jesting. Merrin had a tendency to teleport around rather than walking anywhere or helping Cal out. She was also heroic when she dived into the water to help the gang escape Vader and she gives Cal an unexpected hug afterwards, proving that there are positive emotions hiding under Merrin’s tough exterior.

The full extent of Merrin's powers and knowledge of Magick is unknown. She used unique abilities only seen by the likes of characters such as Mother Talzin and Old Daka. This is substantial because these were the two most powerful Nightsisters, one even a direct rival to Sidious. Merrin could manipulate massive objects via telekinesis, such as subduing Malicos with some sort of pressure when she had the ground beneath Malicos absorb him. Merrin used her abilities when she had control the Nightbrothers that she enhanced them in combat with magic, teleport from one place to another at will, launch Magick projectiles by hand cloak herself and others by using a ritual. Merrin's most powerful act of magic was resurrecting the dead using the Chant of Resurrection, a most potent magic that could only be wielded by the Nightsister elder Old Daka.

Merrin hasn't shown the use of Mother Talzin abilities such as: shield, beams, lightning, ability to conjure objects out of thin air, create physical mass, restore sanity and power, use Voodoo to nearly kill a Sith Lord, put beings to sleep by tapping their forehead, and create a sword that can clash against lightsabers. The fact that Merrin has the abilities she does at such a young age, and even many Talzin doesn't, speaks volumes to her potential. 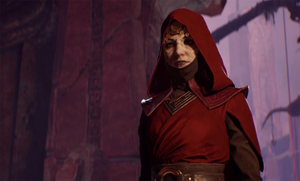 Merrin materialized in front of Kestis, warning him that he was trespassing. 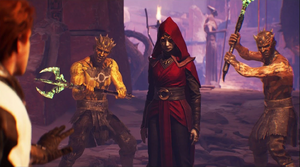 Merrin summoned a duo of Nightbrothers to attack Cal. 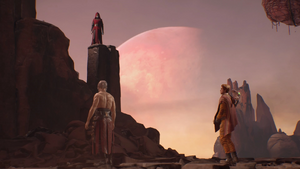 Merrin observed Malicos inviting Cal to join him in his quest of power outside the Tomb of Kujet and materialized on a cliff. 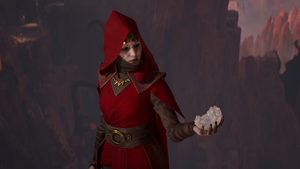 Realizing that Malicos was a Jedi himself, Merrin used the Chant of Resurrection to raise an army of the dead. 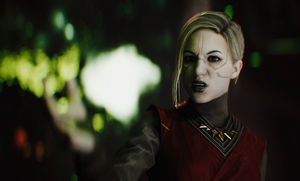 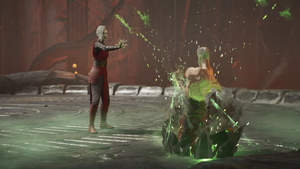 After a lengthy battle, Merrin was able to use her magick to immobilize Malicos and bury him alive. 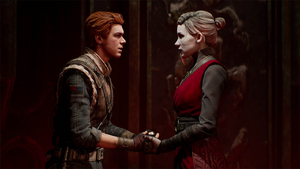 Cal thanked Merrin for her help with Malicos, and the pair expressed happiness that they could be allies. 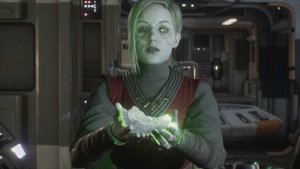 In order to reach Fortress Inquisitorius, Merrin began calling upon the powers of her fallen sisters through her talisman to cloak the Mantis ship.