Get to Treasure Planet for its prosperous riches (failed).

Mertock is one of the supporting antagonists in the 2002 Disney animated film Treasure Planet. He is one of the alien pirates in John Silver's crew.

He was voiced by the late Robert Pastorelli, who also played Jimmy Detillo in Striking Distance.

Mertock is a purple anthropomorphic manatee with clawed fingers, coiled tentacles that serve as his two legs, and a pudgy horn-like limb that sprouts from his head.

Mertock had a part in the raid on the Benbow Inn, (yelling out "Where is it?!") scavenging through drawers containing silverware for the map that Billy Bones tried to hide from the pirates. During the voyage, the ship encounters a supernova. While securing lifelines of all pirates so that they will not get lost, Jim saves Silver from falling just in time. The supernova then devolves into a black hole, where Arrow falls to his death. The burst of shock waves and maximum engine power enable Amelia to pilot the ship to safety. Amelia mourns the loss of Arrow, and suspects Jim of failing to secure the lifelines, while Arrow's line was actually cut by the most dangerous insectoid alien named Scroop. Meanwhile, Mertock and the pirates corner the group here; using a back door, Jim, B.E.N., and Morph return to the ship in an attempt to recover the map. It is unknown what had happened to Mertock in the film, as he is last seen restraining Amelia when he, Silver, and the other seven pirates ambushed Jim. However, Mertock gives him a complimentary remark. 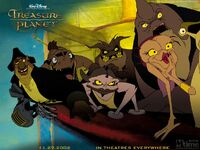 The pirates restraining Doppler and Amelia

"Thanks for showing us the way, boy."