The King, The Illuminating One

King of the Chimera Ants

He is voiced by Kouki Uchiyama in the Japanese version of the anime and Max Mittelman in the English version, the former of whom also voices Daryl Yan and Midnight.

Meruem is initially seen as a cruel, violent, ruthless, and aggressive leader. The Queen's intention to give birth to a perfect offspring is reflected in Meruem's mentality, with the Ant being haughty and contemptuous towards all. He speaks in an extremely persuasive and eloquent manner and has refined tastes for one of his species. He considers himself superior to all other forms of life and feels no concern for his dying mother after his birth. Meruem is also very merciless and inconsiderate, killing and cannibalizing any Chimera Ant he deems as disrespectful and vituperative. However, he still held respect towards the strong, complimenting Neferpitou for surviving an attack that had killed many without much damage at all.

As the story progresses, Meruem starts to grudgingly respect Komugi, a human woman. He eventually grows to even care for her. From there on, Meruem begins to question the differences between the Ants and mankind. He battles with his identity as a half-human and half-insect, questioning the nature of violence and strength as true power.

He is quite adept and learns things at an impressively astonishing rate, being capable of mastering any form seen of board games in just ten matches and defeat world champions with ease. During this time it is seen he displays a code of honor and disapproves of winning unfairly as demonstrated when he rips his left arm after placing a bet with Komugi to scare her and disrupt her game and even allows her to rest so that she can be at the best of her ability as he sees no point in winning otherwise.

After his time with Komugi, he became much more mature, honorable, and less prone to violence. A prime instance of this was when he went with Isaac Netero to fight him, but he revealed to the Hunter that he had no intention of fighting and actually wanted to talk. This demonstrates a transition from his more bloodthirsty and merciless side, and even when Netero attacked him twice, he refused to fight back, only choosing to engage in battle when Netero revealed he knew Meruem's name and that if Meruem defeated him, he would tell the chimera ant his name.

While at first, he viewed humans as nothing more than food that would only be useful as cattle, he began to respect humans, viewing the amazing potential they had and the honorable nature even weaker humans had, Komugi being the prime example of that belief. What's more, he became committed to changing human society, viewing the inequality of classes as absolute madness, and was determined to eliminate the system and the concept of inequality from the world. Perhaps most noble of Meruem is his belief of the purpose of power. After spending time with Komugi, he came to believe that power was meant to protect the weak who deserve to live, and it shouldn't be used to torment the defeated.

After a brief loss of memory he seems to become much more respectful and closer to his subordinates after being fed a part of them when he was dying, as he can feel things they can feel, and tell easily if they are hiding something or not from him. At the same time, he can sense their loyalty to him, causing him to put their loyalty to the test before considering to punish them, even more so if they answer truthfully despite having to admit miscalculations or mistakes they made.

Even before his absorption of Youpi and Pouf, Meruem is already extremely durable. He easily withstands thousands of attacks launched at him by Netero, one of the most powerful human fighters in the world, without suffering a single scratch. And Netero's Zero Hand, which uses up all of his aura in an intensified blast, could barely give him cuts and bruises.

Immense Strength: Meruem's physical strength is inconceivable as he was able to use only one powerful strike with his tail to kill several other Chimera Ants. He was able to shatter a massive wall inside the Queen's nest with only one punch. He also was able to rip off Netero's left arm and right leg easily. He can also rip off his own arm easily. After absorbing the Menthuthuyoupi and Shaiapouf, he could knockout Knuckle and Meleoron with a tap on the shoulder. However, there is a possibility of this being used with Nen.

Immense Speed and Reflexes: Meruem can rip off limbs and obliterate entire bodies in less than a instant. He can move at extremely fast speeds when fighting Netero despite Netero landing multiple strikes upon him, he later than began to rip off Netero's left  arm and right leg in a flash by also dodging Netero faster-than-sound attacks. After absorbing Menthuthuyoupi and Shaiapouf, he gained the ability to fly, allowing him to move at super-sonic speeds in mere seconds.

Immense Durability: Meruem is extremely durable as he was able to take thousands of incredibly-powerful super-sonic blows from Netero without suffering even a single scratch. He was also able to take on Netero's most powerful move, the Zero Hand, which launches Netero's entire aura upon his opponent and he only received cuts and bruises. He was able to survive the ultra-powerful explosion of the Old Man's Rose that was released after Netero's death and despite his body being nearly destroyed in the process, however, he was still alive after the fatal attack.

Immense Agility: Meruem is able to move from angle to angle deftly. Immense pain resistance: Meruem was able to survive Netero's Zero Hand while not appearing to from be different in the least, and he ripped his arm off without hesitation.

High Intelligence: Meruem has extraordinary intelligence being able to learn and master nearly anything he comes across of, he also uses his intelligence for Gungi in his battle against Netero and eventually succeeds by doing so. Also, seeing as how he epitomizes the meaning of melting pot, his intelligence is far beyond the likes of even the most intellectual humans.

Enhanced Perception: The time that he spent when playing Gungi with Komugi have greatly bolstered his skills in perception and gave him supernatural foresight, as he can disrupt the flow of his opponents efficiently.

Excellent Strategist: He can create quick and effective means to defeat Netero during his intense battle and found a way to elude through Netero's powerful defenses and was able to severely injure Netero in the process. Proficient in hand-to-hand combat: Meruem relies almost entirely on swift single blows bare-handed, including his deadly tail. He is able to decapitate anything in an instant. 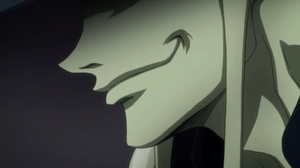 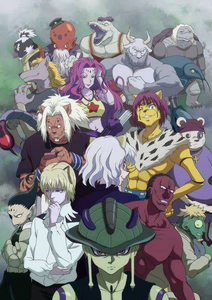 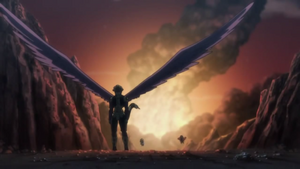 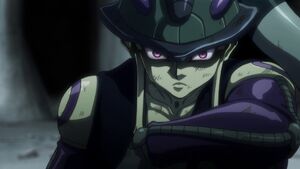 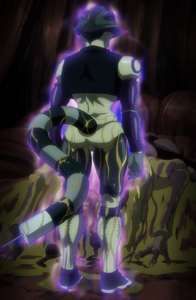 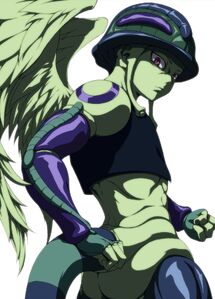 Meruem aka The King. 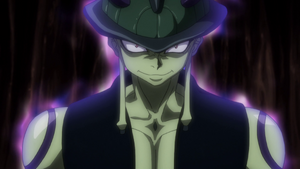 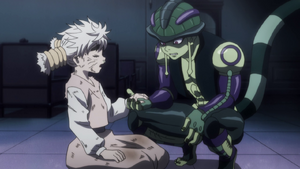 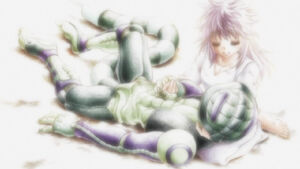 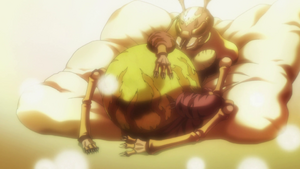 Meruem inside his mother 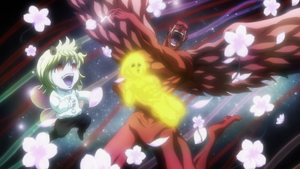 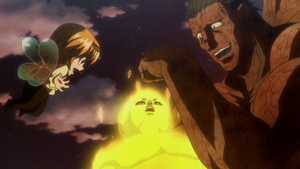 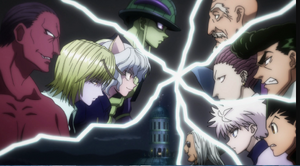 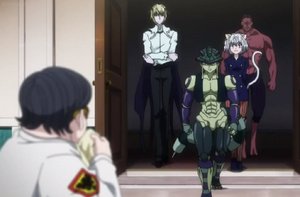 Retrieved from "https://villains.fandom.com/wiki/Meruem?oldid=3406932"
Community content is available under CC-BY-SA unless otherwise noted.