Head of the Parade of Hope charity foundation

Continue forcing all children's television hosts to do ice shows.

Mervyn "Merv" Green is a supporting antagonist in Death to Smoochy. He is a corrupt businessman who is the head of the Parade of Hope foundation.

He is portrayed by Harvey Fierstein, who also portrayed Heat Miser in The Year Without a Santa Claus,

Green runs the Parade of Hope for many years since it was founded in 1964. His organization has been raising money for children's hospitals and been vendors for ice shows presented by Kidnet.

But Mr. Green himself has a very shady side. He even collecting the money for himself on the side. He hired some bodyguards of his own and have his own people make sure nobody back down on any ice show they demanded nor ripped them off. Thinking like a true mob boss, if anyone crosses him or do not do what they say such as doing an ice show, Merv will have that person pay the terrible price such as horrible accidents, body injuries or the Parade of Hope's personal favorite, shot and neck snapped like a twig, which is the corrupt charity group's calling card.

Six months later after Rainbow Randolph of the Rainbow Randolph Show got arrested, Merv Green's most favored partner-in-crime Burke recruited Sheldon Mopes (also known as Smoochy the Rhino). But Merv warned him to simply do not make him lose his smile. He too warned Frank Stokes to keep eye on him as well as to keep making money for him without any question.

Merv Green approached Sheldon Mopes, the star of the Smoochy the Rhino kids' show. He "offered" Sheldon a ride on his limousine in order to talk to him. Sheldon agreed when Mr. Green held a gun in his coat, and got in his limo. Merv Green representing the Parade of Hope, warns Sheldon to do an ice show for him. To Sheldon's realization, it is not negotiable, but he still refuses.

When Mr. Green got word of Sheldon finally ready to do an ice show, but wanted to cut out the vendors including the Parade of Hope themselves, this news upset him. Burke Bennett, who worked for Merv Green, talked with Green about the situation that Sheldon created. Green agrees and decided to order his men to kill Sheldon Mopes.

When the TV news reported the death of former boxer and co-host of Smoochy the Rhino, Spinner, Merv Green realized his two henchmen have stupidly killed the wrong rhino (which occurred while Sheldon and Nora are preoccupied elsewhere). This resulted in Merv going into hiding until he was captured. Irish mobster Tommi Cutter, Spinner's dear cousin, swore to avenge his death and to defend their best friend Sheldon Mopes who is still the target of not only Rainbow Randolph, but now of Parade of Hope. Later, at an ice skating rink, Tommi informs Sheldon that the Irish Mob found and captured Merv Green. Tommi explained the evidence includes the calling card of the Parade of Hope (shot and neck snapped like a twig). Nora knew that Merv Green was bad news since they met and Sheldon is willing to see Merv going through the criminal justice system in New York. But according to Tommi, Merv Green was already taken cared of, so he would not have to worry about the police coming after him. He was last seen at a warehouse with his bodyguards' dead bodies on the ground while he himself is tied up to a chair. He claims that killing Spinner was an "honest" mistake. Tommi decided that he deserves death (believing that he knows some good fairytales) by claiming he should be told a fairytale about himself getting beheaded with an axe, and orders her minion, Danny to do so (which the beheading occurs off-screen), much to Sheldon's shock. They also took his head and played with it a little (but Sheldon did not want to hear anything more specific). After that, Green's head was found in the Grand Concourse. Burke and Frank Stokes would later suffer a similar fate by being at the mercy of Tommi Cutter and her mob. 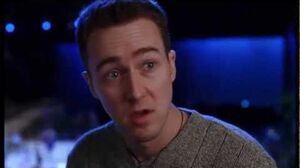