One of the Outer Gods

Unfathomable; but appears to be set on destroying the planet when encountered.

The Meta-God is a supernatural alien entity and the final antagonist of Shadow Hearts, and portrayed as one of the Outer Gods. It is an immaculate, amoral, cosmic horror said to be mistaken for the Judeo-Christian God because of its role as creator of the Earth. Albert Simon summons the creatore with the intent of using its power as a means to purge the planet before remaking it as the perfect world.

According to Roger Bacon, the creature we would call God created or rather catalyzed the creation of the planet and life on it. Roger just barely presumes to guess why Meta-God made the planet and implies that it must have been some sort of science project on His part having to do with the nature of mortal sentience and after the evolutionary designs were imposed on life at the beginning of the planet's forming, Meta-God left to the center of the cosmos to attend to His other affairs. Albert Simon used Roger's book, the Codex of R'lyeh, one of the Three Ancient Tomes, to trigger the Float, a sort of alarm system set to go off if the experiment that was the earth ever went bad and needed to be cleaned up.

Though Albert waited years to gather the proper power source to set off the Float early and spent even longer testing out the Codex of R'lyeh's sister books, the Pulse Tract and the Émigré Manuscript, he does eventually succeed in his quest upon provoking Yuri Hyuga and the rest of the protagonists into fighting him on the ritual site and using the energy they expended as the fuel to power it.

Once the Float is raised, Meta-God begins the journey to Earth to wipe out all life of His presumably flawed experiment. Albert was apparently just waiting for God to come and leave and had no direct communication or pact with Him. Meta-God was not arriving to cleanse the planet or redeem the wicked or anything so Biblical, but rather was just coming to indiscriminately destroy all life and leave. Albert's plan was to absorb the power of one of His “Angels”, the Messiah, and in the wake of Meta-God's destruction of life he would remake the world as it was before God's arrival just without the bad parts, most notably of these bad parts, Albert's sworn enemy Asmodeus/Rasputin. Announcing his plan to cleanse the planet, Albert invites Yuri and his friend to join him by sitting back and watching him remake a perfect world after God wiped the slate clean for him. Yuri has a slight admiration for the goal but refuses, far more unsure of the end result than Albert was. Albert understands Yuri's trepidation but can not call off his plan so the two agree to a gentleman's duel, both side stating that despite it being a fight to the death for the fate of the world, neither would hold it against the other. Albert, having already absorbed the power of the Messiah, transforms into an Eldritch messenger of Meta-God, eventually though Messiah/Albert is defeated and lies dying after the Messiah has been beaten out of his body. Even after Albert's defeat Meta-God marches on to His task unimpeded. Though Albert lays dying, he honors the gentleman's duel by giving Yuri and his friends a sporting chance to stop Meta-God and teleports them to God's throne to combat Him when He arrives.

God's Throne is a large summoning pentagram acting as a homing beacon in the stratosphere. Yuri and his friends arrive just in time to see Meta-God leave whatever speed He was traveling at and prepare to demolish the planet. Even with Roger's warning about God being an obscene cosmic entity, the team is still surprised/horrified by the shear monstrosity of what appears before them but, with the Earth about to be reduced to a barren rock, they know they need to give it their all. After a particularly brutal fight, Yuri and friends will manage to defeat Meta-God. As is revealed in the sequel, Shadow Hearts: Covenant, Meta-God was expelled, not defeated and presumably just returned to His place of origin because He simply met with more trouble than He cared to deal with over, what Roger clearly says must be a paltry matter for Him, the Apocalypse.

Meta-God has a wide variety of powers including mass damage multi-target elemental energy blast moves that embody natural disasters. He is also immune to all status techniques and all His moves inflect multiple status techniques on the party including an instant death effect in addition to their high damage output. Meta-God is also one of the few non-elemental bosses in the game, which amounts to having no inherent elemental weaknesses and still using elemental moves to their maximum effect. He has the power to fly and travel through space at speeds far faster than light-speed based on the distance he travels within seven days. Meta-God possesses the fire power to level planets and apparently has the capacity to create life and set evolutionary outlines for His creations at the dawn of life. He is obviously also immortal and is implied to be at-least semi-omnipotent. After reading the book on His nature and gaining their Revelations both Roger and Albert seem to have respectively gone mad, though to different degrees; This may simply be the result of Roger and Albert's stressful lives or it may mean that the true nature of Meta-God is literally mind shattering. Meta-God also has the most hit points in the game which is a very large boast even compared to the optional bosses all of which are far beyond the scoop of what the player is normally asked to deal with even at high levels. 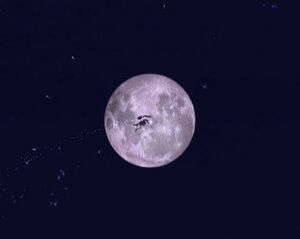 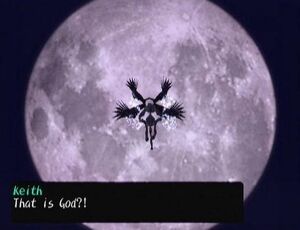 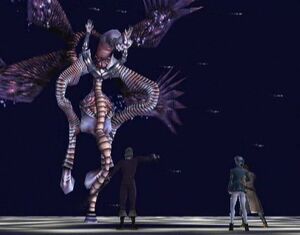 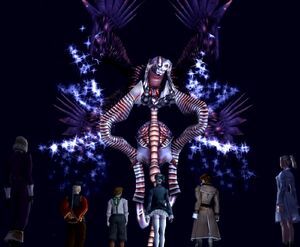 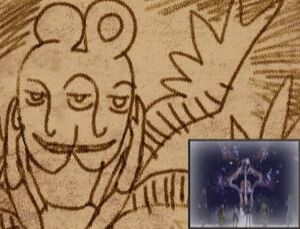 God aka the Mad God. 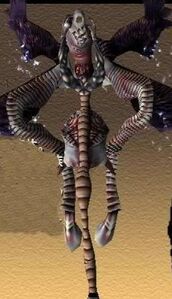